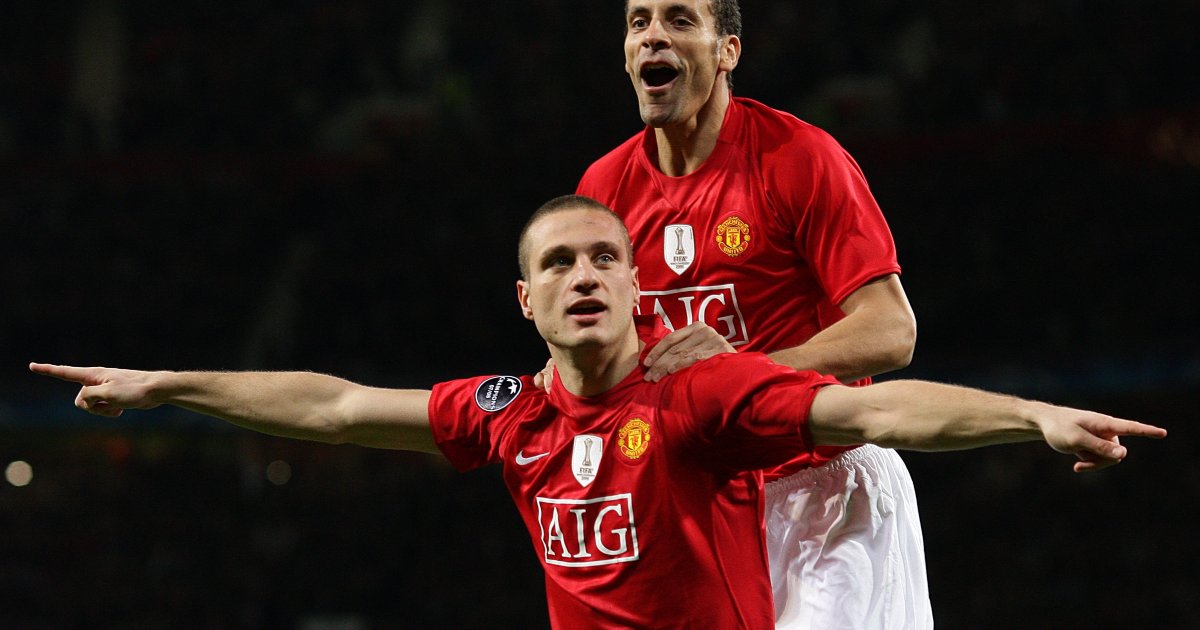 Who’s this then?
Nemanja Vidic is now 39 years old and has been retired for five years. A 6’ 3” Serb, he was quite possibly the best centre-half in the world when in his prime. However, due to a couple of major injuries, he only played 491 games and got 56 international caps. He played for five clubs, most prominently Manchester United where his partnership with Rio Ferdinand became the stuff of legend and has been nowhere near matched ever since.

Born in Titovo Užice, Serbia in 1981 he came through Red Star Belgrade’s youth academy to make the first team at just 18. His first season was on loan to Spartak Subotica, but he won the 2001–02 Yugoslav Cup with Red Star and left them in 2004 having won the Double.

By now he was already an international, playing three games for FR Yugoslavia in 2002, then for Serbia and Montenegro until 2006 and then Serbia after that, as the geo-politics of the Balkans settled down.

In 2005 he was transferred to Spartak Moscow for an undisclosed fee but was widely believed to be a Russian Premier League defender record. When Manchester United bought him on Christmas Day 2005, for £7million it emerged they had been tracking him at Red Star, where he’d been captain and had just beaten Fiorentina to his signature, by fair means or foul.

There followed nine seasons, 300 games, five league titles, three League Cups and a Champions League title.  In 2008-09 he played in the record-breaking defence that went 14 games without conceding a goal. That season saw him play 55 games for the club.

His partnership with Rio Ferdinand was one of football’s classic couplings and, season after season, the rock upon which so much of the club’s success was built. The hole he left has never been properly filled.

He finally left for Inter Milan for whom he played 28 games before announcing his retirement, since which time he’s fallen off the radar somewhat, despite not yet being 40.

Why the love?
Defending seems to have gone out of fashion, probably because you can’t easily clip some taking up great positioning, for social media instant thrills. Because crunching tackles are usually not allowed any more, seeing Nemanja flying into one, looks more shocking than ever.

But the art of stopping the ball has a long and noble tradition. Nemanja might have been the last of a breed at the top level. Uninterested in doing anything else, he was a defender’s defender who could physically impose himself; could throw himself into a 50/50 challenge and emerge the winner; could put his head in places where blood will flow. What’s more, he loved doing it. He had little ambition to be anything else.

Adebayor: “Vidic was the tough man, the nastiest, like running into a rock. He could block a striker with a single finger. He walks on you, he says sorry, he kicks you, he says sorry. He shouts at you and makes a little bit of spit come out. This guy was ready to kill." pic.twitter.com/34hffnh31Y

Notionally, he was the big hard man to Rio’s cultured ball player, but that was always an oversimplification. Vidic had plenty of ball skills too and wasn’t only devastatingly destructive. His 48 goals show just how dangerous he could be, especially at a set piece (Ferdinand retired with just 13 with over 200 more games to his name)

With the sort of watery blue eyes, big jaw and high cheekbones that could have landed him a gig modelling on the runways of the big fashion houses, the big hard man defender, less popular under TV’s more narrow vision, is always a hero in the stadium where his use of space, positioning and off-the-ball tracking, is more evident in the live widescreen environment. As he wins towering headers, charges at a crossed ball and heads it to the halfway line, tracks a striker, pounces and clears him out, all of this is grist to the football fans’ mill, every bit as much as dynamic attacking play ever has, is and ever will be. The well-defended 0-0 thrills far more than any 7-0 hammering. It was every bit as great a part of the game and yet do we see anyone defending like Vidic defended now? No, we don’t. We have lost something wonderful.

While United’s strikers took all the lion’s share of the plaudits for the team’s success in this period, it was all built on a rock solid, reliable defence.

Michael Carrick said of him: “Simply the best out-and-out defender I’ve seen. Aggression and desire to win at all costs, scared centre-forwards to death!”

His boss, Sir Alex Ferguson said “Vidic was a dour, uncompromising sod. He was a proud Serb. In 2009 he came to me to say he might be getting called up.

Robin Van Persie was in awe of him. “When I think of him as a footballer, Nemanja puts his head where other players are scared to put their feet. That’s Nemanja. At corners I’m always helping the defenders and he’s always close to me. I’ve seen him, time after time, diving with his head forward to block a ball. When I’m witnessing that, I’m scared for him.

“This is Nemanja. It’s unbelievable. I count him as one of my best friends.”

It is surely rare that any player, in any position, gets this sort of acclaim and loyalty from his team-mates.

His one major blemish was in getting skinned by Fernando Torres, bringing him down and getting sent off. But then, every player has one weakness and United did leave him very exposed at times.

After watching a lot of him today, it’s interesting to note that he defends using his whole body, sometimes half tackling, half falling to block a ball and even heading it away while lying on the ground. This was defending as a total body experience. Whatever you could get in the way of the ball, you used it without fear that VAR was going to neuter, via some sort of ridiculous geometry, your magnificent physical achievement.  Again, this is what we’ve surrendered to the digital eye bossing the analogue soul.

As well as the obvious things to love about our man, the fact he only cost United £7million and that I’d wager most of their fans hadn’t heard of the Spartak Moscow player before they signed him, made the surprise that he was absolutely brilliant, all the sweeter.

This is a very different and more satisfying thrill for fans. It’s one thing to sign someone for a big fee that you know is great who then  turns out to be great. That’s playing to par; a little too predictable. The sort of thing the shallow crave. That you sign someone you’ve never heard of for a modest fee who is plying their trade in Russia and they become the best centre half in the country, well, that’s the stuff of spine tingles.

In perhaps the most fitting goodbye possible, Nemanja Vidic has a face covered in blood during a game at Southampton which was his 300th and final match for United, May 2014. pic.twitter.com/4OQsXnZRF9

What the people say
Time moves quickly. That it’s already five years since he retired and seven since leaving United, it feels like he belongs to the era when United were successful and predominant and that feels a long time ago now. Seeing clips of him now feels nostalgic for a time that seems distant, a time before the curse of VAR. Even so, plenty of people recall him fondly, perhaps just because of that. We begin with a 4_4_haiku

Adamantine man
No way through by air or ground
Impermeable

– At the end of an interview after a defeat I asked him what the team would learn from what happened… he laughed for 20 seconds and walked off. Magnificent. Dan Walker. Presenter.

– No nonsense, hark back to the old school, will put his head where it hurts, centre half/defender. While he could play a little, his style complemented Rio Ferdinand perfectly. To think there were doubts about him early on!

– It’s rare to see a man who looks perfect to play his position. Vidić looks like he was carved out of granite, absolutely perfect for a centre-back.

– His trajectory from calamitous debut against Blackburn to one of the best defenders showed some great mental strength.

At the end of an interview after a defeat I asked him what the team would learn from what happened… he laughed for 20 seconds and walked off. Magnificent.

– Something of a successor to Roy Keane in terms of the never-say-die attitude he brought to United, and one of the best blood-&-thunder defenders around. A throwback to when defenders were fearless and resolute first, and a perfect compliment to Ferdinand’s ball playing grace.

– Arguably one of the bargains of the century. Half a Jaap Stam, 8 years after we signed Jaap Stam. Hard as a coffin nail and unrelentingly dogged. He was the perfect foil to Rio Ferdinand, forming one of the game’s best ever CB pairings. I’m told he was a handsome chap as well. Also one of only three players to have won Premier League player of the season twice, with Ronaldo and Henry. Which I find to be quite weird, but impressive nonetheless.

– His last minute winner at home to Sunderland in 2008. Horrible goal of course but just a great moment and manic celebration from Vidic. It was during the time United kept 14 clean sheets in a row and at that point he just seemed to encapsulate the United team of that era.

I think this gif says more than my words ever could. pic.twitter.com/3t5TQp6dJG

– Warrior. Can’t picture his face without it being covered in blood.

– A brilliant defender. Could imagine him as a baddy in a Jason Statham film, but would knock 7 bells out of him.

– Vida loved defending & you could tell, it’s what made him exciting to watch; you knew he was fully committed, & the other team knew it too, so I think he used that to great effect in his game once he got bulked up.The no-nonsense tackling & definitely the heading – it was just lovely.

Not this time Leo.

Following in to score a last minute winner, like every good centre forward does…

Some highlights. Defenders defending in slow-motion really is a beautiful thing. Also who doesn’t like a lying-on-the-deck-defensive-header?

Future days
That I can imagine him having a career modelling in adverts for Calvin Klein’s underpants probably says more about me than him. But you can, can’t you? Don’t deny it. ‘Vidic’ sounds like the name of an overpriced scent, with notes of grass, sweat and blood.

He’d also make a great bouncer at a fashionable club, dressed in a tuxedo, sorting out trouble with an insouciant ease, the mere threat of him breaking you into pieces enough to calm the troubled waters.

But since he retired, he doesn’t actually seem to have been involved in football at all, let alone underwear. Apart from a couple of interviews, he seems to be taking a break from football. Considering everyone from that era who can speak English seems to have a career at the club or in the TV studio, this is perhaps more remarkable than it should be. After all, he’s still only 39 with more than half his life still ahead of him. He will always be the most popular Serb in Manchester and rightly so.