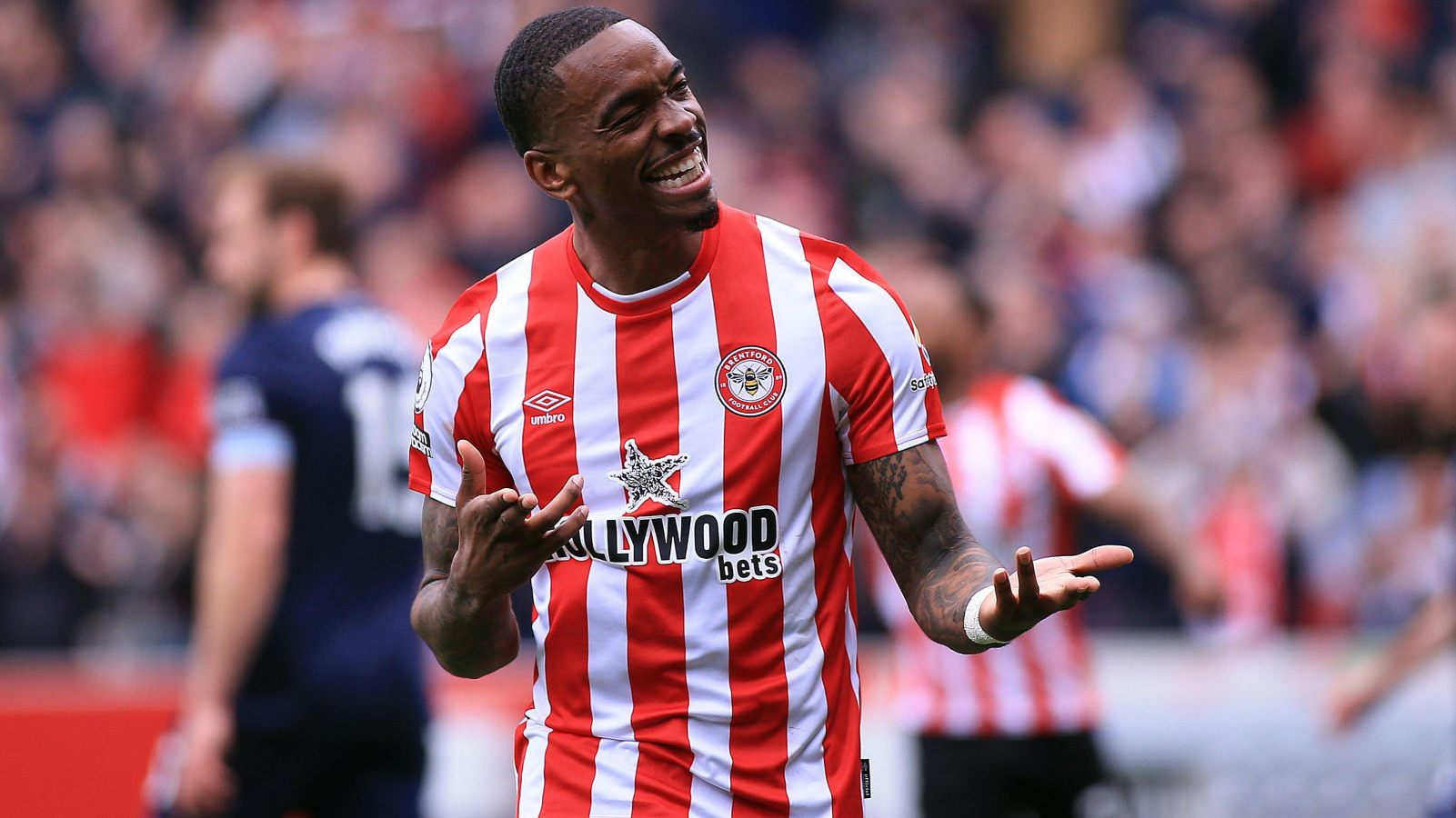 John Nicholson pays tribute to a goalscorer who rose through the Football League to find his level in the top flight. And he’s probably not done climbing…

Who’s this then?
Ivan Benjamin Elijah Toney is a 5ft 10in 26-year-old striker, who currently plays for Brentford. He got his start at Northampton, his hometown when he was just 16. This made him the Cobblers’ youngest-ever player. He spent three seasons there establishing himself, scoring 10 in 44 games in 2014-15. His performances attracted the attention of Wolves, but the move fell through, and then Newcastle United, back when they were owned by someone who abused people’s labour but at least hadn’t killed 150,000 people including 10,000 children.

The Mags put their hand down the back of the sofa, rummaged around a bit and pulled out £324,000 from amongst the crunchy tissues, biscuit crumbs and Monster Munch bags for his services. However, after a couple of appearances in the Premier League and in the League Cup he was loaned out to Barnsley. Although he only notched a couple of goals in his 21 appearances, nonetheless he was part of that successful team which won the Football League Trophy and the League One play-offs. So even though he was still only 18, he had two winners’ medals, something he wouldn’t have got if he’d stayed at Newcastle.

Even so, the Magpies sent him out on loan again the following season, this time to Shrewsbury for half a season and then Scunthorpe United. In that 2016/17 season he played 43 games and scored 14 times for two clubs.

The 2017/18 campaign saw him play for Wigan and Scunthorpe again for a total of 46 games and 14 goals again. He got his third winner’s medal from his half season at Wigan who went on to win the league.

After all these loans, it was time for some club to commit to him. He was obviously a talented striker, if a raw one. That club was Peterborough United who parted with a mere £351,000 for him. Now in his early 20s, he really hit his straps and began firing goals in on a regular basis and turning in some tremendous performances, including a hat-trick against Bradford City in the FA Cup. A haul of 23 goals in 55 games was impressive for his first season but 26 in 39 the next campaign was even better and won him EFL Player Of The Year.  The 2019/20 season was shortened due to Covid-19, so he’d probably have scored even more.

Far too good for League One, the ambitious Brentford shoved £5million into Posh’s pockets, whispering, “take it, there’s more where that comes from” and drove him back down south. It was the most money Peterborough had ever received for a player.

Although this was his first time playing in the Championship he took to it immediately. His 31 league goals set a new record (now beaten by Aleksandar Mitrovic) His 33 strikes in 52 games basically got the club promoted. He was the difference maker for Brentford who had just failed to go up previously and rightly won Supporters’ Player of the Year as well as the Golden Boot.

So would he be any good in the top flight? Plenty – including Mitrovic – have proven unable to take the step up, but Ivan was not destined to be one of them. His tally of 14 in 33 games to date has been impressive. More crucially, when he was out of the Brentford side with injury, they began losing games. They just don’t function as well without Ivan up top. Add in Christian Eriksen and voila, you’ve got a well-oiled machine punching way above their weight.

He could play international football for Jamaica but he fancies his chances of an England call up and had Covid not got in the way, may well have had one by now.

Why the love?
The fact that Brentford didn’t function as well without him gives us the key to his success I think. While he’s scoring plenty of goals, he’s got some magic in his feet, capable of all manner of tricks and flicks to beat a defender. He works hard in midfield to gain possession and feed a runner. And like all good strikers, he hits it early and often.

He’s scored 47 times for Brentford but his assist number is 15 and that shows a striker who is connecting midfield to attack as well as being on the end of movements. This is essential in Thomas Frank’s preferred high energy pressing but flexible 3-5-2. Across his whole career he’s notched up 53 assists.

He’s also taken a little bit of the lower league physicality into the top flight and I love that. This is no lightweight who will start pouting about how unfair it is that someone has almost touched him, he’s hard to knock off the ball and has an intensity to his play which hounds defenders and pounces on mistakes.

That physicality is particularly useful if Brentford want or need to play the ball long because he can win aerial duels and hold the ball up. At 1.85m he’s far from the tallest striker, but he uses his strength well when he needs to.

Predominantly right-footed, he’s netted 99 with his right, 15 out of his career total of 144 with his left and 30 with his head. Seventy-eight yellow cards and four red in his career, (two straight red) probably indicates he’s no stranger to the aggressive side of the game.

Some strikers give you the impression that they’re just having a purple patch, especially in a first top flight season, but Ivan isn’t one of those. He’s reaching his peak years and has both the confidence and skill to establish him as a top Premier League striker.

If you want to go long, he can do that as well…

Future days
Along the way there have been a few controversies for Ivan.  There was the business of the racist Ivan Toney song, which he understandably asked Peterborough fans not to sing, and his stance against taking the knee. But through it all he’s kept on scoring.

Remarkably, he’s not spent three seasons at any club since leaving Northampton and you can be sure that there will be plenty of potential suitors after his signature this summer. Even though he’s under contract until 2026 and earning a million quid per year, we all know goalscorers are the most desired and highly-paid players and someone of his quality could easily quadruple his wages.

Some have suggested he’d be perfect for Arsenal, others that Spurs might take him and Eriksen as a partnership. That might not be a bad shout.

Obviously, Frank is a superb manager who knows how to get the best out of him and Brentford are on an upward curve with a new-ish stadium, so he may be well advised to spend another year there. However, if the moneybags clubs turn up with a lot of cash in a very big bin bag, the club may not be able to resist selling him. Attention will turn to whether he might make the England World Cup squad, a strong start to next season is probably essential for that to happen.

Already something of a journeyman – Brentford is already the eighth club he’s played for – he’s worked his way to the top flight by playing at every level and that is more rare in 2022 than it ever used to be, so he deserves a lot of kudos for achieving that and, for when he got to the top, actually performing really well.