Football just isn't the same as a hedge fund, and Sean Dyche must know that really. 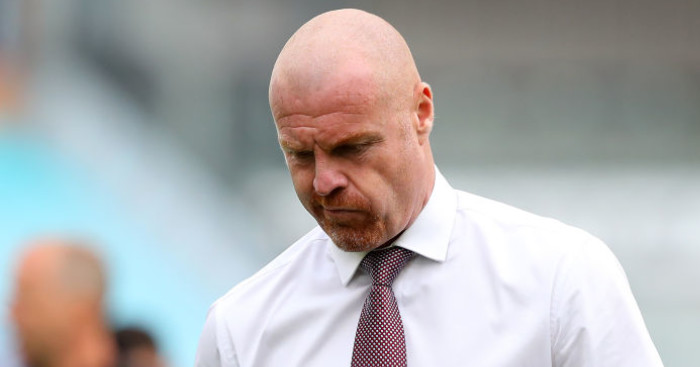 ‘You can’t just measure football on its own — there are lots of businesses out there that are making huge sums of money who could therefore protect businesses in their line of work.

‘If you are going to apply it to football, you have to apply it across the country to everyone and every business, then you have a balanced and fair look at it.’

It was an odd thing to say. I think most would assume that Dyche would be sympathetic to grassroots football and wouldn’t sit in his £70,000-per-week ivory tower and cast his pearls of wisdom in front of the swine with such lack of thought.

He is making an obvious false equivalence, seemingly suffering from the delusion that football is like any other business. It isn’t.

Football clubs can’t be compared to restaurants or hedge fund managers because they do not operate like a normal business. A restaurant isn’t given up to £160million of free money every year just for opening its doors, for a start.

No other business has customers who will pay the club money every year of their life regardless of the quality of the product being offered up by the team. If a restaurant serves up rubbish food, no-one goes. If Burnley offer up rubbish football, thousands will still be there to see it. A football club isn’t judged like any other normal business. It plays a role in the life of many people and their community that is akin to an institution rather than a store or stock trader

A hedge fund manager’s job does not have historical heft, or give focus and self-identity to people of a whole town. It does not have any sort of community value at all. It is not supported by generations of families. It does not have a meaning or value that cannot be measured in monetary terms.

A restaurant doesn’t need other restaurants to exist in order to allow itself to exist, but football clubs need other clubs to play. If lower league clubs go out of business, who will Burnley get knocked out by in a League Cup humiliation?

And that’s before we get to all the small but myriad ways in which the football pyramid supports, feeds and enhances the top flight. And it is also ignoring the fact that sooner or later, Burnley will be back down in the boondocks and the lower league reality will be their reality, with all the millions in free money gone. At that point, the old-fashioned maxim of ‘you’re welcome, we can spare it’ might have more weight.

Someone should remind Sean Dyche that Burnley spent 30 years outside of the top flight floating between the 2nd and 4th tiers until the late 2000s, and that this is essentially a game of musical chairs

So, the idea that football has to be treated like any other area of the economy is simply inappropriate. I realise that multi-millionaires who earn three times the national annual average wage in a single week can lose their grip on reality, but the idea that giving a couple of million quid to a League Two club in order for it to be able to survive for a year has any sort of a parallel with giving money to an unsuccessful hedge fund manager is fatuous in the extreme and all the more galling that it should be suggested by the manager of one of England’s great old community clubs.

Obviously, all those who get turned on by thinking they’re the unflinching hard men of capitalism will say that Dyche is just telling it as it is. Business is business, the winners can’t bail out the losers, and all that nonsense. They are the cause of so much misery, poverty and exploitation, we should happily ignore them as the problem, not the solution.

This is football, it plays by different rules and that is ironically the only reason Dyche is so vastly remunerated in the first place. Every club is just one organ in the football body. If you lose too many, the body dies.

You can bet that were Burnley going bust at the bottom of League Two – which they were, not so very long ago – they’d want some help to survive this extraordinary situation. They wouldn’t want a multi-millionaire manager of a Premier League club telling them sorry, if we help you, we’ll have to help every other business as well and expect them to understand that what goes around comes around. I’m sure Sean knows this really. Maybe he just misspoke or was musing aloud without greater consideration. It happens. But, right here and now, it’s not helping what has become a dire situation, not just for football but for the communities of this country.