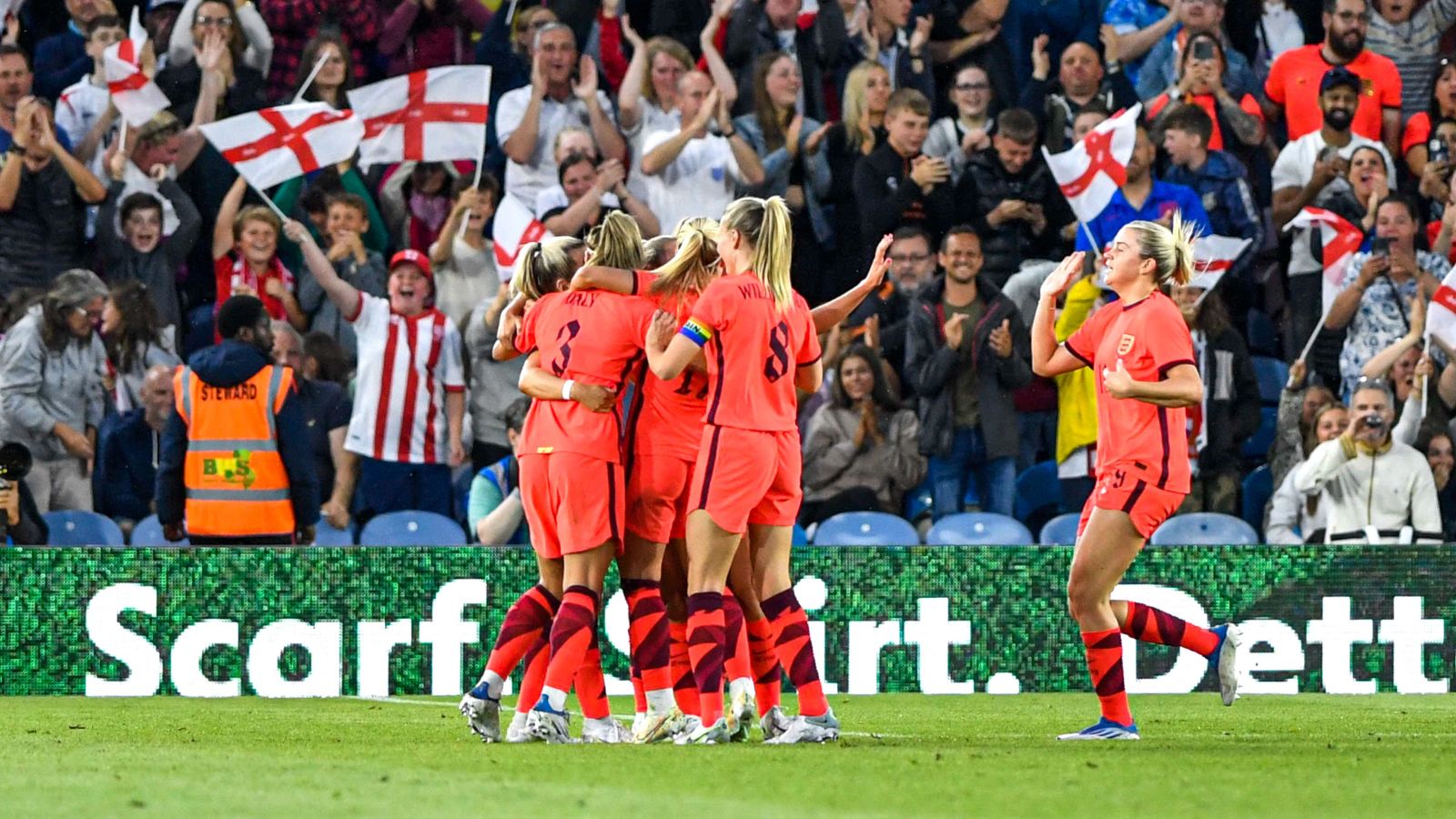 The Euros start on Wednesday. All England’s games are on at 8pm on BBC 1. A few years ago, putting a women’s football match, even an international, on at primetime on terrestrial TV would’ve been unthinkable, but that was then, that’s not now.

There are games on BBC 1, BBC 2, the iPlayer and BBC sport website every day at 5pm and 8pm from July 6 to 18, there’s a day’s break before we go into the knockout rounds, ending at the Wembley final at 5pm on the 31st; a three-week festival of football.

Demand for tickets has outstripped all previous records with 500,000 of the 700,000 available already sold. The final has already sold out as have all England games. Despite there being double the amount of tickets for 2022 than there was for 2017, the FA have been overcautious in not picking more far bigger grounds to host games. They have been caught out by the huge burst of popularity of women’s football in the last couple of years.

It cannot be overstated how front and centre the tournament will be in our lives over this period, even if you’re not interested in football or in women’s football. If England do well – even if they don’t – it will make household names of the England team, if they’re not already. This could not have been imagined even 10 years ago.

I have a pal whose teenage daughter is playing football for her local amateur club and absolutely loving it, so much so that she wants to make it her career. She saw the 2017 Euros aged 11 and fell in love with the game. The BBC said that 47 per cent of the country had watched at least some of that tournament. It was very significant. It put serious gas under the growth of women’s football that 2019’s World Cup only accelerated. With thousands of girls and women wanting to play, new clubs were set up and old clubs expanded and they were inundated with requests to play.

My friend’s daughter was lucky that her school already supported and encouraged girls’ football; only a minority did at the time. Many of the girls from her school team have gone on to play for local amateur clubs and there is now a pathway to signing for a women’s team further up the pyramid and a route to playing the game professionally.

She will have to work and play football in her spare time because remuneration, until you get into higher echelons, is pitiful. Even the average WSL wage is estimated at being around £30,000. The aim isn’t to emulate the financial insanity of the men’s game, but funding needs addressing for those on the lower rungs of the ladder.

This is a story that is being repeated to a greater or lesser extent all over the country. Increasingly, girls and women have got a route to follow to a career in football. They can see that women like them have made it and they want to have a shot at it too. Not such a high falutin ambition and one that boys have always had.

This simple bit of justice is what anyone who has supported the women’s game has always wanted and it was this that the sneerers, snipers, cynics and naysayers were trying to strangle at birth. That’s why so many people got so angry at every witless “no-one cares” comment. OK, have your loud, stupid, bigoted attitude if you must, but why should kids have their futures denied to them by it? It was always unjust and unfair. It always made the world a worse place and made girls and women’s lives harder and denied them equality of opportunity, which, I must assume is what these idiots wanted.

But despite this, those in sport and education that believed that the pursuit of equality and fairness was a basic human right, stuck with it and invested time and money in supporting girls who wanted to play football. For years they had to fight a system which favoured boys at every turn and too often put down girls who wanted to play a so-called ‘boy’s game’.

Basic rights such as having appropriate kit for girls and women were thoughtlessly ignored. Behavioural stereotypes had to be overcome and exploded. Those who said it wasn’t feminine to play football had to have it pointed out to them that they’re spewing nonsense and that whatever a female does is de facto feminine. It had to be explained why ‘ladies’ had to be replaced with women. And all the critics who said anyone supporting any of this was just virtue signalling had to be mocked into shutting the f*ck up.

Everything that has always been taken for granted by boys has had to be fought for and won for girls, often wrestling the right to be taken seriously out of the tight grip of anachronistic, chauvinist and sexist mindsets. And the fight is far from over yet. There are still stories of institutions prioritising boys football over girls, of boys being given preferential access to pitches. Too many still don’t take girls’ football as seriously as they take boys’. The 2022 Euros will hopefully help put such injustices to bed for good.

My friend’s daughter would, had she been born in any other era, have had a difficult if not impossible route to even playing football, let alone doing it for a living. That is frankly appalling. How can we have denied this to girls for so long? What did anyone have to gain by limiting a child’s options on the basis of their gender? It beggars belief but it is still happening.

Here's the full Euro 2022 match schedule with venues and kick off times. pic.twitter.com/XzUF9tolE5

Revolutions tend to be glacially slow and then very fast. So in the last three or four years, things have changed markedly, despite Covid. In 2019, the FA launched their SSE Wildcat Centres, a network of 200 girls’ football clubs which were run in association with grassroots and professional sides for the purpose of providing free training to girls on a weekly basis.

In Scotland there are 28 Soccer Centres for girls aged 5 to 12, in six regions covering the whole of the country, each with an ambassador drawn from Scotland Women’s National Team. The emphasis is obviously on just having fun while kicking a ball around, but in doing so, it dissolves the old stereotypes about what girls can and can’t do from an early age. So if they want to progress to higher levels as they get older, it isn’t some freaky weird thing to do, but just a normal thing.

For all that these changes absolutely are a revolution, the aim is simply for equality of opportunity and fairness, which should not be thought in any way radical.

If you haven’t got a ticket for the game, 8pm BBC 1. Be there. Be a part of the revolution. Be part of the future.