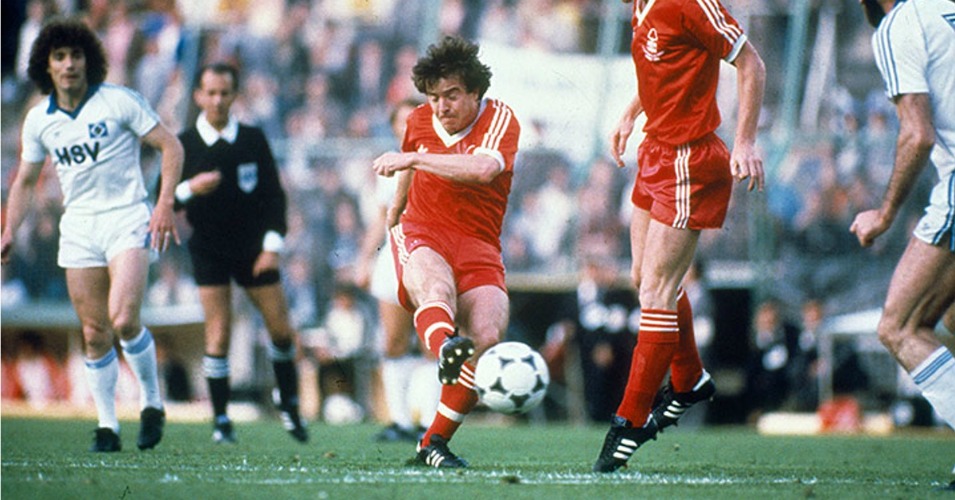 There’s a bit in ‘I Believe In Miracles’, the new film about Nottingham Forest’s double European Cup-winning side, in which Brian Clough is discussing facing Hamburg in the second of those finals. Clough had spent much of that interview looking uncharacteristically quite concerned about the prospect of facing the German side, but then talk turns to Manny Kaltz, Hamburg’s right-back and at that stage considered to be one of the best defenders in Europe. Instead of his concern deepening, a smile grows across Clough’s face, as if he’s he’s just remembered that there’s actually nothing to worry about at all.

“We’ve got a little fat guy who will turn him inside out,” he beams, about the man who most agree was his favourite player, and probably the best to ever play for Forest. “A very talented, highly-skilled, un-be-lievable outside left. He’ll turn him in-side, out.” That last bit was delivered with a slight lean forwards, a point of emphasis as if he was explaining for the thousandth time just how good John Robertson was, but for some reason people just weren’t getting it.

Robertson was an overweight and rather directionless midfielder when Clough arrived in 1975, one that Forest’s previous manager didn’t want and had nearly sold to Partick Thistle, his career drifting into nothingness. But Clough and Peter Taylor saw something in him, put him on the left wing and helped turn Robertson into a magician, going from an outcast at a Second Division side to the key man in two European Cup victories. If any one player personifies that Forest team’s story, it was Robertson.

“I just wanted his approval,” says Robertson now, 35 years on and still seemingly slightly in awe of his old boss. “I wanted him to tell me I was a good player and things like that, you know. So I broke my neck [trying to please him.]” The old line about former England cricket captain Mike Brearley was always that he ‘had a degree in people’, and from the way his former charges talk about him, it sounds like Clough could have taught that particular course. “He could read you, he was brilliant at that,” says Robertson.

Clough and Taylor usually (and perhaps rightly) get the credit for that miraculous Forest team, and for teasing the talent out of their players, but they couldn’t have done a thing without that talent being there. Robertson might have looked like a shuffling nonentity off the pitch, scruffy and overweight, but on it he was delicate, almost dainty as he approached full-backs with subtlety but purpose. He wasn’t a player with a plethora of fancy tricks, nor was he one with any pace to speak of, but he was still a magician, a hoodwinker of defenders who seemed to treat every encounter with a full-back as a confidence trick. One that they would fall for every time.

One of the things you notice after watching Robertson for a while is that he takes a lot of touches, gently keeping the ball at the closest of quarters before he either shimmies or drops a shoulder and leaves his opponent sprawling. It’s like a boxer administering a series of left jabs to keep his adversary at bay before they’re floored by the right upper-cut they sort of knew was coming, but couldn’t do anything about. Without the tricks that traditionally make a winger great, Robertson could still turn games on his own, creating something from nothing in a way that few others could. Jimmy Gordon, the Forest coach, compared him to Stanley Matthews and Tom Finney but “with something extra on top”. And yet many of a younger generation might not have heard of him at all, never mind know how good he was.

One of the striking things about the film, and Danny Taylor’s brilliant accompanying book, is how keen his team-mates are to laud this under-lauded wonder. John McGovern compares him to Ryan Giggs, but better and “with two good feet” while labelling him as the most influential player in the world for a few years. Archie Gemmill, who played with some pretty decent midfielders in the Scottish team of the late 1970s, calls him a “genius”, Larry Lloyd says he would “drop his shoulder to the right, the full-back would go to the right, 30,000 people would go to the right. He’d put his fat arse to the right – and then, hey presto, he was off, down the left…He was slower even than me, but that little fat bastard was a magician.” It’s as if his old pals are trying to right a horrendous wrong, to ensure that Robertson is recognised as the player he was.

Not that you’d hear that from the man himself, mind. “I am, I am,” he says when asked if he was embarrassed by all the praise that has come his way. “I’m flattered, don’t get me wrong, I don’t want to patronize and say I fucking hate it – that’s rubbish, but it’s…I don’t think like that. I was part of a great, great, great team. They never…they weren’t fashionable, if you like.”

And from there he wanders into a reverie about how great the rest of his team were, taking the attention away from himself in a manner you wouldn’t expect from someone who’s frequently told he was a genius. But it’s rather endearing and part of what makes ‘I Believe In Miracles’ so watchable; as keen as his team-mates are to praise him, Robertson seems more irked, 35 years on, that those team-mates, often characterised as a team of off-cuts and misfits patched together by Clough and Taylor, didn’t get the same credit.

“We were in the middle of nowhere in Nottingham, a one-horse town as they probably called it, but we weren’t fashionable and I think that grated,” he says. “And I also didn’t like the other thing about [us being a] rag tag and bob tails team, because I think that was totally unfair. Kenny Burns was scoring goals with Trevor Francis at Birmingham…Larry Lloyd had a brilliant career at Liverpool, he just had a bad year at Coventry…Peter Shilton was the world’s best goalkeeper. ‘Journeymen’ – that’s horrible word as well, because that’s far from the truth. You don’t go and win European Cups being journeymen, my friend.”

As it turns out, Clough was right not to be concerned in that pre-European Cup final interview. His favourite player scored the only goal as Forest won 1-0. You don’t do that sort of thing if you’re a journeyman, either.

<i>I Believe In Miracles, the film, is out now on DVD and Blu-Ray. The book, by the Guardian’s chief football writer Daniel Taylor, is also out now.</i>