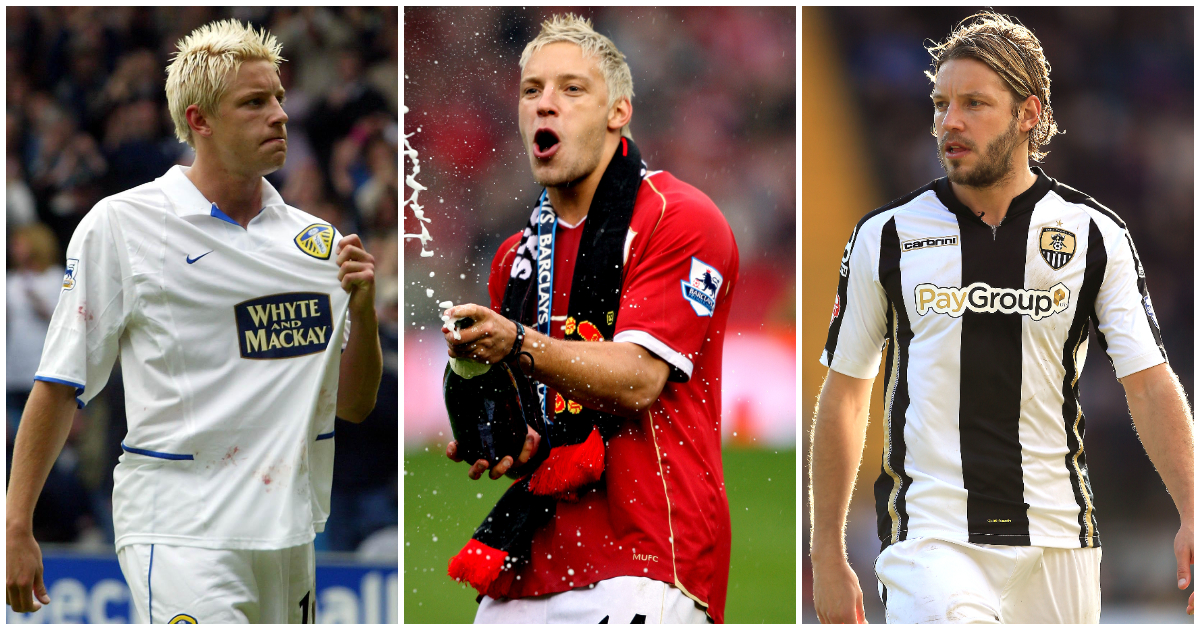 Johnny Nic remembers the homegrown Loiner who swapped Leeds for Man Utd. They might forgive, but they probably won’t forget…

Who’s this then?
Alan Smith – no middle name, that would be too frivolous – is now just 40 years old. Born in Rothwell, Leeds, he played initially as striker and later as a midfielder in a 20-year career which saw him play 605 games and score 72 goals. He also played 17 times for England between 2001 and 2007. That he enjoyed such longevity is remarkable considering the terrible injuries he suffered along the way. But then, they make ‘em tough in Leeds.

He broke through the Leeds United youth ranks to the first team at a great time in the club’s history, in the 1998-99 season. For his first Premier League game, he came off the bench and scored with his first touch within three minutes. At Anfield. That was the sort of determined ruthless character he was as a youngster. He would not be stopped, would not back down and would go in with both feet. It was a trait that saw him rack up 130 yellow cards, be sent off 11 times and earn five straight reds in his career.

His best season for goals at Leeds was 2000-2001 when he netted 18 times, the only time he got into double figures for the club. A versatile player, manager David O’Leary pushed him out to the right wing. He won Supporters Player of the Year twice and was a big fan favourite for his combative attitude which somehow just seemed very Yorkshire.

But Leeds were in financial trouble and were relegated in 2004. To say the fans didn’t take well to his transfer to Manchester United was an understatement, however, the fact was Leeds couldn’t pay his wages, only United offered the money and the club would only sell him to United, so in effect, he had little choice but to go or to put Leeds under, despite once saying he’d not play for their close rivals. None of this made any difference to fans, who either didn’t know or didn’t care and they abused him terribly anyway. Christ.

In his first season at United, he scored ten goals but boss Sir Alex Ferguson wanted to turn him into the next Roy Keane, prowling the midfield, seeing the same fierce determination in Smith as in the Cork man. But this never really came to fruition. In February 2006 when blocking a John Arne Riise free kick, he broke his leg and dislocated his ankle. Ouch. That put him out for over nine months and it’d be 13 months before he started a United game again and 14 before playing a full 90 minutes in the 7-1 thrashing of Roma.

He left United after playing 93 games and scoring 12 goals and went to Newcastle for £6 million. It was a difficult four and a half seasons, with a stress fracture meaning he missed almost an entire season. He did well in the Championship in midfield earning the club promotion however, there was always a feeling that he wasn’t a fully formed midfield presence and was sort of filling in. This may have been unfair.

Finally he dropped down two divisions to go on loan to MK Dons in January 2012 for whom he played 83 times before ending his career with five seasons at Notts County, latterly down in the boondocks, before hanging up his boots in 2017-18 after 108 games for County.

The turmoil there saw him be a player manager on and off for a while and even took charge for a game. He left three years ago and is now apparently in Florida coaching at the XL Soccer World Academy, which sounds like nice work, certainly better than being booed by unforgiving Leeds fans.

As a striker he seemed like the real deal, aggressive, fearless and direct. He scored some great goals but injury, and circumstance, robbed him of the stellar career he surely would’ve had. Did he ever really convince as a midfielder? That is open to question, certainly at the higher level, but he played that role longer than he did striker. That last six and a half years of his career he played in the third and fourth tier, just to be able to be involved in football, even though he couldn’t hack it at a higher level, showed humble grit and determination. But then, that was never something he was in short supply of.

🌟 We've all got fond memories of *that* #UCL night against Roma…

But none more so than the star of our latest UTD Podcast, Alan Smith 🎧#MUFC pic.twitter.com/OCEAuQY7lk

Why the love?
His six seasons and 228 games for Leeds United cemented a reputation as a fierce and fearless player. The sort all fans love; fully committed and quick to tell the opposition and anyone else who got in his way to f*ck off. With his bruised purple-red lips set in a sulky sort of pout, he was moody and passive aggressive. This is an attitude that anyone born in Yorkshire knows comes with your mother’s milk and is worn like a winter overcoat, in order to keep the world at arms length.

Alan was very much the fan on the pitch, which made their rejection of him all the worse. To say it was unreasonable is an understatement. The club was a fiscal basket case and he was one of their most valuable assets, so of course he got caught up in finance and politics beyond his control. Why fans couldn’t see and understand this, remains a mystery. It was if they wanted to hate him in order to punish themselves for loving him. That would be a very Yorkshire thing. I speak as someone born in the county.

When he went to Manchester United I remember being excited to see him in red, feeling he would be a great asset for them. Briefly that looked like it would be the case with a cracking goal scored against Arsenal in the Community Shield and against Norwich City in the league. How quickly and unexpectedly can things change in life.

As Riise stood over that free kick, Alan, who had rarely been injured to this point, could have had no idea how what would happen next would change his life. From that moment, he almost had to re-learn or re-educate himself in football terms. Yet he remained a popular player for his tireless work ethic and his commitment. That he only scored five goals in the last 10 years of his career is a peculiar anomaly for a player who scored 68 in his first 10.

In those Leeds years, he was one of my favourite players. It’s always hard not to love a player who is hard and will not back down no matter what, perhaps especially a striker. You might expect such a thing in a defender, but the forward who is gnarly and fearless is an imposing figure and even though he was young, his was an easy art to enjoy.

That he kept on playing for years when it was obvious that he wasn’t capable of meeting higher level standards was typical for a man who had more than the usual share of bloody-mindedness.

At his peak for Leeds he could be a bit of a liability, clattering into tackles and wiping people out with jaw jutting and what I used to call his f*ck off face in full effect.

If he played today as he played the game in 2000 he’d not last a minute. And that’s a shame, Seeing Smithy cleaning out someone was, like seeing David Batty who he played alongside, do likewise, was one of the things worth paying money to see. The Leeds side that battled their way to the Champions League semi-final did so as much on attitude as skill and Smith was axiomatic to that, even getting sent off in the semi-final

I think, like many, I’d half-forgotten about him after Newcastle and to see him playing for Notts County, now in his mid-30s, the bleached hair now dark and his chin handsomely bearded was a bit of a shock. The boy had become a man.

What the people say
Unlike many people featured in this column, no-one could pretend Alan was a football genius or had a stellar career. But that doesn’t disqualify him from our affections. Football needs its grafters and its hard luck stories are as important as those about great triumph. So while many might shrug and remember him as the sulky kid who booted people hard, others see someone who did a lot of hard yards and kept on keeping on often in adversity.

– If I were at home, I’d ask Dad to dig out the photo of us down at Windy Hill watching Leeds train prior to the match at Colonial Stadium against Colo Colo. Alan Smith (and all the players) signed jerseys and football cards and kicked the ball around with the kids in the park.

– Hated him at Leeds. The player to get right under your skin he never stopped. The moment he signed for United I was delighted. A proper tenacious, never give up attitude, capable of scoring some great goals. His debut goal against Norwich was a peach.

Alan Smith was a superb part of the Leeds United team that emerged in the early 2000s. The demise of the team for financial reasons and the subsequent complicated broken leg injury meant that he never really achieved his potentual. A real fans’ player.

– Such a talented player, his move from Leeds to Man Utd was quite naughty but he did okay, that awful injury he suffered was just harrowing, so glad he made the comeback, one of those players who deserved to win much more than he did.

– Feisty little fellow wasn’t he! Goes in the pot marked “hate him because he plays for Leeds/Man Utd but wish our players were a bit more like him”.

– United 7 Roma 1. 2007. The highlights of that game will never show his contribution to that performance in full. His pressing of the back 4 and keeper completely unnerved them and set the tone for the game. His finest in a United shirt.

– Looked like a right piece of work in his younger days. But I really respect the way he was prepared to prolong his career, post injury, at smaller clubs like Newcastle and Notts County.

Really talented player with just enough rough and tumble to get the fans going without getting himself sent off…..usually. Could tell that he loved playing and that really matters.

– Met him at a charity match at Meadow Lane. Great bloke, happy to pose for photos and just loved talking football.

This is what we lost when he was put into midfield…

A yellow then, a human rights crime now…

And in one moment, your life can change…

Future days
There were some extra-marital hanky and indeed, quite probably some panky too, in 2015 of the usual variety, which made the papers foam at the mouth for 24 hours.

In 2018 he apparently applied for a visa to do surfing instruction in Florida. Well you can’t do that in Leeds, can you? Not until global warming properly kicks in, anyway.

These days he’s doing coaching work with male and female youngsters at the XL Soccer World Academy which sounds like a blameless way to pass your days.

Hard to believe he’s already 40, but time passes quickly. It doesn’t seem long since those pouty, engorged dark red lips graced Elland Road. He must have much advice to pass on about how to survive adversity and career threatening injuries.

You wouldn’t rule out a return to Leeds in some capacity, at some point, though swapping the sunshine of Florida for the cold, grey misery of Beeston would take some doing. Maybe it is best not to go back.