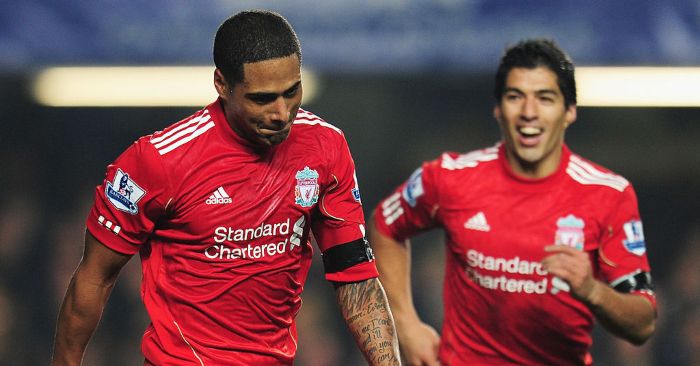 Glen Johnson has waded in on the debate concerning Liverpool’s reaction to the Luis Suarez racism controversy in December 2011.

When Suarez was banned for eight games for racially abusing Patrice Evra during a Premier League game that year, Liverpool players lined up for their game against Wigan a day later adorned with shirts defending their teammate.

It was justly criticised at the time and has been thrust back into the public sphere after former Liverpool defender Jamie Carragher issued an apology to Evra himself.

Johnson, who joined the club’s former vice-captain in wearing the T-shirts, has attempted to explain his side of the argument.

“Carra was right to apologise and I’d have to agree with him; I think the timing of it was wrong as the ban was so close.

“But in the club’s defence, they were just trying to support one of their players.

“I don’t think anyone in that dressing room or at the club believed Luis was racist or capable of being racist.

“Of course he got the ban, and I’m certainly not saying Patrice is lying, but I never heard anything, so I don’t know. Nobody heard what went on, the only people who know the truth is those two.

“I know Luis really well and I get on well with him, so I find it very, very hard to believe that he would have done something like that.

“It’s a very sticky situation for me; I’m stuck in the middle because Luis and I are good mates, and I wouldn’t be friends with a racist. I wouldn’t be. I’d be the first to turn my back on him and that’s why it’s awkward for me.

“But of course I have to apologise to Patrice as well. We got it wrong.

“I just think the club were trying to protect him knowing how much of a nice guy he is and trying to keep their ship steady.

“There was no meeting or chat about it, the T-shirts were just handed out before the warm up and, like Carra said, if one or two put it one everyone has to put it on.

“They asked if everyone was happy to wear it, and a few of the guys said it was fine, so everyone put it on.

“It was one of those moments where you’re thinking, ‘I hope I’m not getting this wrong’.”