Home Home Page Front Page Jokanovic on his future: ‘it is not only in my hands’ 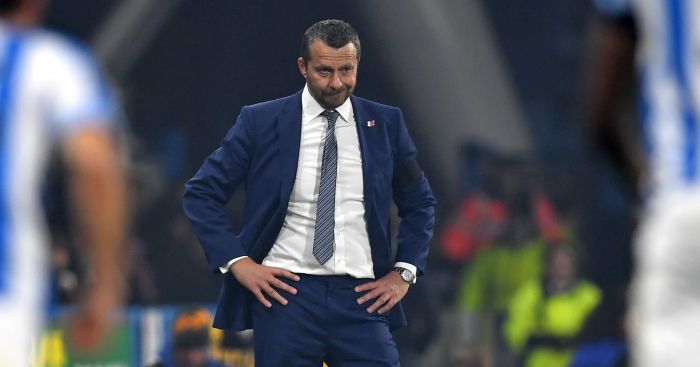 Fulham boss Slavisa Jokanovic admitted his future was in the balance after his side’s 1-0 defeat at Huddersfield.

Timothy Fosu-Mensah’s first-half own goal sealed Huddersfield’s first Premier League win of the season and lifted them above Fulham, who slumped to the bottom of the table.

It was the Cottagers’ fifth straight league defeat and leaves them with just one victory from their first 11 matches back in the top flight.

“Part of the job is in the hands of my players, part is in the board’s hands too,” Jokanovic said.

“I personally trust in myself. I will push hard. The solution can be from another side, the board can have some different views. This is part of the board’s responsibilities.

“I’m working with these people for close to three years. People know how I am working and my mentality but it is not only in my hands.”

Fulham equalled a Premier League record of 29 goals conceded in their opening 11 matches and Jokanovic was clearly disappointed in some of his players, accusing them of lacking fight.

“For some reason, yes,” he added. “I don’t know if the preparation of the game wasn’t that good, or if we didn’t understand how important this game is.

Huddersfield boss David Wagner described his side’s win as one of the most important in his time as manager of the club.

The Terriers scored their first home league goal in eight matches on the night Wagner celebrated his third anniversary in charge.

“Sometimes everything comes together on one day

” the German said. “Three years now I’ve been in charge. This was my 50th win I hear and one of the most important to be totally honest.

“After such a long period, 10 games without a win, you need this feeling.”

Wagner could not hide his relief and admitted his side’s long winless run had taken its toll.

“Obviously it’s great,” he added. “What better than after six-and-a-half months of home games, but at the minute I’m only tired.

“This evening was a six-pointer that we spoke about. I’m absolutely delighted and happy for the players, for the football club and supporters that the guys delivered.”