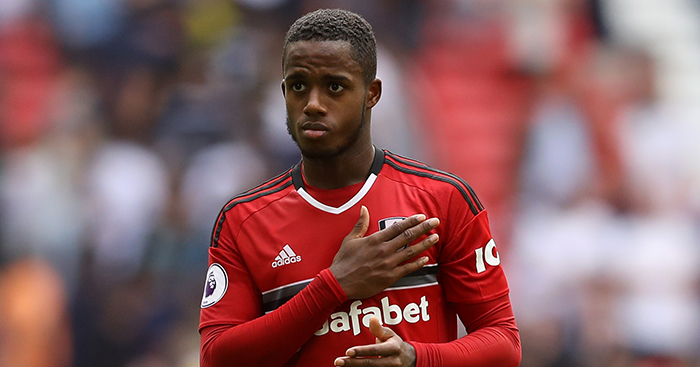 The 18-year-old’s progress has continued since the club’s promotion to the Premier League, playing in defence, midfield and in the final third, and to the extent that Fulham’s manager wants him to sign a new contract.

Jokanovic dismissed previous criticism of Sessegnon’s defending by insisting he is as natural at left-back as he has proven further forward.

That Ashley Young has been dropped from the England squad and Luke Shaw is yet to truly establish himself also means there remains a national-team vacancy on the left for a long-term candidate to emerge, and the normally-low key Jokanovic no longer believes there is a defender who can stop Sessegnon.

“Truly I believe it will be soon that he will be part of the English national team,” said the Fulham manager. “I never spoke to (Gareth) Southgate about him. I spoke to people from the FA before the World Cup.

“Some people think he’s a winger and some think he’s a full-back. He can play perfectly in both positions. His numbers are fantastic as we check how many metres he is running in high intensity. You can be impressed with his physical performance.

“He is clinical in the opposite box and can score goals easy. Somebody says he is not strong enough to be a defender and they are completely wrong. He’s actually seven kilograms bigger than when he started working with us; that’s seven kilograms of muscle on his body. You can detect a big difference.

“I don’t know a winger or a defender who is stronger who can stop him. He must use this power in a legal way, with the experience he will use the body, use more physical contact.

“Close to the goal or far from the goal he can defend perfectly against any player, and still I am talking about an 18-year-old kid. I cannot compare, but I remember myself when I was 18 and I could not play in any position.”

Alfie Mawson faces a late fitness test before Jokanovic selects his starting XI for Saturday’s fixture at Everton, and the fit-again Tim Ream is in contention to replace him should he struggle.

The Serbian is regardless presented with the prospect of again changing his unsettled defence, and he said: “Alfie Mawson has a back problem, and we must assess him.

“(Ream) is in a good way; he played one hour against Millwall (in Tuesday’s 3-1 away victory).”