Jonny Evans recalls how "everyone was shocked" by Man Utd signing Robin van Persie in 2012. 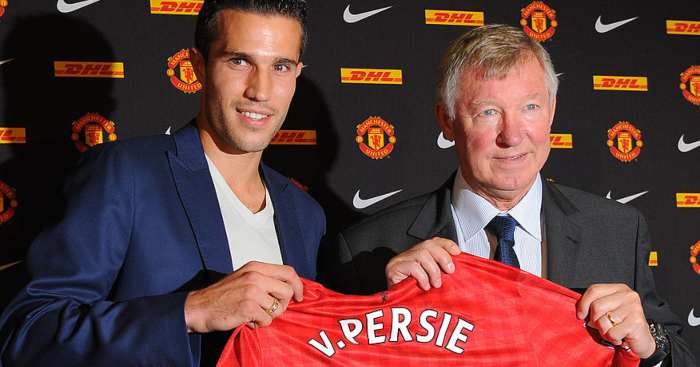 Robin van Persie “was a genius signing” and “the manager’s dream” at Man Utd.

The Dutchman won the Golden Boot and scored the title-clinching goals in a hat-trick against Aston Villa in April 2013.

Ridiculous statistics: Man Utd and the 76 hat-tricks since their last…

Evans, the Leicester centre-half who made 30 appearances for Man Utd that season, says he was the difference that season.

“It was a genius signing, to get someone from one of your rival clubs, where he’d been [for so long] – everyone was shocked,” he told The Guardian.

“He came to Manchester United to win the title, and he was a man on a mission that year. Ferguson loved people who could produce things out of the bag, moments of brilliance, moments of magic, and he had that in abundance.”

Evans picked out one particular game, a 3-2 win over Chelsea in October 2012 in which the Dutchman scored and helped reduce the Blues to ten men.

“We’d been working in training on trying to get Ashley Young running in between the right-back and right centre-back,” Evans said.

“There was a moment where Robin caught everyone out and tried a reverse pass with his right foot, into Ashley’s path. Branislav Ivanovic ended up getting sent off for being the last player.

“To be able to carry out this kind of plan made Robin the manager’s dream. There are other moments that stand out, too. His goal against Arsenal in his first game against them at Old Trafford – he did so with his right, and you think: ‘This guy can score.'”