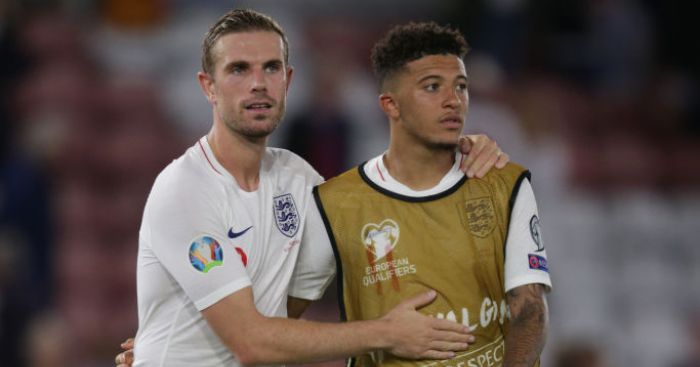 Jordan Henderson has praised “special player” Jadon Sancho after it emerged that Liverpool ‘hold the rope’ to sign him.

Sancho is thought to be the priority transfer target for Manchester United, with Real Madrid also interested.

Liverpool captain Henderson understands why his England teammate is the subject of such rumours.

“A lot of people are speaking about him,” Henderson told The Locker Room.

“He is a top player, a special player, that in training he has got something different and he’s sharp and able to get past players with ease.

“Also he’s got a good head on his shoulders, he loves football, wants to improve, listen and learn so if he just continues on that path the sky’s the limit for him really.

“He just needs to keep working hard and listening to the people around him and keep doing what he’s doing.

“He’s been brilliant for Dortmund and England, so he just needs to carry on.”

Le10Sport claim that ‘neither’ United nor Real ‘finds itself in the best position’ for Sancho, as Liverpool ‘hold the rope’ for his transfer.

The Reds are ‘the best placed team’ to sign the winger and are said to be willing to fund an £80m move if Jurgen Klopp pushes for a deal.

Sancho has been ‘identified’ as a possible replacement for Sadio Mane and Liverpool are not ‘scared by the prospect of an XXL transfer’. They are, in fact, ‘perfectly positioned’ to sign him after deciding a move for Kylian Mbappe would be too expensive.

The Anfield club have also been linked with £110m Wolves pair Ruben Neves and Adama Traore.

Klopp is said to be ‘losing patience’ with midfielder Naby Keita and is eager to ‘freshen up’ his midfield by bringing in Neves for £50m, while Traore ‘remains very much on Klopp’s radar’ as a £60m signing.