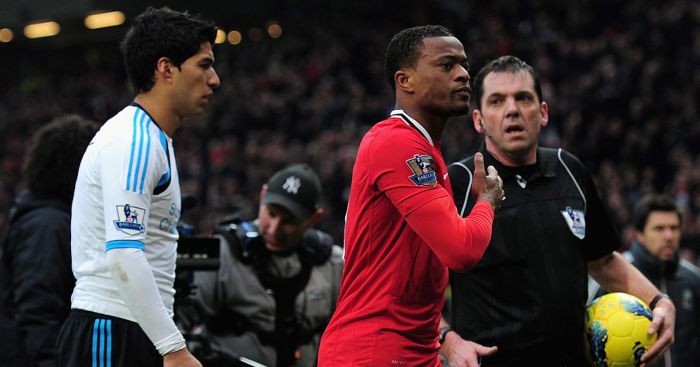 Suarez was given an eight-match ban by the Football Association after being found guilty of misconduct for using insulting words to Manchester United defender Evra, which included a reference to the defender’s colour, at Anfield in October 2011.

Liverpool‘s players responded to the suspension by wearing t-shirts with Suarez’s face on before a Premier League match with Wigan in December 2011 in a show of support for their striker.

However, Henderson now regrets wearing the t-shirts and thinks the club could’ve handled it better in every way.

Speaking to Anton Ferdinand on his BBC documentary Football, Racism and Me, Henderson said: “You learn a lot from experiences. I was a young player at the time so it was something I’d never really experienced before.

“Looking back on it now, I am not sure the club or everybody deal with it in the best way.

“From a player point of view, our mindset was on Luis and how to protect him, but really we didn’t really think about Patrice.

“I think that’s where we got it wrong from top to bottom. If people want to point me out then I’ll take full responsibility as well as a player.

“People will say, ‘That’s a bit late’, but I suppose it’s better late than never.”

Speaking in February, the Reds’ former director of football Damien Comolli had “let football down” over their handling of the incident.

“I regret pretty much everything,” Comolli told The Athletic’s Ornstein and Chapman podcast.

“I regret our attitude, I regret the way we approached it, I regret my reaction at the FA tribunal. I sat throughout the two or three days there. I didn’t react well when they gave the sentence because I didn’t agree at the time.

“It was probably the worst moment of my career because of frustration. We isolated ourselves from the rest of the world and that was the wrong thing to do.

“We should have taken advice from outside, legal advice but also PR advice, from someone who wasn’t caught in the storm, who would say ‘hold on, you should wake up, because the reality outside is not what you are feeling internally.’”

Comolli added: “The fact it was a player from Manchester United almost made things for us a thousand times worse than it should have been.

“We reacted in the worst way because it was Manchester United and the rivalry between the two clubs. I feel that we didn’t look after Luis as we should have. We didn’t give him the defence or the advice he should have got.

“Usually I see the players as my children. It was the first time I felt I had really let a player down. We let the club down, we let football down probably as well because we acted in the wrong way.

“The only excuse I can find, if there is an excuse, is that none of us had ever faced anything like this before and we just didn’t know how to handle it, from the owners down. You should have seen the reaction of the owners towards all this.

“They were more than onside with Luis and wanting to be on Luis’ side. Even at board level where you think these people are removed from the situation and can help, they were caught as emotionally in the storm as much as we were. It was all wrong.”