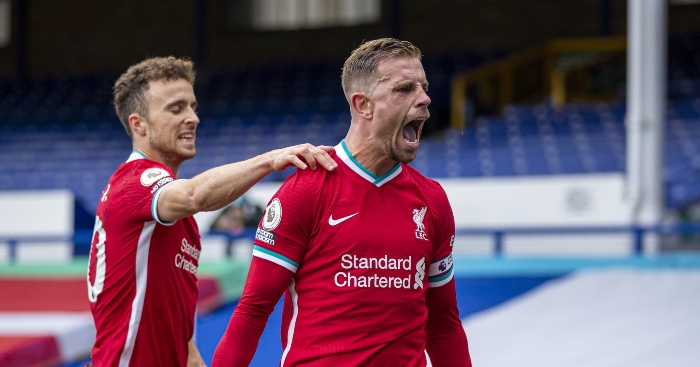 Liverpool captain Jordan Henderson has been named as the first NHS Charities Together ‘Champion’.

The role means Henderson will act as an ambassador for NHS Charities Together, an organisation which raises funds for more than 240 National Health Services charities. It has supported staff, volunteers and patients within the NHS.

Henderson has been involved with the cause since last April when he was instrumental in the #PlayersTogether Covid-19 appeal – an initiative which saw Premier League players donate £4million to the NHS.

He also has family members who work in the NHS.

“It’s a huge honour for me to be asked to do it, to support the NHS, especially at this time,” Henderson told BBC Breakfast.

“If I can help in any way, and support them in any way, I think that’s the least I can do. It means an awful lot to me and my family as well.”

Henderson has huge respect for the NHS and its staff, particularly for the work done during the coronavirus pandemic.

He said: “You don’t need me to tell you how tough it must be for them at this moment in time, not only dealing with the pandemic and Covid but everything else on top of that.

“Because they’re overwhelmed it’s hard for them to do that at the level that maybe they would have done a year ago. Then people get frustrated and there’s a lot for them to deal with.

Jordan Henderson’s cousin Stephanie is one of many NHS staff working through the pandemic.
The #LFC captain talks to #BBCBreakfast after becoming an ambassador for NHS Charities Together ⬇️https://t.co/EXllPswhnE pic.twitter.com/Dzhu2nh4VP

“You never expect something like this to happen. I’ve said it before, you probably only see this in movies.

“The NHS is dealing with a situation that is (happening) now, but it’s also afterwards when things do return to normal and they may suffer mentally – we can’t let that happen because of the work they’ve been doing for everyone and I’m sure a lot of us look up to them. I certainly do.

“It’s an incredible job they’re doing and I don’t think I could do it. Some of the stuff I hear what they’re doing, what they go through, (it) is pretty tough.