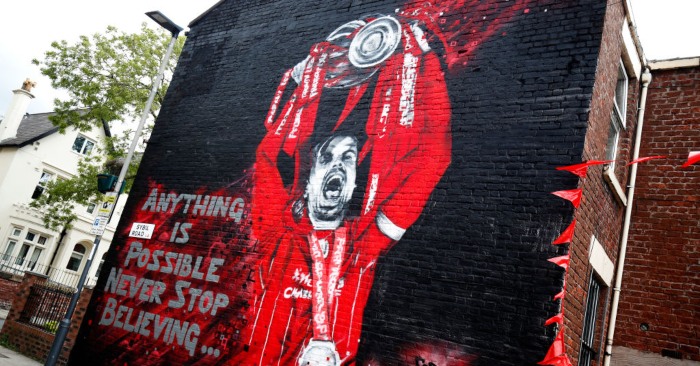 Last week the Football Writers’ Association voted for its Player of the Year. It’s an award that has been in existence since the 1947-48 season, when it was won by Stanley Matthews. This year it was won by Jordan Henderson. Safe to say, this sent many people into a state of apoplexy, and looking through comments, it was commonly agreed that this choice was proof of several things:

They’re biased in favour of Liverpool.

The PFA Player of Year is the award that really matters.

It was a strange but commonplace manic episode. One of those very 2020 situations where the angriest shout that they don’t care what these idiots think, even though their fury strongly suggests otherwise. If writers’ opinions don’t matter, what are you so bothered about them? If it’s not an important award, why worry your man has been ignored?

It illustrated much about where we are today because few seemed aware that the criteria was a mix of football achievements, character and work away from the pitch.

Although I didn’t personally vote for Henderson, it was hardly the most radical or unusual pick. He’s the very vocal captain of a wonderful title-winning side, crucial to their midfield, and he organised the #PlayersTogether donations to NHS charities. Someone did vote for Jonny Evans; that was a left-field pick, but Henderson wasn’t.

Personally, I voted for Trent Alexander-Arnold on the basis that he’d broken club defender assist records, was a thrilling player to watch, hit a mean free-kick and was crucial to Liverpool’s amazing high-performance, league-thrashing season. Away from the game, he seems an intelligent, thoughtful and articulate 21-year-old who also works for Liverpool-based charity An Hour for Others, which helps underprivileged members of the community in lots of different ways. On top of that he’s using the huge £6.4 million boot deal he’s just signed to buy plots of land around the city, which will be turned into community pitches. Brilliant. All of that, I felt, was deserving of acknowledgement. I could just as easily have voted for Henderson or Marcus Rashford but I felt TAA had achieved a wee bit more on the pitch this year, especially for a lad of his age. I didn’t vote for second-placed Kevin De Bruyne not because he isn’t brilliant – he clearly is a genius – but because his whole package wasn’t as compelling. I totally accept others will feel differently. This isn’t a science.

How we feel about any specific footballer is obviously subjective but this seems to have been lost on some people who think statistics prove everything. Thus we saw great screeds of numbers regurgitated to ‘prove’ that De Bruyne was actually the real Player of the Year and if you didn’t agree you were an idiot.

If I know writers that voted for Henderson, I won’t bother to read their articles again. It’s borderline madness to think let alone believe that Henderson is having a better season than De Bruyne.

There are those that seem to hate Henderson with a real passion. Partly this is because he plays for Liverpool and partly because his role is all about industrious work-rate, determination, leadership and physicality. None of which are especially fashionable, are not always measurable by Opta and can’t always be clipped for replaying on Twitter, but are nonetheless fundamental to how his club plays.

Those who appeared insulted that their club’s man wasn’t picked immediately accused writers of being that old, old cliche ‘biased’, which is a bit rich when as fans of a club they are defacto the most one-eyed of all. But that’s very 2020 too. Anyone who doesn’t agree with you is a fool; anyone who does is wise. There is nothing else. Nuance has been killed by tribalism.

Bias is a nonsensical accusation but the paranoid tribalists constantly feed on it. If you don’t enjoy vodka as much as gin, you’re not biased against vodka, are you? You just don’t like it quite as much, though would drink it if there’s nothing else. We just have different preferences and it’s the same with footballers. I’m not quite sure why this is so hard for so many to accept. It isn’t possible to vote for more than one player, you have to make a decision, but that doesn’t mean it rules out appreciation of anyone else. But to some it would appear if you’re electing someone as the best, that means you think everyone else is shit. This polarisation of debate is idiotic but again, very 2020.

The football writers I know, or have met (like commentators) are all incredibly well-informed and most, I would wager, have a far deeper and wider knowledge of the game, of its history, of its players and of the issues around the game, than any fan who is mostly only interested in their own club. That’s not some sort of defensive, exceptionalist standpoint, it is just almost inevitable when they make their living from football and have to be across so many teams, players and issues as part of their job.

As for the PFA award mattering more to players, maybe it does for some, maybe it doesn’t for others. It’s only been in existence since 1973-74, so has a lot less tradition. Given that down the years there are many stories of players not taking the PFA vote seriously, it is at least open to debate that the FWA is a more considered award. But of course, trying to devalue the FWA is just part of the whole childish, immature strop for some.

Deciding who to vote for isn’t a hard science, though perhaps the growth of stat culture has warped some minds to think it is. While it is vaguely shocking that this even needs stating, opinions will always vary about anything that is subjective. Opinions other than our own exist. That’s life. We just have to accept that without hurling abuse at someone for having a different preference to our own.

And if you don’t agree with me, you’re a f*cking idiot, pal.