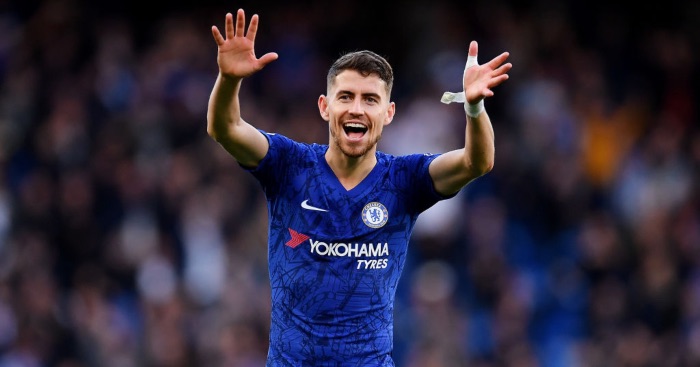 The transformation in Jorginho’s reputation and standing at Chelsea from last season to this has been exceptional. From figure of ridicule and target of misplaced derision, to the wise leader in Frank Lampard’s youthful revolution. But what has actually changed? Is he now a better player? Or has he just been wiped clean of the Sarri-ball tar that brushed both him and his previous manager (presumably from the cigarette end that dangled from his mouth)?

Last season, Jorginho was the sideways-passing defensively liability, the perfect on-pitch representation of a style of football that Chelsea fans grew to hate. If the manager was the composer of Sarri-ball, Jorginho was the conductor, doing his best with what he was given, but unable to extract the right tune from his fellow performers in a way that would prevent a barrage of abuse from the watching ‘aficionados’.

The chants of “f**k Sarri-ball” that marred the second half of last season – only abating for another European triumph in Baku – were aimed just as much at Jorginho as they were at his now poisonous mentor. He and Sarri were one and the same. Like when a widowed father drops his son off at an orphanage in a period drama, many pictured Jorginho running after Sarri’s Rolls Royce as it sped away from Stamford Bridge, the young Italian falling to his knees in horror, then packing his knapsack to walk up the King’s Road – as all roads lead to… Turin. The midfielder’s position seemed untenable at Chelsea, but he would be sure of a place in daddy’s Juventus team.

But Lampard had other ideas. The new Chelsea boss recognised Jorginho’s “brilliant finish to last season” and knew he had the character to be the leader they would require following departure of David Luiz and Eden Hazard, as evidenced by “never hiding” on the pitch. A criticism that can be aimed at Granit Xhaka, someone who – despite this difference – should still take note of his midfield counterpart’s will to ignore the abuse aimed his way, even in his darkest days. Rather than rise to the deplorable castigation with a show of embarrassing petulance, Jorginho got on with his job and was determined to win both his insulters and fellow teammates round – and did.

As early as August 24 – after the 3-2 win over Norwich – Chelsea fans were warming to the Italian playmaker, with Lampard “delighted to hear” the supporters chanting Jorginho’s name. Now ten games into the new Premier League season, that distant feeling of eye-rolling distaste has turned to one of absolute respect and, in some cases, adoration for the 27-year-old.

Lampard said: “What they are seeing now is a player who has a drive, and determination as a team player. I’m certainly seeing that. When the fans see that on the pitch, as they did at Norwich, that’s why they sing his name. I’m delighted with that. I see day-to-day what playing for this club means to him.”

The difference in his statistics this season compared to last are not as stark as the change in his reputation, but they do hint at the more dynamic, risk-taking style of football Chelsea have played under Lampard this season. Jorginho has attempted more long passes (4.1 to 2.8), makes more key passes (1 to 0.8), dribbles more (0.6 to 0.4) and has more shots (0.6 to 0.5), all per game. And the fact that his pass-success percentage has gone down (87.6% to 89.3%), rather than illustrating a dip in performance, shows signs of a more audacious style of football. His high percentage last season was, in the end, used as a statistical stick to beat him with.

It’s no wonder his pass percentage is so high, he doesn’t pass forward, etc etc…

Those leadership qualities noted by Lampard are now more evident, with his rapid learning of the English language both further proof of his commitment to the club and a testament to his intelligence, so obvious on the pitch as well as off it. No longer deemed Sarri’s informer, but the link to the young players, Lampard said: “He crosses the borders, if there are any. It’s easy to come in and stay within your groups and nationalities, and Jorginho doesn’t. He’s a driver, on and off the pitch.”

Jorginho’s role has changed. Without Gonzalo Higuain testing the suspension and David Luiz forgetting to fill up with petrol, Jorginho’s aim is no longer simply to keep the Chelsea car road-worthy; he is doing a fine job of keeping it from spinning out of control as the excitable kids sing “Super Frank” from the backseat.