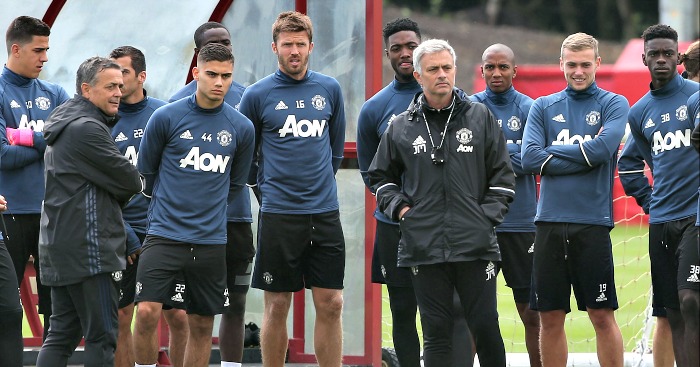 Jose Mourinho has vowed he will give everything to deliver success to Manchester United’s fans after kicking off his reign with a comfortable friendly win over Wigan.

With the Euro 2016 contingent – including the likes of David de Gea, Wayne Rooney, Chris Smalling and Anthony Martial – resting, Mourinho’s Red Devils bow was always likely to be a soft start, though second-half strikes from Will Keane and Andreas Pereira guaranteed a 2-0 win at the DW Stadium.

Everything about the 90 minutes was low key – from Mourinho’s comfort-first leisure wear to his use of 22 different players – but the Portuguese admitted to being taken aback by the level of support he and his side received.

Around 7,000 United fans turned out for the gentle workout, unanimously roaring their support for a manager who is keen to pay them back after three relatively lean years under David Moyes and Louis van Gaal.

“I’m very happy, the result obviously is not the most important thing but it is always important,” he told MUTV.

“Best of all was something that I never had before which was a friendly match, which I could call a training session against opposition, and I never saw something like this…so many supporters.

“They gave permanent support to the team, the manifestation of happiness about a few things they could see in the team, which was absolutely fantastic.

“If it is like this in a friendly match, like I said in my presentation, I will try to give them everything and I’m sure they will continue to give amazing support to the team.”

United’s preparations step up a notch on their forthcoming tour of China, where they face Dortmund, Galatasaray and neighbours Manchester City.

And while Mourinho saw glimpses of encouragement he expects a lot more finesse as he continues his work with the squad.

“I’m happy with some principles of our play – offensively and defensively – that we worked on in training,” he explained.

“I could see them there, but not in a perfect way because conditions is not the best…10 days of training sessions, accumulation of fatigue, no sharpness.

“This takes time but I could see different things; they started thinking football the way I think and that pleased me.

“Everybody played, everybody had a positive performance, so I’m happy.”