Mourinho made unsubtle references to Man Utd's penalty fortune as he hit back at Solskjaer. 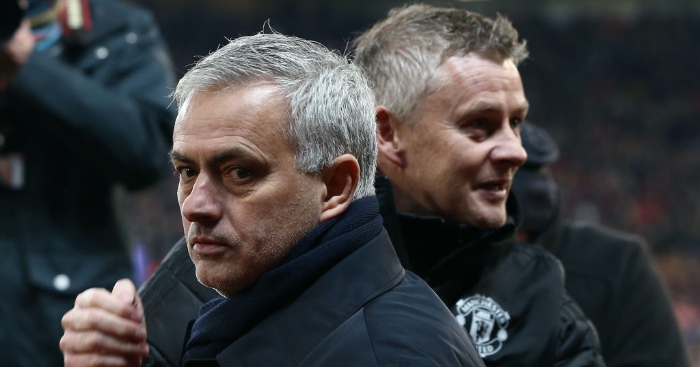 Jose Mourinho hit back at Ole Gunnar Solskjaer after the Manchester United manager made reference to the Spurs boss measuring the goalposts.

Last week, Mourinho had to request goals of the correct size ahead of their Europa League clash against Shkendija after he discovered they were too small before kick-off.

And after Brighton hit the woodwork five times against United on Saturday, Solskjaer joked that his side were lucky Mourinho was not at the Amex ahead of the game.

“We have to be grateful Jose is not here to measure the goalposts,” Solskjaer said in his post-match interview, “it might have been smaller goals!”

Solskjaer’s post-match comments were noted by Mourinho and raised ahead of Tottenham’s clash against Newcastle.

READ MORE: Handball: The straw that breaks VAR camel’s back?

The Portuguese boss highlighted the number of penalties Solskjaer’s side have been awarded with a little joke of his own.

The Red Devils have been awarded a remarkable 15 Premier League penalties since the start of last season.

And Mourinho – with United still on his mind – couldn’t resist digging out his old club again after Newcastle won a late penalty to salvage an underserved draw against Spurs on Sunday.

It was a clear reference to United’s incredible penalty award after the final whistle to secure victory against Brighton.