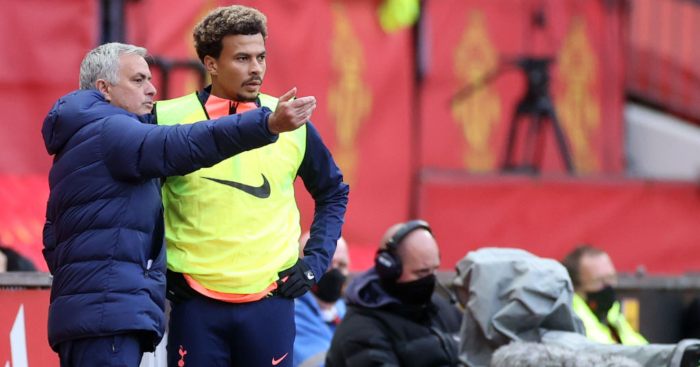 Tottenham boss Jose Mourinho still hasn’t told Dele Alli why he has been axed from his starting line-up this season.

Alli has had a torrid start to the campaign after featuring in just two Premier League matches so far for Spurs.

The England international has played 67 Premier League minutes, while he has been afforded 74 minutes in the Europa League this term.

Alli was the most notable player to be taken off as he failed to make it out for the second half in Spurs’ loss to Royal Antwerp last week.

And the Daily Mail claim that Mourinho has still left Alli ‘in the dark over his demotion to bit-part player’ with the pair ‘still to discuss the reasons behind the Spurs boss’ decision to sideline his midfielder since the start of the season’.

Alli’s questions as to why he wasn’t allowed to leave the club on loan in the summer window are ‘still unanswered’.

The 24-year-old started 21 Premier League matches last campaign for Tottenham, however the Daily Mail insist there has been ‘no fall-out between manager and player but it appears clear that Alli is no longer a key part of Mourinho’s long-term plans’.