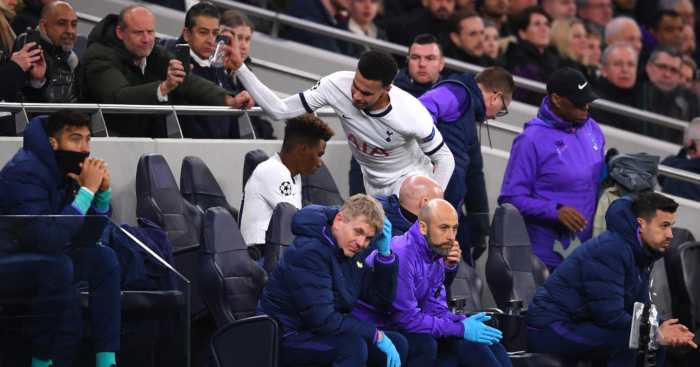 Jose Mourinho insists that Dele Alli was angry at his own performance and not at him after the Tottenham midfielder’s tantrum in their 1-0 loss to RB Leipzig on Wednesday night.

With his side trailing, Mourinho made the decision to bring Gedson Fernandes and Alli off with 26 minutes remaining.

Alli reacted angrily to being subbed by throwing a water bottle and one of his boots in frustration – but Mourinho insisted the England international was angry at himself, not his boss.

“I think he was angry with his performance, not with me,” Mourinho said. “I think he understands why I took him off and our performance improved.”

Mourinho added: “We are speaking about a very difficult situation and if I could, if I could, I would move immediately to the first of July.

“And the first of July with Harry Kane, with (Moussa) Sissoko, with Son, with (Steven) Bergwijn, with Lucas (Moura), with (Erik) Lamela. I would love to be on the first of July, but I am not.

“We are the 19th (of February), so we have to fight until the end. I feel really proud of the boys. I arrived here 12 points behind the fourth (team). We are one point behind the fourth and we are going to fight.

“But as I was saying in some television (interviews), the Chelsea players were watching this game on TV, with nice sparkling water, with lemons and biscuits, enjoying the game and we play Saturday at 12 o’clock.