Mourinho has praised his two in-form forwards after they proved to be the difference against Burnley. 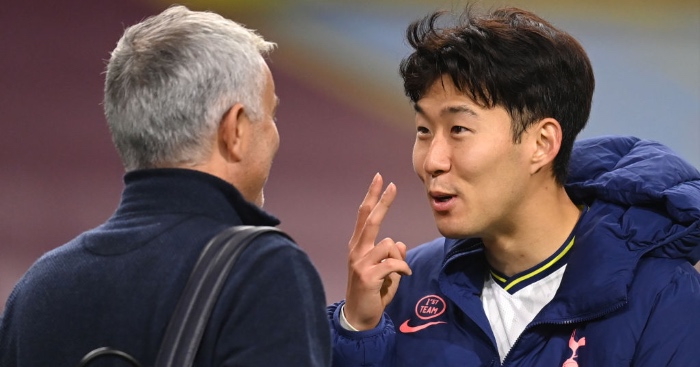 Jose Mourinho has praised ‘great players’ and ‘close friends’ Harry Kane and Heung-Min Son, after the pair linked up for the only goal against Burnley.

Tottenham were below par in the first half and looked like they would struggle to score at Turf Moor.

Striker Ashley Barnes had a goal ruled out after he was deemed to be offside.

FEATURE: Rashford is driving football as a vehicle for societal change

Burnley continued to put them under pressure in the second half and had the better chances to score.

But Kane and Son saved their side once again by linking up for the 76th-minute goal.

Erik Lamela whipped in a corner which was headed on by club captain Kane.

His South Korean teammate was in the perfect position to head the ball into the back of the net.

The goal showed perfectly why the two players are some of the best in the Premier League at the moment.

Speaking after the match, Mourinho told reporters: “It is an understanding that comes from Mauricio [Pochettino’s] time. I don’t want all the credit myself, let’s share with Mauricio. They played together for a long time, probably a different way because Harry is not always a nine now.

“What pleases me more about them both is that they are two top players but [also] close friends, no jealousy, they both play for the team.

The result could prove to be an important one for Spurs in their pursuit of Champions League football.

It demonstrates the team’s ability to pick up three points even when they aren’t playing their best.

Burnley’s ground is arguably one of the hardest to win at in the division, so Mourinho will be pleased with the result.

Their next fixture is against Royal Antwerp in Group J of the Europa League.