Jose Mourinho told Harry Kane that he wants to help make him a global superstar in an early meeting... 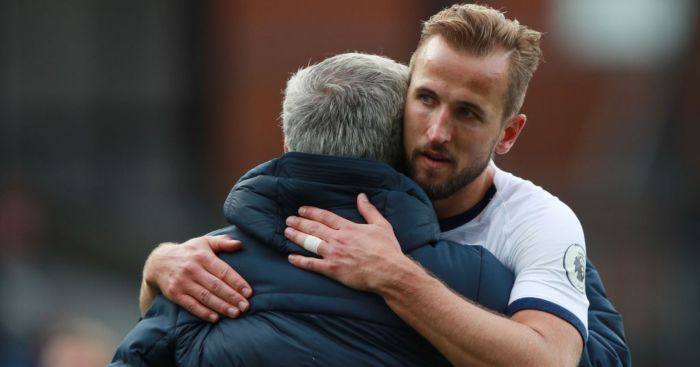 Jose Mourinho told Harry Kane that he wants to help make him a global superstar in an early meeting between the two following the Portuguese’s appointment at Spurs.

Mourinho called England skipper Kane into his office in his third day in the job after he replaced Mauricio Pochettino in November.

A scene in Amazon Prime Video’s upcoming documentary All or Nothing – which airs next Monday – shows Mourinho sitting down with his star striker, who was a close confidant of the sacked Pochettino, and telling him how they could be good for each other.

OPINION: Mourinho has set Spurs back a decade…it may just suit them

“I saw you training yesterday and I have no doubts that you are a leader. That is my feeling. The world looks to English football with an incredible respect but they still think that the movie stars of football belong to other places.

“We have to build also your status in that direction. My profile, I am little bit like that as a coach. My dimension is universal and by being with me I think I can help you to… (makes explosion gesture).

“What I don’t accept, because it is my nature, is to be here and win nothing. But I feel that we can because of you.

“You have better players than I had at Manchester United. The club has a lot (of potential) to explode.”

The documentary begins with Spurs’ poor start to the 2019-20 campaign, leading to Pochettino’s sacking, though the majority of it was glossed over.

Chairman Daniel Levy, who had a close relationship with the Argentinian, did open up about the decision to replace his manager.

“A lot of heartache is the honest answer,” he said when asked how he felt. “It’s never easy when you have to ask someone to leave the club. When you’ve been working with someone for five and a half years, it’s difficult.

“It’s the most emotional decision I’ve ever had to make. It was more than just an employer-employee relationship. We went away together, we had a lot of fond times outside the club. I’m sure after a little while we’ll continue doing that.

“At the moment things are a little raw, which is understandable. Mixed emotions. It’s not a nice experience for either of us.

“Everyone is going to have different opinions. That fact is that the results weren’t where they needed to be.

“We have to do what we feel is right for the club and only time will tell if it’s the right decision.”

The cameras were following the club for the entire season and were there to witness some dramatic moments.

Mourinho did not let them affect his management style though as he was happy to give candid team-talks, which made fascinating viewing.

In one of his early speeches to his team he accused them of being too nice.

“We have to win. I wouldn’t come here if you were not as good as you were. No chance.”