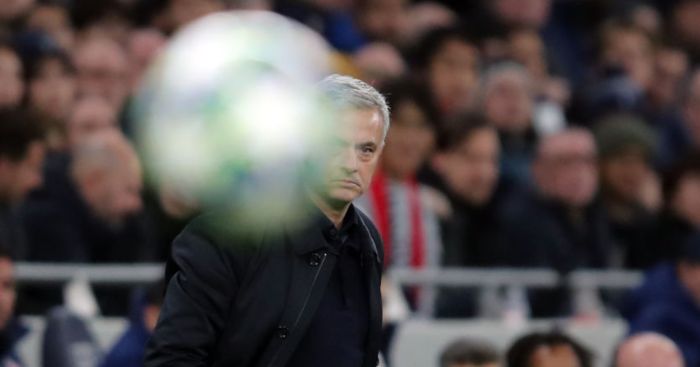 Send your thoughts to theeditor@football365.com, your votes here and your nudes elsewhere.

Lol, made me chuckle that. Talk about casting a rod. I aint biting, though I’m sure many will. Looking forward to the afternoon backlash.
Ryan, Liverpool

And there it is. Right at the end of your reasonably measured summary of what you’ve written about Mourinho you show you hand. “We obviously all hate him”. We noticed.

Steve, Los Angeles wrote a really good piece there. The quality of your journalism is normally excellent, you are a shining island in a sea of mediocrity. But on Mourinho you’re the pits, a shrill pile of self righteous rubbish.

And the thing that was really bothering me was your simple argument was flawed. It boiled down to this – Pochettino was good. Mourinho was evil. Poch was a long term builder. Jose a short term expensive trophy chaser. Poch believed in the glory of the chase. Jose won at all costs, however dark.

But here’s the thing. Poch doesn’t believe in the tag you gave him. How could he, when he lost the Champions League final he went to pieces…moved to Madrid, wouldn’t speak to Levy – failing to win broke him. He didn’t believe in glory over winning. He wanted it so bad and when it didn’t happen it broke him. That’s human and very understandable but stop holding him up as the poster boy for trophies don’t matter. Not winning killed him.

Mourinho moans
Good God, some of these emails slating F365 are nonsense and just annoying. Here’s a quick quiz for you; How do you know if you’re a Mourinho apologist? You get halfway through your emotive defence of his cult of the personality self before you loudly shout at everyone you’re not.

This idea that Jose, a millionaire who gets to manage football teams should be able to walk back into one of the most high profile and public arenas in the world, the Premier League (no comment on quality etc.) and be given a mysterious blank slate is just crazy. Why? Why does a man who has made some questionable, if not abjectly immoral, decisions get to have them forgotten in the short term until we’ve decided he will do it again?

It’s such a bizarre mindset that goes behind Premier League managers that until we’ve seen Mourinho abuse another staff member in front of millions of people watching, or until he pokes a fellow professional in the eye, or until it looks like he is bullying one of his players bordering on constructive dismissal to force them out, we can’t have an opinion on him.

Why does someone putting on a different coloured club training top mean we have to suspend our previous opinions of him until he’s done it again? Well here’s a newsflash, the initials on that training top are the same, as they always have been and that’s what’s important.

In my opinion, JM is a tosser until proven otherwise. He was a miserable git for a long time in the Prem, and worse elsewhere, but because he’s told us he’s gone away for less than a year not needing to find a job in that time to sustain himself, watched loads of football and created tactical systems while attending high-profile football matches as a pundit (something that most of us on this site would see as an opportunity of a lifetime, not some self-imposed wretched exile) I’m supposed to think ‘wow, what a measured and mature reaction of a man. I will suspend my intense dislike of his behaviour until he gets another strike. Well I guess he’s had more than 3, but he’s at Spurs now! So wait until he’s had a half season, or whole season, or wait until his third season, when his fans say I can then make a judgement on him. Oh he’s flamed out and been sacked by Spurs? Good I can make a judgement on him no- He’s gone to West Ham? Ah bugger, guess I’ll have to wait another 3 years before I’m allowed to have an opinion on him.”

Mourinho is like a cheap Ikea table, looks great on the box and in the shop, seems ‘good value’ when you get it, collapses after a short while, which would be fine if everything on the table didn’t smash when it folded. Then your house sets on fire. And you have to pay the council to collect the broken table.

And here’s another thing. Constantly using the term ‘narrative’ to refer to a single media site reporting and commenting on several things about an incident or person that doesn’t match your view is childish and doesn’t make a point. It’s becoming more common in the mailbox to see people disagree with a point by just scrunching their fists and claiming narrative (also straw man, which is used repeatedly and without a point) because they have heard a contradictory opinion more than once.

And my last point is that while Mourinho was proved right in his decision to replace Dier so quickly, why are people not pointing out the foolishness of starting him? He turns like an oil tanker, is a poor passer of the ball and has been left out of the team consistently for a reason. If Mourinho takes the credit for replacing him (despite his butter wouldn’t melt ‘it’s not about me’ presser) then we should be asking what it was apart from his historic fatuation that made him think playing Dier was a good idea, maybe he trains real hard…
DBM (Don’t @ me) MCFC

I’m sick of seeing/reading about mourinho and he’s only been back a week! Can we just ignore him? He’ll be gone again in 2-3 years.

Strevs, Afc, Canada
(My baby woke up so I’m mailboxing at 4am)

Dejan vu
Just for once his performance justified his self-promotion on Twitter, when he was on it. It’s a bit sad our lunatic majority on Twitter forced him off it IIRC. I do wonder if Der KloppMeister likes his slightly more emotional and reckless style versus VVD’s effortless cool. They dovetailed quite nicely last night, for once.

Congrats on getting hitched Winty – probably not a recent development but belated congrats all the same. What I like about Sarah is that she isn’t a professional Yorkeshire[wo]man in the guise of, say, Boycott. I’ve never quite understood why men from what appears to be a rather depressed, miserly and misogynistic county seem to take such pride rather than embarrassment in being from Yorkshire. Thankfully Sarah doesn’t ram it down our throats every second like Peter Kay and his unfunny cronies. Or that awful guy from that crap broadband provider….

Anyway, probably Dejan’s finest performance since that night against Dortmund. Whisper it quietly but he has put in a number of decent shifts since Matip’s most recent injury. Still prone to the odd brainfart but dare I say it… #Steady.

[So expect him to gift a goal against the Seagulls…]
Gregory Whitehead, LFC

After the Liverpool game last night I’ve found myself speaking almost wholly in clichés. So I thought I’d share my basic football thoughts with the mailbox. Be warned they are straight from the 80’s.

1) Bizarrely, Napoli have become our ‘bogey team’ – one (touch and go) win in 4 games over two seasons. Compare that with our record against anyone else?! I have no explanation. It’s voodoo or something.

2) We waited too long to make the changes – Alexander-Arnold could really have done with a few more minutes.

3) The team selection was off – Henderson, Milner and Fabinho is a bit too basic. Personally would have started Oxlade-Chamberlain – especially as Salah looks a bit off at the moment.

Not complaining at all. They’re a good side, Liverpool are having an incredible season, Jürgen is a genius (another one there).

These are my clichés. Sometimes it’s all we can muster. On to Brighton.
Marc (London)

No pushovers
In the last couple of games I’ve noticed that certain Liverpool players have developed a tendency to completely unnecessarily and dangerously push opponents off the pitch and down the slope surrounding the playing area. At least the Champions League referee quite rightly booked the player last night whereas Michael Oliver really didn’t seem to see it as a problem in the Premier League…
Tim Royall GFC

Defending our attack in defence of our defence
Joe Leicester from the mailbox earlier needs to read my original mail again; I quite clearly mention we have conceded 15 and use that as the basis for rate conceded per game. He might also want to check his maths, at the current rate we would concede 44 over 38 games. Not sure how you got to 52 Joe, unless they are extending the season to 45 games. We may need those extra 7 games to get enough points to break into the top 6 to be fair.

As regards Doug’s mail about the 4 seasons prior to last season and our goals conceded, let’s take each in turn.

2017/18: Mou’s second season. 2nd best defence in league. 5th best attack, 6th in chances created. Finished 2nd. Again, the team was set up to sit off, not press and get back in numbers to protect the defence. POTS – David De Gea.

So you can see that actually, Dave saved quite a lot and/or the balance of our team was set up to protect a soft defence. Also a lot of the defenders that we had/have are injury prone (Jones, Bailly, Shaw, Rojo). There is a reason why Mourinho wanted to sign at least one defender in his last season, maybe he does know a thing or two about managing a football team (shame on you F365!). Ultimately, protecting our defence was hindering our attack.

What about this season I hear you cry. Well so far we have the 5th best defence, 7th best attack and are 5th in big chances created. As I said in my email, the attack still needs work but I don’t think you could suggest we have been set up to drop deep and defend off the ball, or retain and recycle possession on it. Both of our CM’s get up and down the pitch, our full backs generally push up and we are working on pressing high. This leave the defence exposed and so they have to be good defenders, and I believe both Maguire and AWB are upgrades on what we had.
Garey (cue both getting injured now) Vance, MUFC

When did your addiction start?
Seb’s piece on ChampMan got me reminiscing of 1994, when my cousin handed me 2 floppy disks. For a 15 year old boy who ate, walked, slept, breathed football it was a chance to live a dream. To manage the expectations of the fans of your beloved team.

I’d love to know how others got introduced to the game. I’m sure there would be a few interesting ones.
Taz