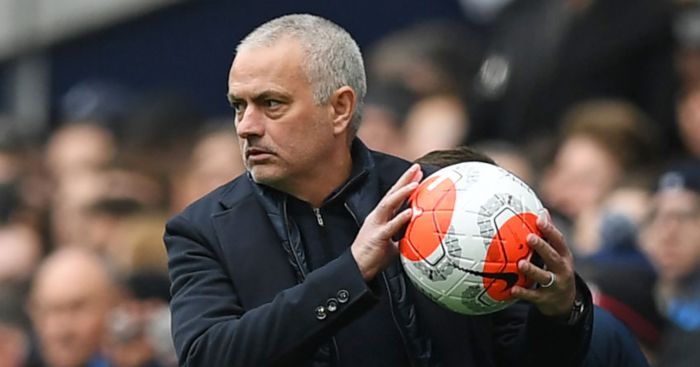 So now it’s near, the final curtain etc. One indisputable piece of credit you have to give Jose Mourinho is that he absolutely did it his way. The textbook chapters, from ‘how to get sacked’ to ‘how to defend your players’ to ‘how to throw your players under the bus’, to ‘how to win the Champions League with a team that has no business winning it’ – that’s his personally-authored textbook.

But all of those who watch football as anything more than a distraction will know there’s nowhere left to go with his way. It seems he’s lost a battle with something inside himself, and now can only speak in registers of disdain, dissatisfaction and disillusion, growing ever more petty and back-handed. The last time he oversaw a team with anything approaching the blunt-force trauma he used to wield was the Chelsea title-winning team the second time around. That was five years ago.

Chelsea fans should be touched he seemed to have a last jolt of petrol left in the tank for them, one last spark to go back there and show them what they’d been missing. Let us not embarrass ourselves by pretending that anything since has honestly been much of anything. When the inevitable Spurs pay-off will come, who can say; but you absolutely know it’s in the post. Into White Hart Lane will sweep Julian Nagelsmann and Spurs can start thinking of the future again.

There might be one last big job for Jose, if you class managing PSG as a big job (and if you do, I’ve got some prime Dubai waterfront residential-complexes I’d like to sell you). Or better yet, managing Portugal, though one can never quite picture the intermittent nature of that role as a good fit for a man who needs – and in the past actually seemed to want – the daily spotlight upon him. Now it looks like it makes him as crabby as anything else, despite his need.

No, we’re at the end. There is, as ever, one big job he’ll never get, and I hope it doesn’t still gnaw at him. But at the same time, it would be pretty hard to look at that guy, that baleful, dismissive, dour, pointlessly pugnacious guy, and ever say ‘nothing is gnawing at him’.

So then I guess you’d have to wonder what will remain of Mourinho? To focus on the good first: one could never say again – and Nagelsmann himself is probably grateful for this – that the absence of a playing career, and in its place a focus on an intellectual approach to football, is any barrier to success as a manager. Mourinho has ensured a path. Managers now give detailed presentations about what they can bring to a club – AVB did it, Nagelsmann did it, even Sam Allardyce did it for England, although, y’know, clearly he had other things on his mind, too. Somewhere on all of those presentations are Mourinho’s fingerprints, leading back to the days when he used to astonish Bobby Robson by coming back with scouting reports detailing walking postures of players and their shoe sizes.

Endless players, from Zlatan down, have spoken of how he prepared you to anticipate everything a particular player might do. I saw Gary Neville talk recently about how, playing for Man Utd against Chelsea in their 2005 heyday, he and the team found it absolutely impossible to play. Everywhere they went, a player waited for them, every move they attempted was stifled and snuffed out. That wasn’t by a chance; it requires a full comprehension, and then a full transmission to the players, of what United might try.

Mourinho was a pioneer in ensuring that things that happened on a football pitch were not an accident.

Boring though, that stuff. It speaks to me, more than anything, of an agitation with losing, a desperation to never do it. It approaches the prospect of chaos in football matches like your company’s best accountant approaches the prospect of the office Christmas party. From Chelsea’s title-winning years I can’t even conjure images, just a vibe of battering supremacy, whereas my mind floods with clips if I think of Arsenal’s title successes, of United’s Roon-Ron-Tev trio, Manchester City’s recent efforts, even Leicester City.

Chelsea won because they had to win, and did so.

So from his greatest strength (the ability to not lose) immediately to his greatness weakness – the evident belief that winning was a triumphant form of not-losing. The greatest credit that should be given to Mourinho from the heyday of his career was his ability, by the sheer magnetism of his personality, those rakish looks, that wonderful, chilly/snide habit, to convince you that you were watching one of the great winners, not the greatest not-loser.

On Tottenham and Jose Mourinho’s expectation management. It’s not influencing how anybody thinks, just creating an unhelpful link back to his past. @F365.https://t.co/2pYBT0IfLM

He was, it is true, “not one from the bottle”. Jurgen Klopp loves the excitement of creating a winning football team; Sir Alex Ferguson lived for nothing else; Arsene Wenger was ultimately too soft for the quest but it clearly pushed his buttons; Pep Guardiola is the ultimate control freak who loves winning. All of them, from Klopp’s hurling everyone up the pitch to press, to Guardiola wanting to play one centre-back, to Fergie imploring his players to simply “do something to excite me”, to Wenger wanting no-one in his midfield but beautiful passers, have room in their characters for winning’s essential element: recklessness. You don’t win by safely moving your pieces from point A to point B.

But recklessness cannot be interrogated and subdued by endless preparatory analysis. It cannot be ‘part of the plan’. And Mourinho’s football had to always be part of the plan. There’s a dirty little secret at the heart of his teams, which is that there’s not much to them. Take away the one-off greats, the Decos, Drogbas, Sneijders, Lampards, and what are they? What do you recall? I actually don’t seek to reduce, whatsoever, the achievement of bringing an entirely new approach to elite football, whereby you are the best by being the most disciplined in your reaction to other teams.

Writers with far greater tactical knowledge will be able to tell you exactly what about Mourinho’s systemic approach has already been discarded as a relic of history, that strange time when the most famous and powerful manager in Europe was one who didn’t particularly enjoy winning for its own excitable beauty, but rather enjoyed it like a snake squeezing a vole. But I can tell you how it looks from my perspective – now that between them Klopp, Mauricio Pochettino and Guardiola have reignited our senses of what successful football can be, at least on English shores – and that it now seems nigh-on impossible to imagine any manager speaking of Mourinho’s wider approach to football as one they seek to emulate, even admire.

Yes, the grasp of the details. Yes, the vast trophy haul, though you sense they’d see that now as objectively admirable, like Ferraris lined up outside the Emir of Qatar’s home. But witness the changing of the guard, even as we speak. When asked about beating his former manager last weekend, Nuno Espirito Santo called it “nothing special”. This may have been the understandable reaction to Mourinho jovially labeling him “a better manager than he was a player”, but come on: if it was 2010, can you imagine any manager breezily describing a comeback victory over a Mourinho team at home as “nothing special”?

He’s grown old. When you’re young and rakish, and endlessly visually distracting, you can conceal any number of frailties. You can convince people they aren’t seeing what they’re seeing – that they’re instead seeing pomp and magisterial dominance. When you’re old, joyless, crabby in every utterance, your frailties become a visible, juicy target.

So to me, because his football is shortly to be forgotten, an unexpected avenue in the narrative arc of football’s 21st century, to be dismissed by all the young managers who have no desire to be the best at the not-losing game, his true legacy lies in something else, and it will be a lot harder to escape this one. You can boil it down into a single phrase: Press (questioning new manager): Which One are you going to be?

Far more instructive, looking for the real legacy, to consider the strange spell that he spun on the press, and how – partly to save their own blushes, and make quite dim men seem less gullible, to fill up column inches, and spin soap operas from not much – they re-cast the role of managers as following the Mourinho archetype of ‘mind-gamer in chief’. It is teeth-grindingly inane, the things we are now expected to believe constitute ‘mind games’. Fergie pushing Kevin Keegan off his stable mental perch – that’s a proper one. But after Mourinho, any utterance of disdain for a fellow manager, any opinion voiced on whether his dog might be getting deported, the articulation of his already-toxic dislike for Wenger – all of these and more were transcribed by a salivating press, eager to portray their own interpretations of events as central to the action, as the musings of a modern-day Metternich, always speaking covertly, to shield his players, to draw fire away from the camp, to focus the white heat of pressure elsewhere, to tzxhsjhdli;ha…apologies, dozed off for a moment.

It might be that the more accurate way to see Mourinho, to put him and in his legacy in proper context, is not in fact in any football sense at all. I enjoyed that Inter team he won the Champions League with, feel as warmly disposed to the regularly boring Porto side’s achievements as it’s possible to be (cos I love Deco), feel absolutely zip for what he did with Real Madrid and feel the same appreciation for his Chelsea exploits as someone getting motion sickness might appreciate how fast the car is going. That’s his football – over-funded, vaguely unappealing, and I’m sure dementedly committed behind the scenes to ensuring it achieved what he wanted, which is to be seen as a winner without having to be one.

Where he really belongs, legacy-wise, is as a cultural touch-point in England at the midway point of the noughties, as death was arriving to the mighty press. Anyone who works for the Sun, the Mirror, the Mail etc, now, is principally a joke. That’s their first role. They belong to an industry and a way of working that was sordid, naff and half-baked in equal parts – and that was before we learnt about their information-gathering practices, and also before the holes in their sales figures switched from ‘torn a new one’ to ‘Titanic meet Iceberg’. In 2004-6, though, they still had something, the internet had relatively little, and interacting with Mourinho was perhaps the last true sense they had of dictating the direction of football. Mourinho, at a time when his want and need for the spotlight appeared very happy bedfellows, played ball.

It’s a minor thing, but still salient. Everything the press wants you to think about how managers are and operate now has Mourinho as its lodestar. Shortly they will be gone and so will he. And I guess then we get our final perspective on who was actually the special one and who was just an inflated figment of our shared cultural imagination, from a particular time and a place.