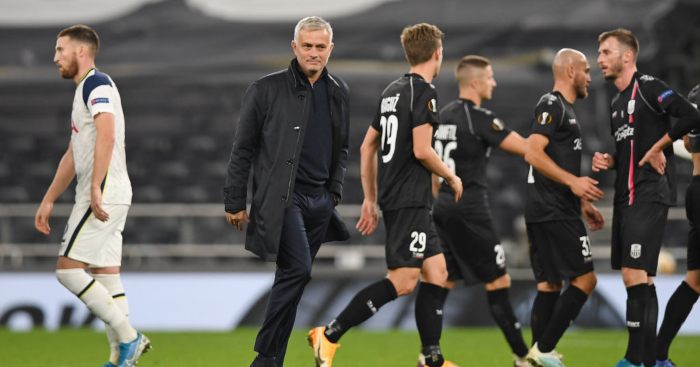 Jose Mourinho has revealed that he and the Spurs team were referring to Pierre-Emile Hojbjerg as ‘Zidane’ at half-time in their 3-0 win over LASK on Thursday night.

The Denmark international had to play through the pain barrier on Thursday when he clashed heads with a LASK player on 21 minutes and had to receive stitches.

Hojbjerg managed to contnue until the 62nd minute and even managed to perform a double pirouette before the half-time interval.

FEATURE: Harry Kane leads Europe for most assists this season…

Real Madrid legend Zinedine Zidane was known for his technical ability on the ball and Hojbjerg was affectionately nicknamed ‘Zidane’ at half-time.

Mourinho told reporters: “We were having a laugh at half-time and we were all calling him Zidane. Very nice but don’t do it again Pierre!

“He’s a very good player, a good leader and a captain without the armband.”

Meanwhile, Carlos Vinicius was handed his debut in the Europa League Group J game against LASK and made a good impact, creating two goals for Spurs in a 3-0 win in north London.

He set up goals in either half for Lucas Moura and Son Heung-min and would have opened his account had Andres Andrade not turned a Gareth Bale cross into his own goal.

Spurs boss Mourinho was enthused by his debut and says he can be more than just a deputy to Harry Kane.

“He played well but he can do better,” Mourinho said. “It is a bit of a shame still, it is not easy not to speak English so the adaption to the group, in spite of having amazing guys that try to make him feel well, is not easy.

“He is still in a learning process, Vinicius can be much more than this. But first match I am really happy, the only thing that was missing was a goal.

“But we can see he is much more than… he is not selfish, he is a good target man, he can even play with Harry Kane when his good period arrives.

“He can play with Harry and not just be the guy to cover him. I am very happy and the feelings over everyone in the squad are good towards him.”