Home All The News Mourinho: Some Spurs players ‘really in trouble’

Jose Mourinho had a whole host of reasons why Spurs struggled on Sunday. 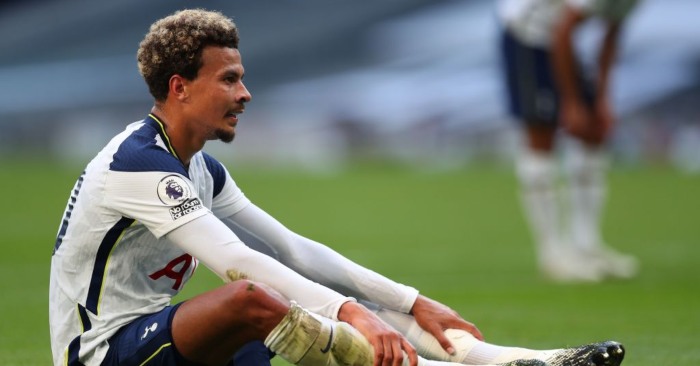 Jose Mourinho believes his side’s wretched start to the Premier League season was down to a pre-season that was disrupted by players getting coronavirus and the international fixtures and also had a dig at the officiating.

Spurs went down 1-0 to Dominic Calvert-Lewin’s second-half goal in north London (which came from a free-kick Mourinho said was taken in the wrong place) and it was a limp display.

Mourinho has only had a few sessions with his whole team as several unnamed players tested positive for Covid-19, more had to quarantine as a result of coming into contact and then a host of his squad travelled to play with their national teams.

READ MORE: James shows Tottenham what they are missing with Dele Alli

The Portuguese said he “did not like his team” and they lacked intensity, but did give them mitigation in the shape of poor preparation.

“Harry Kane trained with us once,” he said. “Moussa Sissoko, a couple and I am not going player by player. For different reasons many of our players didn’t have proper pre-seasons.

“We had cases of positive Covid, we have the right not to say which players, but we had players, we had other players in quarantine due to proximity with positive players.

“We had a player in quarantine because he was on holiday in a country which the government quarantined, we had national teams where many of them went to their team so it was a difficult pre-season.

“I couldn’t expect them to be sharp, intense, agile. But I was expecting much more individually and collectively.

“It disappoints me, and that is where I have now to work. The players who didn’t have pre-season, we don’t have now the possibility to give them a pre-season but we have a lot of matches now to play consecutively and we have to use these matches, not just to win them and the knockout ones are obviously decisive ones with everything decided in 120 minutes or even penalties, and try to use this to improve the form of some players because some of them were really in trouble.”

Spurs had some decent chances in the first half but were complete no-shows after the break and Calvert-Lewin’s 55th-minute header was enough for Everton.

It came from Lucas Digne’s free-kick, but Mourinho was not happy with where the delivery was taken from.

“I didn’t like my team, but I didn’t like that so many referees on the pitch and on the touchline and in front of the screen allow a free-kick to be taken five or six metres in front to allow a completely different angle of delivery.

“I can complain now because I was complaining before the goal. But I didn’t like my team.”

For Everton, this was a statement of intent that this could finally be the year they crack the top six after a number of false dawns.

Carlo Ancelotti has been backed in the summer and all three signings – Allan, Abdoulaye Doucoure and James Rodriguez – impressed in a win that could have been far more handsome.

The Italian is confident his side can challenge for a European spot this season.

“I am pleased we started the season well and we showed we can compete which is the most important message to take. We can compete with everyone if the spirit is good, if the attitude is good and the players showed this.

“We said that our target is to try and reach European position, we started well. The problem we had last season a lot of the time we were up and down the first game was good, we have to see for the second and third. I have a lot of confidence, I had some before this game and now I have more but we have to be focused.”