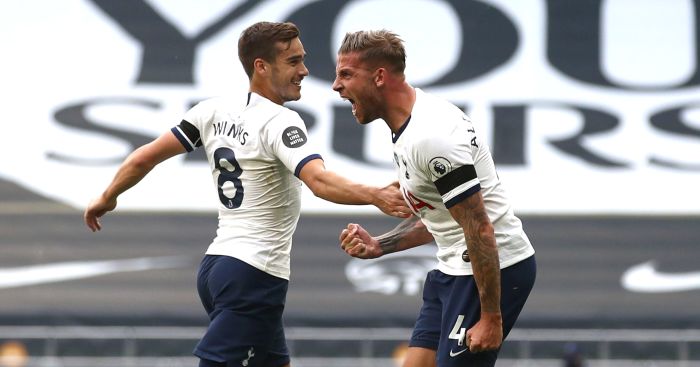 When Sheffield United nonchalantly passed their way around Tottenham’s cardboard cut-out defence for a third time at Bramall Lane it was easy to see Spurs’ already shambolic season unravelling completely.

Ten days, four games and 10 points later, we probably have to give them a bit of credit. Ten points in 10 days is a decent effort in any circumstances; from where Spurs were physically, technically and mentally in Sheffield, it’s pretty remarkable.

The Everton and Bournemouth games were truly horrific to watch. They also secured four points and two clean sheets. The Arsenal and Newcastle games were significantly better, and if that sounds a bit like saying the bread is the better bit of a sh*t sandwich it’s still something.

A couple of things have changed. There has undoubtedly been more fight in the team since the Bramall Lane Unpleasantness. Sometimes it can take that kind of humiliation to truly open people’s eyes about just how bad things are. Jose Mourinho clearly went a bit far when describing the on-field barney between Son Heung-Min and Hugo Lloris in the next game against Everton as “beautiful”, but it also showed there was still…something. Some trace of flickering belly fire.

What will perhaps please Mourinho most of all is that against both Arsenal and Newcastle, Spurs were able to respond to setbacks. Perhaps the most alarming element of the Sheffield United defeat was the way Spurs just seemed to shut down after the admittedly understandable disappointment of the daftest victim of the daft handball law yet. It was a setback with 60 minutes of football still to play, not 60 seconds. It did not need to be terminal and actually could have been a catalyst. Against Bournemouth, the non-award of an early penalty seemed to have a similar disheartening effect.

It’s baby steps, and against Arsenal especially came with significant opposition assistance, but the speed with which Spurs equalised in the north London derby and regained their lead at Newcastle has to be encouraging.

The mentality has certainly improved, even if any uptick in the actual quality of football remains pretty negligible.

Another more obvious yet surely significant change has been the return of Toby Alderweireld to the starting XI. As highly rated as he is and was, he remains underappreciated.

Maybe only Mourinho will really know why he chose to start the mini-season with a central defensive partnership of Eric Dier and Davinson Sanchez, but the return of Alderweireld has coincided with an improved defensive shape and cohesion – it could, admittedly, hardly have been worse – and that is no coincidence. And also an unintended but handy consequence of Dier’s memorable trip into the stands in the olden days when nobody had even heard of social distancing.

Of course, Spurs’ improvement cannot be entirely put down to Alderweireld’s return, but he has a career-long habit of making defences better.

Worth repeating: Toby Alderweireld arrived, and Tottenham Actual Hotspur were instantly the best defenders in the Premier League. He’s not a central defender, he’s an actual wizard.

Alderweireld is no longer as good a player as he was in those first few imperious years in the Premier League. But he is still, demonstrably, the best centre-back available to Mourinho right now and likely to remain so.

Spurs, and Mourinho, are pretty lucky to have Alderweireld to call on. Maybe that’s just another example of the Belgian not quite being as appreciated as he should be. He was available for just £20m before his old Tottenham contract expired and he would still improve most teams and pretty much any squad.

He is still only 31 and Spurs now have him under contract until 2023. Despite everything, there is still life in this Tottenham squad.