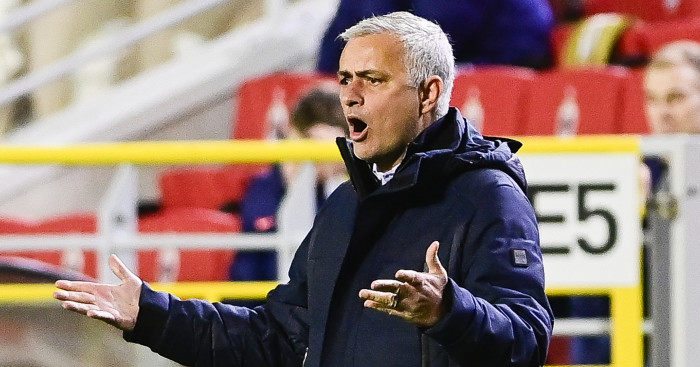 Jose Mourinho has hinted he has lost patience with some of his players after he was forced to make four half-time changes in Tottenham’s 1-0 Europa League loss to Royal Antwerp.

Mourinho fielded a much-changed side in Belgium and they were woeful in the first half, going behind to Lior Refaelov’s 29th-minute strike.

The Portuguese had seen enough and hauled four players off at half-time, but it made little difference as Antwerp recorded a famous win.

Dele Alli was the most notable player to be taken off as he failed to make it out for the second half for the second time in three starts this season, with Giovani Lo Celso, Steven Bergwijn and Carlos Vinicius also benched.

Although Mourinho, who took ultimate responsibility for making nine changes, did not name check the 24-year-old, it is difficult to believe he was not talking about Alli.

“Look, you know what’s our best team,” he said. “You know the same thing that I know, that everybody knows. But I always like to think the players deserve an opportunity.

“We have a big squad with lots of good players. It’s my responsibility to give them opportunities to play and catch the chance with both hands and be in conditions to ask for more.

“And tonight my future choices are going to be very easy. But again, there’s only one responsible. Not the players. It’s my responsibility because it’s my decision to play.

“I don’t want to analyse individuals. I don’t like to do that, especially with you (the media).

“I think it is fair to say that players with bad performances they influence the team, but also the team influences individual performances.

“I would like to make 11 changes (at half-time). I didn’t make five because I was afraid of a long 45 minutes without any changes to make.

“There is only one to blame, which is me. I made the team, I chose the players to start and at half-time I tried to improve the situation, but it was not enough.

Alli’s future now is looking increasingly bleak as Mourinho freezes him out.

It was just his third start and he has not stayed on past 60 minutes, which could make it difficult for him to get any rhythm.

But Mourinho expects all of his players who come into the side to hit the ground running.

“That’s an obvious thing. Everybody works the same, trains the same, learns the same. We prepare every match with the same care, the same tactical work we did yesterday is the same we did before Burnley, before Manchester, before every match.

“So of course I expect. But again I go back to the beginning and it’s my responsibility to chose the players to play.”

Royal Antwerp coach Ivan Leko, whose side were worthy winners, said: “I am a really proud coach. Jose Mourinho made four changes at half-time, how many times has that happened in his career?

“You cannot imagine how happy I am. Not because I have beaten Jose Mourinho, I could never beat him.

“I did not beat him, my team beat his team and I am just grateful and happy to have a chance to meet and play against the best team in Europe.”