Crystal Palace have 'a boardroom belief' that the manager needs to change. Mourinho will be aghast. 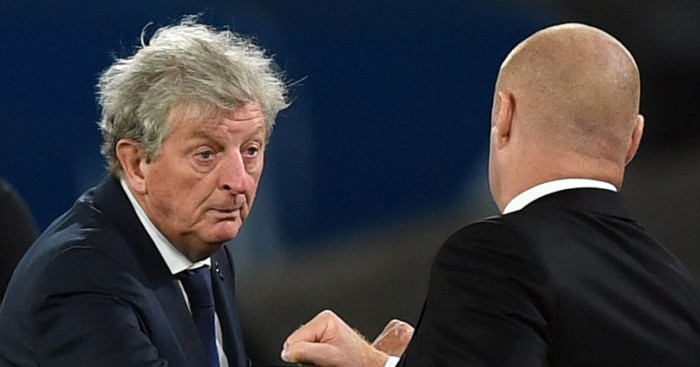 Jose Mourinho has paid tribute to “our boss” Roy Hodgson – as Crystal Palace line up his replacement.

Hodgson is the oldest manager in Premier League history and will start next season at the age of 73.

He signed a contract extension at Palace, his 20th team of a remarkable managerial career, in March. But a run of seven consecutive defeats have persuaded the club to consider a change in the coaching hierarchy.

The Sunday Mirror say Hodgson ‘is facing the chop’ after that patch of form has left him ‘under the microscope’ at Selhurst Park.

As a result, ‘there’s a boardroom belief it’s time for a managerial change,’ with Sean Dyche the main target.

The Burnley manager ‘would like purse strings loosened’ at Turf Moor after taking the club into the top half against expectations. Is he under the impression that Palace spend money?

The news that Hodgson could soon be out of work will come as a surprise to Tottenham manager Mourinho, who spoke fondly of his contemporary earlier this week.

“In the end there is always a boss,” he told Sky Sports. “Sir Alex was our boss for many years, now Roy is our boss.

“It’s a way to show respect to the one who has more experience and is in the league for a long time.

“I think especially for the younger people to look at the top of the building and say: ‘He is the boss. He is the one’. And I think we should all respect that.

“I like him a lot. I admire him. I had a great relationship with him when he was the England manager and I am so happy that for another season he has reached his objectives and that next season he will be there again to be our boss.

“He’s a great person, it’s incredible. He has respect for everybody, so I think ‘the boss’ fits him perfectly.”