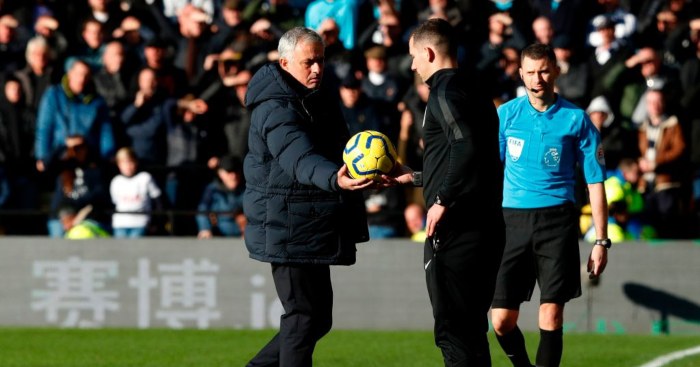 Jose Mourinho was keen to avoid talking about VAR after Tottenham drew 0-0 against Watford on Saturday.

Troy Deeney saw his second-half spot-kick saved by Paulo Gazzaniga, but it was another point claimed during their current resurgence under Nigel Pearson.

Watford have now taken 14 points from their last six games and are looking upwards in the final third of the campaign.

They came up against a Spurs team stuttering under Mourinho and lacking a goalscoring threat without the injured Harry Kane.

Mourinho‘s side have now gone three league games without finding the net and are without a win since Boxing Day, meaning their top-four chances are diminishing with every match.

On his side’s performance, Mourinho told BT Sport: “I talk about Tottenham‘s performance separate from refereeing and VAR decisions because I prefer not to comment.

“Tottenham’s performance was good. We started very well. We were very dominant in the first half until they did what they always do – they had that period were they started winning more second balls, put more balls into the box and had one or two set plays. It’s impossible to always dominate them.

“In the second half the game was more 50-50. We tried with the ammunition we have in the last period to bring more energy, more vision and more quality with Eriksen and were a few millimetres from wining the match.

“Overall it was a good match.”

On refereeing decisions, Mourinho added: “I leave the VAR decisions to the pundits.

“Gazza did a job for us and its an important save.

“I think we deserve to win this match. To lose would have been too harsh on the boys.”