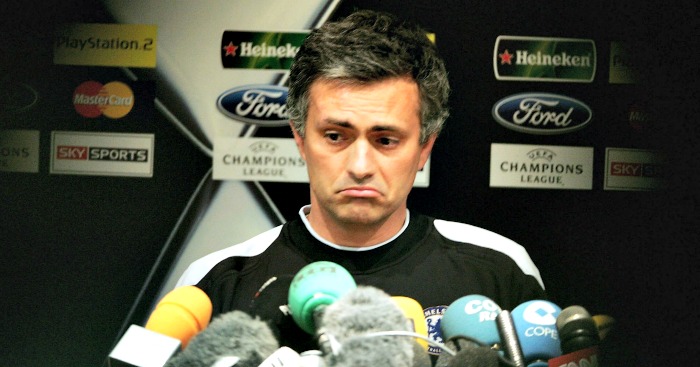 20. “Why have Chelsea suffered so much since I left? Because I left” – on Luiz Felipe Scolari’s Stamford Bridge sacking in 2009.

19. “There are only two ways for me to leave Chelsea. One way is in June 2010 when I finish my contract and if the club doesn’t give me a new one. The second way is for Chelsea to sack me. The way of the manager leaving the club by deciding to walk away, no chance! I will never do this to Chelsea supporters” – on how his first spell at Chelsea might end.

18. “It’s like having a blanket that is too small for the bed. You pull the blanket up to keep your chest warm and your feet stick out. I cannot buy a bigger blanket because the supermarket is closed. But the blanket is made of cashmere” – on a Chelsea injury crisis.

17. “For me, pressure is bird flu. I’m feeling a lot of pressure with the problem in Scotland. It’s not fun and I’m more scared of it than football.”

16. “Young players are like melons. Only when you open and taste the melon are you 100% sure that the melon is good.”

15. “If the club decide to sack me because of bad results that’s part of the game. If it happens I will be a millionaire and get another club a couple of months later” – in March 2007. Chelsea called his bluff six months later.

14. “He must really think I’m a great guy. He must think that, because otherwise He would not have given me so much. I have a great family. I work in a place where I’ve always dreamt of working. He has helped me out so much that He must have a very high opinion of me” – on God.

13. “I want to push the young players on my team to have a proper haircut, not the Rastafarian or the others they have” – on his new short haircut.

12. “My players did not get the respect they deserved from day one to the last day. These are words that I really feel, but now I have a fiction story and let’s try to enjoy it,” began Mourinho at a Chelsea awards dinner in May 2015.

Speaking on Manchester United, Mourinho said: “This is a game with two goals, but there is one team that like to play without the ball. That team plays really well and the ball goes and goes and goes and the quality of the ball possession is good, but they don’t score. No points. They asked the FIFA committee if they can win like this but they’re told it’s not possible. That the bigger possession is not essential to win matches and they are not champions.”

Speaking on Arsenal, Mourinho said: “There is a third team, and the third team wants to play with two goals. They were scoring some, they were also conceding some. But they score really beautiful goals and then the bus comes along and they couldn’t do it.”

Speaking on his Chelsea side, Mourinho adds: “And finally there is a team. They wanted to play with the normal rules and they know that in matches they have to score one more goal than the opponent. How can you do this? By scoring lots of goals, by not conceding and scoring one.”

10. “You may as well put a cow in the middle of the pitch, walking. And then stop the game because there was a cow” – on Newcastle’s time-wasting.

Four separate questions from BT Sport’s Des Kelly elicit the same response from Mourinho after a 3-1 defeat to Liverpool in October 2015. Kelly then asks whether he wishes to send a message to the Chelsea fans, to which Mourinho replies: “They are not stupid. The fans are not stupid.” Kelly’s questions bring a further three answers of “No” from the Chelsea boss, as well as a “Nothing”, and a final “I cannot say”.

8. “You can say the linesman’s scored. It was a goal coming from the moon or from the Anfield Road stands” – on Luis Garcia’s ‘ghost goal’ for Liverpool in the 2005 Champions League semi-final.

7. “If he is right and I am afraid of failure it is because I didn’t fail many times. Eight years without silverware, that’s failure. He’s a specialist in failure. If I do that in Chelsea, eight years, I leave and don’t come back” – on, well, you know.

6. “It’s not important how we play. If you have a Ferrari and I have a small car, to beat you in a race I have to break your wheel or put sugar in your tank” – on criticisms of his playing style at Inter Milan.

5. “The only club where her husband replaced me was at Inter Milan, where in six months he destroyed the best team in Europe at the time. And for her also to think about me and to speak about me, I think the lady needs to occupy her time, and if she takes care of her husband’s diet she will have less time to speak about me” – on Rafael Benitez.

4. “It is omelettes and eggs. No eggs – no omelettes! It depends on the quality of the eggs. In the supermarket you have class one, two or class three eggs and some are more expensive than others and some give you better omelettes. So when the class one eggs are in Waitrose and you cannot go there, you have a problem” – on the lack of funds available to him in 2007.

3. “If they made a film of my life, I think they should get George Clooney to play me. He’s a fantastic actor and my wife thinks he would be ideal.”

2. “I think he is one of these people who is a voyeur. He likes to watch other people. There are some guys who, when they are at home, have a big telescope to see what happens in other families. He speaks, speaks, speaks about Chelsea” – on Arsene Wenger.

1. “I have top players and, I’m sorry, we have a top manager. Please do not call me arrogant because what I say is true. I’m European champion, I’m not one out of the bottle, I think I’m a special one.” – on taking over at Chelsea in 2004. A special one, not The Special One, y’see?