Home Mediawatch ‘JOSE ON THE WARPATH’ and more utter nonsense… 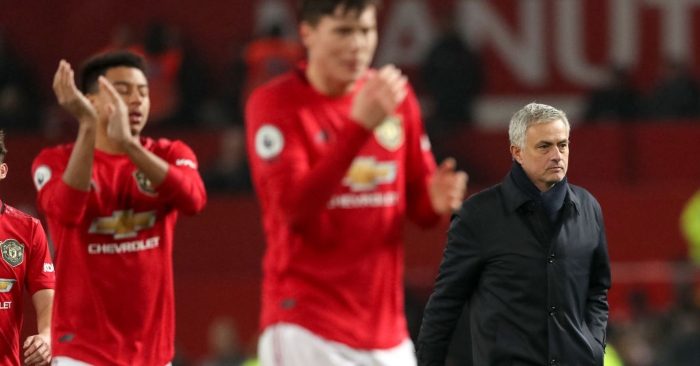 What Mourinho said on Wednesday night after playing and losing to Manchester United was this:

Not that, because that was an advert, but this:

“United results against the best teams this season have been good. Chelsea, Liverpool, Leicester.

“For the way they play it is easier for them. They are not afraid to have a defensive approach.

“It is easier for them against better teams, against teams who want more of the ball.”

But because this is Mourinho and there is mounting desperation for a beefy narrative, you end up here:

When you have downgraded it to a ‘subtle dig’ by the very first sentence, you know that this is a very, very shallow dig. By the third sentence, it’s just fiction…

‘Mourinho spoke to the press after his first defeat as Tottenham boss, and couldn’t help aim a dig at United, suggesting the Red Devils are no longer a big team.’

No he didn’t. He simply discussed tactics in an informed manner and you have chosen to turn it into the biggest story of the day because Digs > Football.

Still, at least you’re not Goal with their headline of ”It is easier for them against better teams’ – Mourinho hits out at Man Utd for defensive approach’, as though Mourinho would be anything other than impressed by a team’s ‘defensive approach’. He would absolutely bloody love one of those at Tottenham.

During image
Still on the Mirror website and they know exactly what they are doing with their ‘Tottenham stars ignored Jose Mourinho’s advice during Man Utd defeat’ headline.

But it’s too late because we clicked. And we hate ourselves.

What is it good for?
Jose Mourinho was actually quite measured in all his responses on Wednesday night. “We have to blame ourselves. I think United must obviously be happy with the points, and overall they deserved it,” he said, while agreeing with Dele Alli that Tottenham had probably been a bit complacent. “I tried to fight exactly that state of mind,” he said.

The leading headline on the MailOnline football page on Thursday morning:

‘JOSE ON THE WARPATH’.

To be fair, he does look absolutely raging…

Let’s pretend
Now we head over to the Daily Express website (because it’s our job) to find that ‘Jose Mourinho accuses Man Utd of ‘pretending injuries’ as he loses first match for Spurs’.

And there we were thinking that Mourinho has been quite low-key in the wake of his first Tottenham defeat, when in fact he has been having ‘digs’ and is ‘on the warpath’. And now he ‘has tore into Manchester United following his side’s 2-1 defeat last night’. Did he? So he is angry with both Manchester United and Spurs? That’s a whole lot of anger even for Mourinho.

And what did he actually say in this ‘tearing’ into United, in between repeating several times that he thought they deserved to win the game?

“I thought the second half we’d be back to normality and normality was to have control of the game but when you concede a goal like we did it’s difficult.

“They took a few steps back, started to block low and they were clever in the way they were getting fouls and pretending injuries and controlling and then still dangerous on the counterattack.”

Open up, make room for me
The dictionary definition of ‘open up’ is ‘to start to talk more about yourself and your feelings’.

So it’s great to see Ole Gunnar Solskjaer start to talk more about himself and his feelings ‘on Jose Mourinho’s reaction in tunnel after Man Utd win’ (Mirror).

You might think that only a trained therapist could have coaxed this out of the Norwegian:

“No-one likes to lose the game. But we are all the same, we just want to win games.”

We think he might have said too much, but once those floodgates open…

Line dancing
‘The season began with a debate over whether Rashford can lead the line and his lethal combination of pace, power and clinical finishing is putting those doubts to bed’ – The Sun.

Still with the Southgate…
In Wednesday’s Mediawatch, we revealed how all those headlines about Gareth Southgate taking over at Manchester United had stemmed from an ‘exclusive’ in The Sun that talked in ‘coulds’, ‘mays’ and ‘mights’ because essentially the story was about something that happened in 2006. That original piece – though a little cheeky with its headline – made it clear that Mauricio Pochettino is still the odds-on favourite.

Undeterred, the BBC are still using that same story to sell their gossip page 24 hours later…

Oh Auntie, you are embarrassing.

Tim Sherwood thinks Watford – bottom of the Premier League – will be fine because they have ‘real men’ and ‘good British lads’. pic.twitter.com/7tiiW6jFIr

Recommended reading of the day
Jonathan Liew on the Merseyside derby