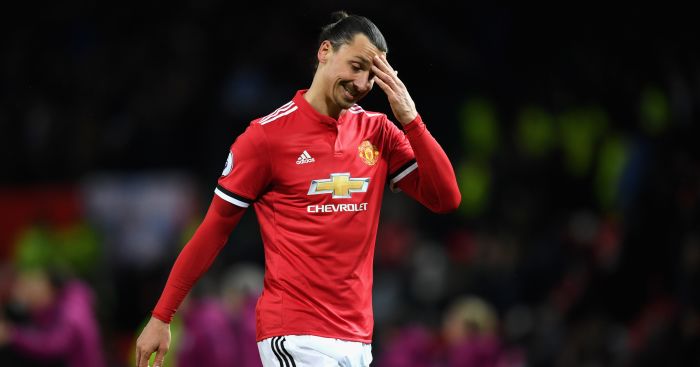 The 36-year-old’s self-confidence was backed up by a 28-goal haul and numerous match-winning displays as the Swedish striker established himself as fans’ favourite last season.

Ibrahimovic scored at Wembley in the EFL Cup and Community Shield successes, but serious knee ligament damage denied him a starring role as United won the Europa League triumph in his homeland.

April’s quarter-final against Anderlecht looked to be the veteran’s last appearance for the club, only to be re-signed in August until the end of the 2017-18 campaign having impressed during his rehabilitation.

However, Ibrahimovic has not featured since Boxing Day after suffering a knee complaint seven matches into his comeback and Mourinho now expects him to leave this summer as talk of a move to Major League Soccer’s Los Angeles Galaxy rumbles on.

“For Zlatan, we all think it’s his last season at Manchester United,” the United boss said. “And it will be a very personal decision for him to play or to stop.

“I think he won the right of choosing his life, his future, such an amazing player with such an amazing career that only that awful injury in the wrong moment broke a fantastic couple of seasons that he could and should have had with us.

“This season has been really difficult for him. Is he injured? No, he’s not injured. Does he feel totally happy, totally ready and totally convinced that he’s in a condition to help the team? In this moment, no, but he’s such an honest guy and such a champion.

“He only wants to be back with that feeling of ‘I’m totally ready for it’, so he’s working hard and hopefully his evolution brings him to that level where he wants to have a positive answer.”

Ibrahimovic was in playful mood on Thursday evening when asked about the prospect of heading to MLS.

“I did not know that several Swedes went to MLS – that means it’s tempting to play in the United States,” Ibrahimovic told Expressen.

“Los Angeles is a nice city and I’ve been there a lot on vacation. It is laid back. There is nothing more to say.

“I would have told you if there was anything. I think there are rumours all the time (about my future).

“When I play and when I do not play, there are rumours. That’s good, that means I’m alive.”

Ibrahimovic is sure to want a grandiose end to his time at United, who could also see Marouane Fellaini leave this summer.

A largely divisive figure after linking up with former Everton boss David Moyes in 2013, the imposing Belgium midfielder ignored the critics to establish himself as a key player under Mourinho.

But Fellaini has yet to repay that faith by signing a contract extension at Old Trafford, fuelling speculation that he will leave as a free agent in the summer.

“Is he going to stay or leave? I don’t know,” Mourinho said of the Belgium midfielder who is currently out of action with a knee complaint.