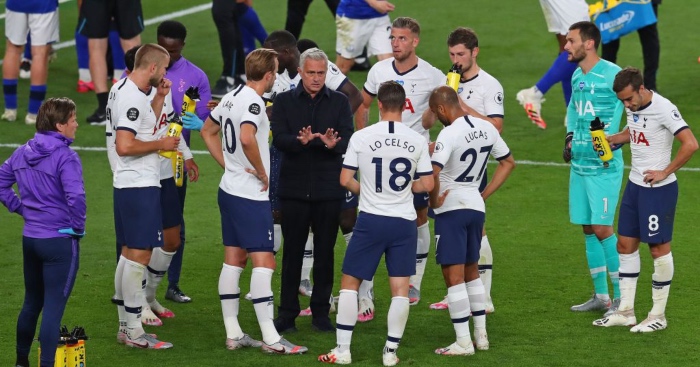 In a brief hiatus from searching for his own name on Google and trawling football social media pages for anything disparaging his team, Jose Mourinho this week admitted he would break social distancing rules to hug “fantastic guy” Carlo Ancelotti before Tottenham’s clash against Everton:

“I think it’s a privilege for the Premier League to have Carlo back, it’s a privilege for Everton to have Carlo as manager, or head coach, whatever way you want to call him. As a manager we all know him, and we don’t need to speak of him, because his office in his house, I don’t know if it’s the house in Milan or London or Liverpool but some office in one of his houses is full of cups so he doesn’t need anyone to speak about Carlo.”

They are two of the most decorated managers in world football with 35 major trophies between them, brought in by clubs searching for a taste of that success. But Tottenham’s 1-0 win on Monday did nothing to suggest either would be challenging any time soon.

The early stages saw Spurs’ pretence at making angles to feed Harry Kane, Lucas Moura and Son Heung-min hampered by cumbersome passing and a lack of patience. Triangles made between Toby Alderweireld, Eric Dier and Harry Winks ultimately ended in one of them humping the ball forward to no-one in particular.

The first time Spurs did inject some urgency into proceedings, midway through the first half, they scored. It was very scrappy, with Kane’s shot blocked before Giovani Lo Celso’s wayward effort was deflected into his own net by Michael Keane. But there was some tempo to the attack at least. A straw being grasped perhaps.

Everton’s only chance of the first half came as their midfield – who may as well have been absent – were bypassed as Yerry Mina fed the ball into Richarlison in a pocket of space behind Winks and Moussa Sissoko, with the Brazilian firing just wide of Hugo Lloris’ post. The French goalkeeper then had a little shout at Son, who gave the ball away and failed to track back. A disagreement that boiled over as the players walked off the pitch. Well, simmered. It was slightly exciting at least.

Son could have added to the scoreline after the break, once through a long pass from Alderweireld; the second time following some excellent link-up play between Kane and Lo Celso. But they were chances seemingly stemming from nowhere. There was again no discernible middle third for Spurs, and if they can’t get a grip of a game against this Everton midfield, they never will.

Unlike other big teams, Spurs don’t build pressure. At least not in a conventional way. Their forward players – on this occasion Son, Kane and Moura – either create a chance or give the ball away. There’s no turning out in possession when there isn’t an option, or waiting for gaps to appear by switching the play and forcing defences to slide across the pitch. It’s a perpetual counter-attack.

That might be the plan. And fair enough, if you’re creating lots and defending well it can work; Mourinho knows that better than anyone. But it wasn’t as though Spurs were unlucky not to score more goals, and despite the centre-backs dealing very comfortably with Everton’s hopeful balls into the box, the loss to Sheffield United illustrated perfectly their defensive limitations when they come under the pressure this system creates.

Moussa Sissoko looks more and more just like a body to fill a space, and Winks, as much as he looks composed and pretty on the ball, is far more huff than puff. They don’t seem to do very much in attack or defence.

They were comfortable against Everton, but only because the midfield trio of Andre Gomes, Tom Davies and Gylfi Sigurdsson were – and I don’t say this lightly – absolutely atrocious. There was no energy, no fight and no quality.

Everton had just six touches in the Spurs box in the entire game despite having an even split of the possession – it was an embarrassing performance. They have now lost 28 of the last 43 games in which they’ve been behind at half-time – a stat that sums up their display in north London. They never looked like getting back into it.

This was an important win for Mourinho, and keeps Spurs in the hunt for European football. But it’s not one that will lead their supporters to believe in his claims that he has the “nucleus” in place now to carry them through the next five years.

If by a “nucleus” he means lots and lots of gifted but frustratingly inconsistent forward players, then he’s absolutely right – that was again on show. But the more typical football nucleus – the core for which he was so famous for building on two occasions at Chelsea, for example – wasn’t really tested, and the never-ending counter-attack will only work if he is given money to ensure suitable cover is there to pick up the pieces when they inevitably give the ball away.

But he knows he won’t be given significant money. He now must be the Frugal One, and become less manager and more coach. We won’t hold our breath.