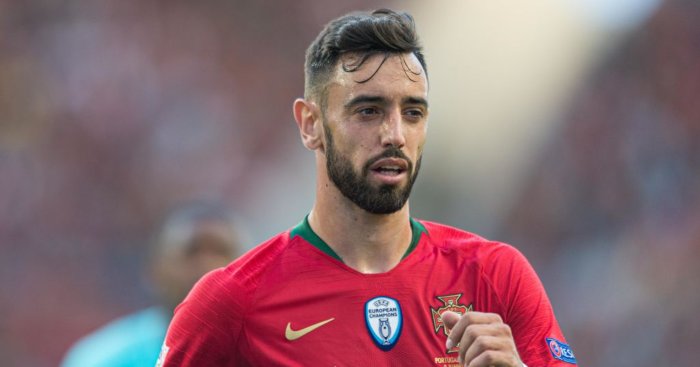 Manchester United will have to pay at least £54million to land Sporting Lisbon midfielder Bruno Fernandes this summer, according to a journalist.

There have been various conflicting reports in the Portuguese press over a deal for Fernandes but they all agree on one thing: a bid from United is imminent.

And journalist Duncan Castles has claimed that Fernandes’ agent Miguel Pinho has told Sporting that United will make an offer this week.

“It’s welcome news to Sporting, whether it turns into the transfer that a lot of Manchester United fans are hoping for we will find out,” Castles said on The Transfer Window podcast.

“Sporting have been informed by Bruno Fernandes’ agent, his brother—in-law Miguel Pinho, that an offer will come in from Manchester United this week.”

On the new valuation, Castles added: “Sporting have retained their pricing on the player. In fact, they’ve slightly increased it I think, given this news from the brother-in-law, and they are saying that they will not sell the player for less than €60m [£54m].

“The flaw of course is that Miguel Pinho has been telling Sporting that an offer would be coming in from major clubs for several months now, so I think there’s a degree of scepticism at the Portuguese club that this offer will come.

“But they are ready to sell if the money is right and remain hopeful that they will be able to cash in on the player.

“As we’ve told you before, Fernandes is the figure in their squad that they identified as a player they wanted to sell this summer to raise cash, their most valuable player given the goals he scored last season, and they are ready to deal at the right price.

“I’m also told from the Sporting end that there is some interest from French clubs.

“Again, whether that transpires into a bid or not remains to be seen.”