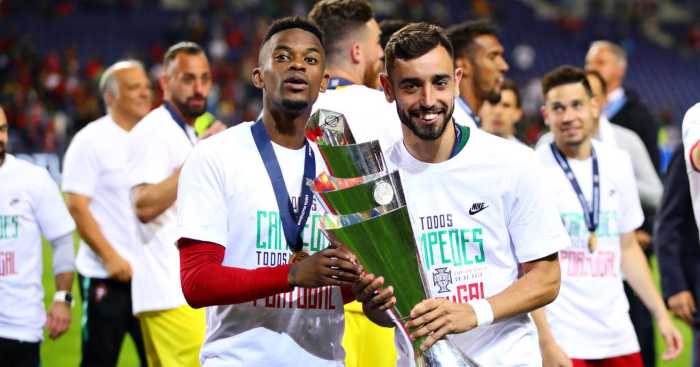 Sporting Lisbon midfielder Bruno Fernandes has his sights set on a move to Premier League side Manchester United, according to one journalist.

Recent reports claim United have seen an initial €35m (£31m) offer for Fernandes rejected, but the club’s executive vice-chairman Woodward is due to meet with Fernandes’ representative over the best way forward regarding negotiations with Sporting Lisbon.

It’s believed personal terms have already been thrashed out between Fernandes’ agent and United, with the midfielder – who scored or assisted 50 goals in 53 appearances last season – reported a few weeks ago to have agreed a €6m a year salary plus bonuses over a move to Old Trafford.

But United still need to thrash out a deal with Sporting over the transfer fee, with United hoping to pay considerably less than the €80m (£71m) exit clause in his contract with the Portuguese giants.

It is suggested the Portuguese club would accept €70m (£62.7m) for the prolific midfielder, with United currently still some way short of tempting Sporting into the sale and hoping to barter them down to the £50million (€44.8m) mark.

Talks between Woodward and his agent are due to commence last week, according to a report in The Sun.

And now Gazzetta dello Sport reporter Nicolo Schira has provided a bit of an update by claiming that United are Fernandes’ number one choice when deciding on his next club.

“He is waiting for the agreement between # RedDevils and Sporting.

The first #BrunoFernandes' choice remain #ManchesterUnited: he is waiting the agreement between #RedDevils and Sporting. Meanwhile Ed Wooward is interested in Sergej #MilinkovicSavic, but #Lazio want €120M to sell him. #transfers #MUFC #mutd