Home F365 Features Prick of the Week No. 29: Juan Cala and how not to handle a race row 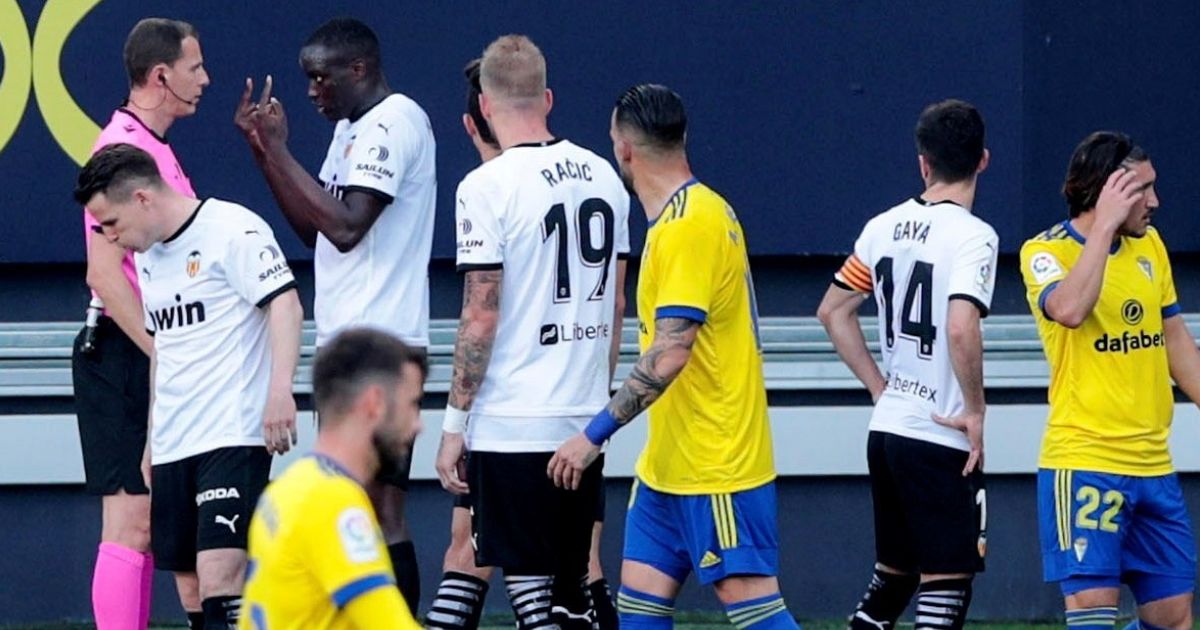 Miserable one this week. And it’s not going away. Valencia’s players walked off the field after Mouctar Diakhaby alleged Cadiz’s Juan Cala aimed a racist insult his way. And that was just the start of it…

So who’s this week’s prick then?
It’s a multi-layered thatch of deeply unpleasant prickery this week, like a particularly tangled web of sturdy dried tagnuts trapped within a sweaty arse beard. It’s pricks all the way down. It’s Juan Cala. It’s the authorities. It’s the fact the game continued with Cala but without Mouctar Diakhaby. It’s the fact that a genuine opportunity to turn something so thoroughly shitty into something powerful was pissed away. It’s the fact everyone is covering their (tagnut-clogged) arses and refusing to acknowledge they did the pissing. It’s just everything.

What have they done?
So let’s get right back to the start of this particular incident, which is itself just the latest in a depressingly frequent and never-ending torrent of racist sh*t that infests and infects the sport/world/existence. It wasn’t even the only one this weekend.

Anyway, what happened was Valencia’s Mouctar Diakhaby alleged he was on the receiving end of a racist insult from Cadiz’s Juan Cala. Cala denied it. The referee didn’t hear it. Valencia’s players left the field in a striking and potentially powerful stand against racism.

Then they came back on, minus Diakhaby, to finish the game. Cala continued. Initial reports claimed Diakhaby wanted his team-mates to finish the game and this was why they returned to the field. Subsequent reports suggest there was rather more coercion involved in completing the game, with talk of forfeits and further punishments should Valencia fail to fulfil their obligations to finish it.

Nobody is now willing to take credit for that particular sh*tshow of a decision, but it’s a horrendous look. No racist incident can be good, no positive message can erase the initial offence, but the sight of the whole Valencia team walking off the pitch in solidarity was a powerful one. Potentially a very useful one in the ongoing fight. A truly zero-tolerance approach.

That has all now been lost because it was more important to someone or some group of someones to get the fixture completed, even if that meant de facto penalising the team and player alleging racism.

Now there are a couple of things to say here. There will be those who say Cala is ‘innocent until proven guilty’ and any failure to complete the game implies guilt. But completing the game, with Cala and without Diakhaby (who felt unable to continue) does much the same thing just the other way round.

It’s around this point of the argument that people will say it’s just Diakhaby’s word against Cala’s and he could have made it up. Technically possible, although the brilliant Jonathan Liew recently took this particular line of thought to task in memorably effective style. You really just need to read the whole thing, but the fundamental is this: why would anyone make that up and put themselves through everything that then follows? To allege racism in the already febrile and tribal heat of football discourse is to bring upon oneself a vast amount of stress and hassle and character attacks. Your story will be picked over and analysed for the tiniest shred of inconsistency, for the tiniest possible error. Your reaction needs to be just angry enough to make it clear A Bad Thing Happened but not so angry that you look like it is in fact you who lost control. And for what? What does Diakhaby actually stand to gain?

Now in the first draft of this we were actually at pains to insist that Cala was not the principal prick here. His case will be heard and answered in due course, at which point we can all pass definitive judgement on his actions.

First, Cala’s utter absence of any kind of conciliatory tone is quite something. Threatening to sue everyone who has ‘defamed’ him, up to and including Diakhaby himself, certainly don’t appear to be the actions of someone wishing to defuse and dampen the unpleasantness. Calling what he has gone through a “public lynching” is – even allowing for translation – an undeniably and staggeringly poor choice of words. Insisting you stand for the fight against racism while simultaneously denying any racism actually exists in Spanish football is…an interesting stance.

So what happens next?
This is already a huge scandal, and it will grow. The scale of the mishandling of the initial incident and the fact that the truth of what happened between Valencia leaving the pitch and returning to it will inevitably dribble out means that, counter-intuitively, some good may still come from it. This is already an embarrassing saga for La Liga and only likely to become more so. There must be some hope that they and others will be more determined to avoid a repeat, even if only in their own self-interest rather than anything vaguely noble.

Certainly, Valencia’s increasingly hard-line stance in defence of their own player and actions offers encouragement. Their response to Cala’s press conference is, frankly, unimprovable.

Mourinho Corner
A relief really to get back to more lighthearted matters. Thanks, Jose. He’s been on good form, too, merrily chucking players under his bus with even greater abandon than usual. All of them went under when it was put to him after Tottenham lost yet another lead that defending leads used to be a Mourinho trademark. “Same coach, different players,” he chortled, accidentally revealing it was never down to him in the first place.

🗣 @juliette_grace "In the past, holding on to a lead is what you've been so good at doing"

The most revealing bit of Jose work, though, was the very strange Toby Alderweireld Situation. Having missed the Villa game before the international break through illness, Alderweireld was again absent at Newcastle. Mourinho insisted this was because he had not returned swiftly enough from international duty to do his covid tests and rejoin the squad for training until Saturday. Mourinho made sure everyone would put this down to some kind of indiscipline by twice saying “I don’t want to say indiscipline” in that “I didn’t say that, you said that” way that he still thinks is clever.

Quite what Mourinho thought he stood to gain from such public criticism of a senior player who wasn’t even involved in Sunday’s defensive shambles is a mystery, but greater still is how he didn’t realise how easily the inaccuracy would be exposed. As it turned out, a video from Tottenham’s own Twitter account showing Alderweireld at training on Friday did the job.

This, in its way, is a very neat microcosm of Mourinho’s wider problems. Not only are his tactics needlessly boring, hackneyed and antagonistic, but the world has moved on and it’s now far easier to counter them.

Dishonourable Mentions
We’re already thoroughly sick of The Erling Haaland Transfer Saga and it’s still two months until the end of the season when it really gets going. Mino Raiola shaking his head and bemoaning the ‘fake news’ that is fuelling a fire he continues to douse with gallons and gallons of petrol has really ground our gears.