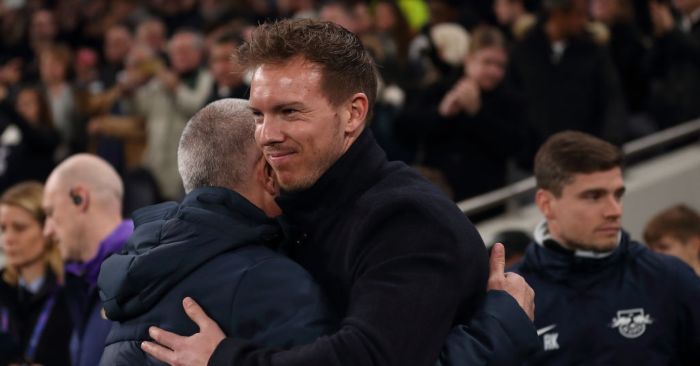 Who’s this week’s hero, Johnny?
Our hero this week is a leggy 6′ 3″ manager, born in Landsberg am Lech, West Germany, who is just 32 years of age – and looks ten younger than that. He has already been a boss for four years in the Bundesliga, firstly with 1899 Hoffenheim (don’t you just love a club that prefixes its name with a year?) and now with RB Leipzig, who are second, just one point behind Bayern Munich. He’s fond of saying “coaching is 30% tactics and 70% social competence”, which sounds about right.

Though on the books as a player for 1860 Munich II and FC Augsburg II, he never played a senior game and had to retire due to a severe and persistent knee knack, after which he went to university to study Business Administration, transferring to Sports Science after four terms. Afterwards, he went into coaching, returning to Augsburg to work under Thomas Tuchel.

Took over Hoffenheim in February 2016 and transformed their season, winning seven in 14 to lift them clear of relegation and the following year, they finished fourth. This, along with his distinctive touchline style, did not go unnoticed and rumours grew that Bayern Munich would be his next club.

Widely regarded as one of the most exciting coaches in world football, he is the youngest-ever manager in the Bundesliga and unsurprisingly the youngest to be in charge for 100 games. Often called a hipster manager, whatever that means, usually by people who have no interest in football beyond these shores.

That’ll be Julian Nagelsmann, then.

What have they done to deserve this then?
Quite simply schooled Spurs with his Leipzig side in the Champions League, handing out a lesson in modern football to a manager who increasingly looks as short of ideas as he is of strikers.

Ironically, he was nicknamed the Mini-Mourinho by Tim Wiese back in his days as assistant coach at Hoffenheim. Within a minute they could have been three up. Not so mini now, it would seem.

The folks over at Total Football Analysis summed up the basic Nagelsmann principle of verticality very well.

“This simply means that the ball will not be cycled from side to side aimlessly along the defensive line. Instead, for each receiving player, there is one clear priority and that is to look to play forward. Obviously, there are times in which there will be no clear vertical pass open. In this instance, the ball will be moved across and the next player will look for a vertical pass.”

And that is why Leipzig are so good to watch and why they can sweep teams aside if they’re not prepared for it; Spurs were not ready for it in the slightest.

After an era when possession football was the fashion and for some had attained an almost holy, morally superior status, this more typical directness and lack of concern for ball retention for its own sake is like ice cold beer on the hottest day of the year. It’s been said his system relies less on teamwork, per se, and more on individuals achieving personal goals which collectively make a successful team. The underlying belief to this is that players are driven by personal achievement first and foremost, rather than their identity being subsumed into the group. In identifying this he may well be plugging into the nature of the modern footballer who is less likely to have traditional club loyalty and may be on the move every few years.

With Tottenham’s hit and hope tactic seemingly the only idea in Mourinho’s playbook, it looked for most of the game as if the two sides were playing two very different versions of the game. As Jonathan Liew succinctly put it in his match report:

“…as Tottenham tried vainly to thwart them with disjointed rhythm and inconsequential long balls upfield, it was hard not to feel that it was not simply one goal separating these teams but something more fundamental than that: a gulf of ambition, of approach, perhaps even of time.”

For more detail on Nagelsmann’s tactics I highly recommend this from the always tasty Tifo Football.

While the RB Leipzig project has many opponents, this is a club which has yet to spend £20million on a single player and had a net spend of £22million last summer, which puts many a Premier League club’s projectile vomit of money into perspective. The previous season they made a £6million profit on transfers, thanks to the £54million Liverpool paid for Naby Keïta. And yet under Nagelsmann’s tutelage they have a very good chance of beating Bayern to the title this year, which is no mean feat at all. Rather, it will be profound.

He’s a refreshing character who often dresses pitchside as though he’s just having an afternoon shopping in town. This is no tracksuit parent figure, nor the heavy-overcoated Mafia boss approach. Yet in his own way he is flamboyant and certainly self-aware. Put it this way: he knows when the camera is on him. And in 2020 that is an important element to the job because the cult of personality has never had more importance.

Anyone grumpy about it?
Spurs fans could be forgiven for looking towards the RB dugout with grumpy envy and for feeling that he’s exactly the sort of innovative, progressive manager they need and not the tired old war horse they’ve been saddled with. Others such as West Ham, Newcastle and Manchester United must look on, weep and say “can we have him one like him, please?”

What the people say
Obviously, most people in the UK don’t pay much attention to the Bundesliga, and unless you’re a dedicated German football follower, perhaps Nagelsmann isn’t a name that means a lot. He is only four years into his managerial career after all, but even so, he’s starting to make an impression, as reflected by the comments that came in this week.

We start with our traditional 4_4_haiku:

Force of the future
Hard pressing and transitions
Driven and measured

‘Let’s take a pledge not to call him the mini-Mourinho. Totally different style on and off the pitch.’

‘Now that his light is shining, it will be interesting to see how he reacts in the inevitable spotlight which will follow as RB Leipzig progress further in Europe.’

He completed football manager when he was 12, that doesn’t go unnoticed!

‘Someone, who from afar, seems to have ‘it’. And he seems to have a handy knack for developing players into proper, top level footballers.’

‘I know envy is rarely a good thing, but I couldn’t help feeling very green-eyed watching his organised, structured and amazing team give Spurs – whose strategy was based around the crossing of fingers and hoping for the best – a one-nil shoeing.’

In the wrong dugout yesterday (from a spurs perspective)

‘He wears make-up and I respect that.’

‘So good, he’s getting to the point where British pundits will start to ask if he can do it on a cold wet night in Stoke.’

I’d give it six months.

What does the future hold?
I have no idea if a Premier League club has approached him yet, nor if he has any ambitions in that direction; there is certainly no reason why he should. However, fans of many clubs with dull managers playing dull football with dull results must look at RB Leipzig with envy. Certainly, many Spurs fans came away from Whatever Their Ground Is Called on Wednesday feeling that their manager was far more expensive, not as good and perhaps even more importantly, simply not as attractive. There seems little future with Mourinho, but plenty of it with Julian.

Nagelsmann is a fantastic contradiction of the Proper Football Man’s notion that you’ve got to have played the game to be a good manager and that “the lads” won’t respect you if you haven’t. These are the dying breed who think an iPad and a whiteboard is a hi-tech bunker. This is a man who admitted to tweaking his eyebrows and wearing make-up (a little bit of bronzer) while taking charge of a Hoffenheim game against Bayern, which is something your PFM would only do after two bottles of brandy and access to the wife’s wardrobe.

Here is someone succeeding in coaching despite never playing a single first-team game. It is almost as though football can be understood by normal people and not just alpha males who have spent all their working lives in a bath and showers with a dozen other naked men.

He is very much the beta male who is sharp, intelligent and interesting. He clearly has a huge career ahead of him and it is only a matter of time before he begins to win titles and trophies. While we so often wonder what on earth some managers are doing during the week, so little positive influence do they seem to have on matchday, Julian is the opposite of that. It’s getting to the point already in his short four-year career that it’d be possible to identify one of his teams by the way they play without knowing who they were. To achieve this so quickly is nothing short of remarkable. He is at the spearhead of a new generation of much younger than typical European coaches who will surely own the future. Not just the new kid in town, but the new force in football and sooner or later, that force will be felt both domestically and in the Champions League.