Home F365 Features Jurgen Klinsmann, Leeds and a Spurs signing out of nowhere 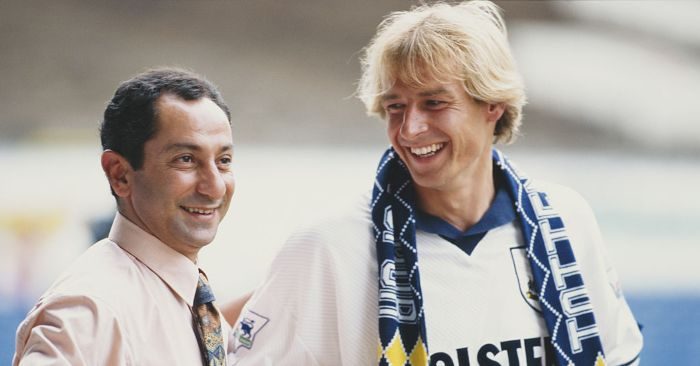 One of the defining transfers of the Premier League era was very nearly scuppered in a press conference room at Elland Road, about a week before it was ever openly discussed.

In the summer of 1994 the Czech striker Tomas Skuhravy was due to sign for Leeds United from Genoa, and the deal was so far advanced that the media had been asked to assemble to introduce him to the world.

The Italian club had a replacement all lined up: a good one too – German chap, World Cup winner, played for Monaco, striking blond hair. You’ll have heard of him. But the Skuhravy move collapsed at the last minute, which meant red faces at Leeds and, for Genoa, no replacement required.

Jurgen Klinsmann was on the move, though. “I was lucky that after scoring five goals at the World Cup 1994 in the US I received several offers,” he tells the Totally Football Show, “but there is no need to mention their names.” Spoilsport.

Klinsmann had been in France for two seasons, and while he was in America for that summer’s World Cup, he had decided a fresh challenge was in order, at least partly because he didn’t particularly rate his boss.

“I’d become disillusioned with the manager Arsene Wenger,” he said in Hans Blickensdorfer’s snappily-titled book ‘Jurgen Klinsmann’. “He is probably the most intelligent and cultured of those managers working in France, but in my opinion, too nice for the toughness of professional football. It became increasingly clear to me that my career couldn’t end in Monaco.”

Barcelona, Atletico Madrid and AC Milan all made overtures. Everton and Aston Villa were fired by the newly-acquired money, confidence and chutzpah that came with the Premier League; both were keen.

As were Tottenham. But rather than fixing eyes on Klinsmann, that summer they simply wanted…someone. The previous season had been punishing, a Teddy Sheringham injury and FA charges over financial irregularities combining to ensure they only narrowly avoided relegation. Spurs not only thought they would start the 1994/95 season with a six-point deficit, but out of the FA Cup too, as a result of those charges. So Sugar decided they had to make a big splash.

They tried for Chris Sutton but baulked at the £5million Blackburn ultimately paid. They sniffed around Jean-Pierre Papin. There was even talk of manager Ossie Ardiles pulling some strings to get Diego Maradona, but one-too-many brushes with the doping controllers put the kibosh on that one.

The name Jurgen Klinsmann hadn’t really been mentioned in public. Broadly because it hadn’t been mentioned in private, either. Accounts differ slightly as to how the possibility of him joining Spurs first came up: writing in his autobiography (officially titled ‘What You See Is What You Get’, but it might as well be called ‘Needless To Say, I Had The Last Laugh’), Sugar says he was loafing on his yacht in Monaco when Klinsmann’s lawyer Andre Gross called him out of the blue to offer the German’s services. Klinsmann suggested to Blickensdorfer that Sugar called him, and invited him to said yacht.

Either way, negotiations were seemingly incredibly brief. Klinsmann was happy to accept Tottenham’s wage structure of £8,000-a-week and Sugar recognised the £2million fee was a bargain. Klinsmann confirms that was the very first time he spoke to anyone at Spurs, and that the deal was done there and then. “Yes, that is true. And [Sugar] made a fantastic cappuccino on his boat.”

At the time, Sugar suggested that the transfer had been in the works for a while. “We started our negotiations while Klinsmann and Germany were still in the World Cup,” he said. “Then when they were knocked out, Klinsmann went off on a couple of weeks’ holiday. We kept going with our talks but only in the last 48 hours has it all come to a head.” This was probably to give the impression it was all part of the great businessman’s grand plan, rather than something concocted on the fly, because pretty much everything that’s been said in later years – including by him – contradicts that.

Still, part of a plan or not, Sugar couldn’t believe his luck. But he quickly became paranoid that someone would gazump him before things could be wrapped up. So he arranged for a Sky TV camera to happen upon him and Klinsmann emerging from Monaco’s stadium after they had finalised the deal with the club, reasoning that ‘once I got Klinsmann shaking my hand at the dockside live on TV, it would put paid to any snipers trying to hijack the deal.’

Klinsmann, slightly startled, shook accordingly, for both the Sky camera and a still photographer who was sent along by one Nick Hewer, then Sugar’s PR man, now the presenter of Countdown.

Remarkably, before that ambush/photo op, nobody seemed to have a single sniff the deal was happening. There was no mention of it in the papers in the days before the deal, which even then was unusual but would be completely unheard of today. Not even Ardiles knew much about it, which was particularly notable given he was Tottenham’s actual manager.

‘Jurgen was a player on a completely different level,’ Ardiles wrote in his autobiography, ‘a World Cup star – at the time it was like signing Maradona, more or less. I remember my first thought was, ‘I doubt he’ll come.’ I saw the situation as a difficult one, what with the six points docked and everything. But Sugar spoke with him and he agreed and came over.’

Which does of course beg the question: why did Klinsmann come? After all, here was one of the best strikers in the world joining a team who had nearly been relegated and would start the season with a six-point penalty, in the days before the Premier League was a ‘destination’ for Europe’s most talented.

Sugar suspected he just wanted to live in a trendy area of London (Highgate, specifically), and Ardiles concurred. Blicksensdorfer’s theory was that Klinsmann’s relatively comfortable background, combined with a certain wanderlust, simply freed him to try new things and live in new places.

But let’s go to the man himself. “I certainly felt the Premier League was on the rise,” he tells the Totally Football Show, “and I believed it could challenge the other top European leagues for players, success in European competitions, and fan support. I think it’s fantastic how the Premier League has developed, and I’m proud to have been there in the beginning.

“I chose Tottenham because of the straightforward approach by Alan Sugar and Ossie Ardiles. To play under Ardiles meant a lot to me and historically Tottenham was always known for attacking football.”

He expanded on this point to Blicksendorfer: “I wanted to escape from Monaco. It wasn’t a paradise for me. I couldn’t carry on playing home games in a place that didn’t feel like home. But Alan Sugar immediately managed to convey this sense of home to me. That meant more to me than any Spanish offer could. It may sound strange, but it was a good decision and I can honestly say that it was the right one.”

And the London theory? “[That was] not a big factor, but another reason why I chose Spurs.”

When this German with a reputation for on-pitch theatrics arrived in London, the media reacted in a mature and progressive manner.

Just kidding: it was in many places an absolute embarrassment. ‘£1M A YEAR ON DIVE BOMBER’ bawled the headline in the Daily Mirror, the accompanying editorial suggesting he would ‘still ply his black art in opposing penalty areas.’

‘HACKETT BLOWS WHISTLE ON U-BOAT’ was the People’s headline to some quotes from former referee Keith Hackett, who bloviated: “The message to Klinsmann must be that it will not be stood for here. He’ll be playing with the world’s best referees and won’t get away with any nonsense…English refs will soon spot anything like that and he won’t be allowed to get away with it here. English crowds won’t stand for it either.’”

And Matthew Norman, writing in the Evening Standard, ramped things up a notch: ‘The signing of the great diver Klinsmann is a big insult. From the savannah of Central Africa to the rain forests of Papua, right up to the igloos, everywhere, in fact, apart from Germany, everyone hates Jurgen Klinsmann….his nationality is unlikely to endear him to the predominantly Jewish season-ticket holders at the Lane.’

Charming. For his part, Klinsmann had been tipped off about the perception in England that he was a diver. So in his introductory press conference, he sat down and said: “To begin with, I have a question for you…is there a diving school in London?”

And with that, the press was disarmed. He actually had a mask and snorkle in his bag and had even looked into the possibility of hiring an old fashioned diving suit, complete with helmet, but in the end settled for just the pithy line.

Of course, we all know what happened next. Klinsmann scored 29 goals for Tottenham and paved the way for more global stars to arrive in the Premier League, before leaving for Bayern Munich at the end of the season. Oh, and it was around that time Tomas Skuhravy eventually left Genoa to play for Sporting. What could have been.