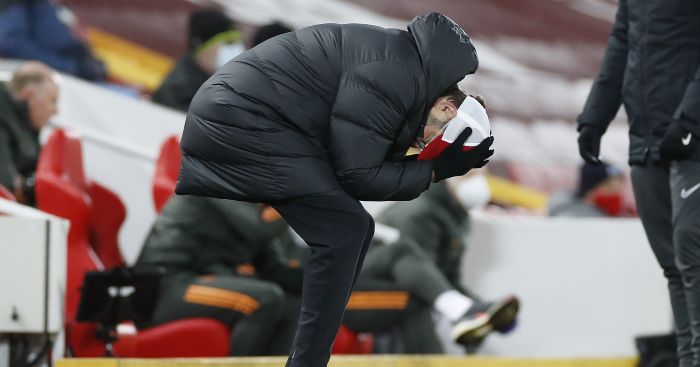 Jurgen Klopp wants to bring Paris Saint-Germain superstar Kylian Mbappe to Liverpool in an attempt to ‘refresh’ his squad, according to reports.

Mbappe could be on his way out of France in the next year after reportedly telling PSG he wants to leave.

That’s sent the footballing world into a frenzy as Real Madrid, Liverpool and Juventus are all linked with the player.

A report back at the beginning of this month described Liverpool boss Klopp as a ‘rival’ to Real Madrid for his signature.

Klopp ‘dreams’ of signing Mbappe with the German boss desperate to have him ‘at his command at Liverpool’, with the report adding at the time that he ‘maintains contact’ with the France international.

And now Spanish publication Sport – the same newspaper that brought us the news of Klopp’s interest earlier in the month – (via Sport Witness) claims that Liverpool are still a ‘strong opponent’ to Real Madrid for Mbappe’s signature.

Los Blancos are apparently giving Eden Hazard until the end of the current campaign to convince them he can become a superstar at the Bernabeu or risk being sold to raise funds for Mbappe.

Sport adds that Klopp ‘bets heavily’ on Mbappe to ‘strengthen and refresh’ his starting XI with the Premier League champions currently fourth this season.

The report continues by saying that Liverpool are ‘willing to compete financially’ with the La Liga giants in their attempts to land Mbappe.

Meanwhile, Mohamed Salah has sent a message to Liverpool by reiterating his long-term future lies in the club’s hands.

Asked about his future by Norwegian channel TV2, Salah said: “I do not know. If you ask, I say I want to stay here as long as I can, but, as I have said before, it is in the hands of the club.

“I will always give 100 per cent to the last minute I am in this club and I want to win as many trophies as I can.