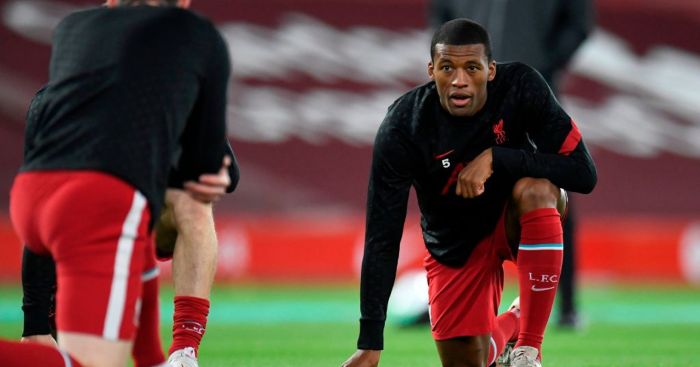 Liverpool manager Jurgen Klopp insists Georginio Wijnaldum’s ongoing contract issue has had no impact on their relationship and he remains optimistic about the midfielder’s future.

The Holland international is out of contract next summer, which means he can begin negotiating with overseas clubs from January 1, and talks about extending his stay at Anfield have hit an impasse despite Klopp clearly wanting him to stay.

He made his 201st appearance – only 28 of which were as a substitute – in just over four seasons in Wednesday’s Champions League defeat to Atalanta.

“I cannot really say a lot about that. I would be happy if he would stay here. I am pretty happy with Gini as you can see when you look at most of the line-ups,” said Klopp ahead of the trip to Brighton.

Klopp has been here before, of course, as he faced a similar situation with Emre Can in 2017-18.

The Germany international made 38 appearances during that campaign but declined the offer of a new contract and left for Juventus on a free contract in the summer.

Klopp’s experience of that means his opinion of Wijnaldum will not change.

“It is no problem. We’ve had situations like this before – with Emre Can for example,” he added.

“He played and he gave his absolute everything until the last day of his contract and Gini will do the same, no doubt about that.

“We are professionals. Our relationship didn’t change at all over the years – it improved obviously.

“We’ve won one or two things together, we know each other better. I’m interested in his life, he’s interested in my life, that is how it is, mine is not so spectacular really – but that is the truth.”