Home Mediawatch Klopp ‘cracking up’ and a ‘lingering issue’ with Sancho

Is Jurgen Klopp 'cracking up'? The Mail ask the question. Plus, some other media nonsense. 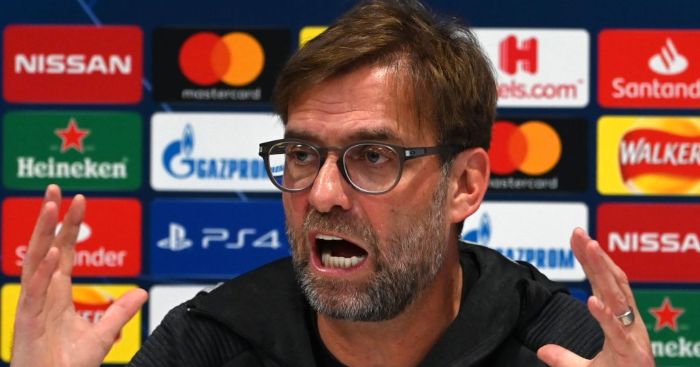 ‘Is Jurgen Klopp cracking up? Liverpool boss claims he is ‘calm’ about being left behind by Chelsea and Man City in the transfer market… but his body language shows signs of suppressed aggression, anger and defensiveness’

…is to be ignored as the work of a completely different entity to the Daily Mail despite, well, the actual URL starting with the words https://www.dailymail.co.uk/sport/football.

The headline was later changed to this, presumably after a small panic…

‘Is Jurgen Klopp REALLY ‘calm’ about a lack of transfers? Liverpool boss claims he’s relaxed about being left behind by Chelsea and City in the transfer market… but his body language shows signs of suppressed aggression, anger and defensiveness’

But is Klopp ‘cracking up’? Well, according to body language expert Judi James:

‘Swinging round in a chair as Klopp does here will give the impression of anxiety or impatience and when he speak of other teams’ signings Klopp switches from his normal friendly smile, displaying his perfect upper teeth, to baring his lower teeth.

‘That looks like a gesture of suppressed aggression or confrontation, suggesting that despite the verbal messages of ‘no problem’ he is perhaps sitting on some resentment or anger.’

Judi James should switch to writing transfer gossip because it looks like Jurgen Klopp is closing in on cracking up.

CAPITAL stuff
But perhaps there was no panic at all about describing Jurgen Klopp as ‘cracking up’, and the headline was simply changed because some fool forgot the capitals. Never FORGET the CAPITALS.

A fine example of the genre can be found atop MailOnline‘s football site at 12pm on Thursday:

‘Leeds’ £26m striker who could stun Liverpool, Timo Werner leading Chelsea’s revolution and a familiar face lining up for Arsenal… the star signings you MUST watch in the Premier League this weekend’

Do we not have a CHOICE?

Proper naughty
Mediawatch agrees with The Sun’s Dave Kidd that ‘audacious footballers’ are needed by England and that Phil Foden and Mason Greenwood should eventually come back into the fold, though whether Gareth Southgate really needs ‘proper little rascals’ is up for debate. The idea that every talented footballer is mischievous sounds a little outdated in the era of Lionel Messi being a) the actual best footballer in the actual world and b) incredibly dull.

Kidd predictably harks back to 1996 and Paul Gascoigne, writing:

‘What if Terry Venables, the predecessor Southgate admires most, had erred on the side of caution and not selected Gazza for Euro 96?

‘Perhaps slung him out after those Hong Kong dentist chair high-jinks?

‘There’d have been no England player with the sheer cheek to imagine lobbing a Premier League-winning centre-half, swivelling, volleying home and staging a magnificent goal celebration all without breaking stride.’

What if indeed? Would England have not reached the semi-finals of a European Championship on home soil?

It’s so funny how we don’t talk anymore…
On the subject of Mason Greenwood, Kidd’s Sun colleague Martin Blackburn tells us that he will ‘hold talks with Manchester United boss Ole Gunnar Solskjaer’. Does anyone else miss the days when people just, well, talked?

Bye-bye title, title bye-bye…
Over at the Daily Mirror, Gary Neville’s quotes about Manchester United make the back page, though he absolutely does not ‘warn’ that Manchester United ‘will slip further behind Liverpool and Manchester City’ at all; he simply quite rightly says they will not bridge a 33-point gap unless they make signings.

But it’s the headline on p56 that made us laugh…

They finished 33 points behind Liverpool; even the most one-eyed Manchester United fan does not think they are about to win the bloody title. What fool would ever think that?

Do you get high? Does your daddy cry?
Obviously, by the time Gary Neville has been through the online Mirror click machine, we get here:

And apparently he ‘has given his verdict on which teams will finish in the Champions League spots this season – and his predictions are sure to raise eyebrows’.

Or they would if he was being remotely serious. The man literally said these words: “Can it go next to this that I don’t actually believe this but this is what I want? I’ll go City, United, Liverpool, Chelsea.”

No, Gary, it cannot say that anywhere near the headline because nobody would ‘raise eyebrows’ at a prediction that is not actually a prediction.

Do you have to let it linger?
Elsewhere on the Mirror website, this is a doozy of a headline:

‘Lingering issue’? A lingering issue would be a dispute over a shirt number or whether he can hire a private jet in time to make his debut next week.

A ‘lingering issue’ is not a complete lack of agreement between the two clubs involved in the transfer, without which absolutely f*** all can happen.

He’s 16. Sylvain, you are a glorious shithouse.

Recommended reading of the day
Richard Jolly on Arsenal