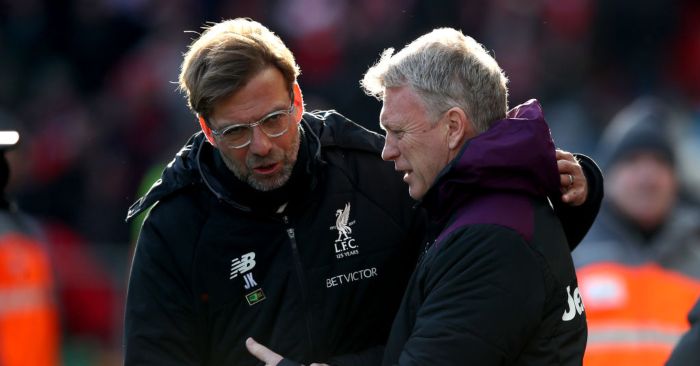 Jurgen Klopp and David Moyes ‘have privately indicated a willingness to take a pay cut’.

Eddie Howe and Graham Potter have both foregone at least a portion of their wages during the suspension of the Premier League due to the global pandemic.

It is expected that ‘the majority’ of their fellow managers will do the same, with talks having taken place over the last few days.

Klopp and Moyes have expressed ‘an acceptance of the need to make cuts within the 30 per cent limit’.

While players have shown a reluctance to do the same due to ‘fear’ over whether the money saved would benefit clubs instead of the NHS and other related hospices, managers and executives are free to negotiate cuts or deferrals individually.

The Daily Mail say that the League Managers Association ‘are providing advice and legal assistance’ but, unlike the PFA, ‘are not engaging in the public debate’.

All 20 top-flight managers were included in a ‘tense’ conference call between club captains over the weekend, but were only ‘observers’ with Mark Noble, Troy Deeney and Kevin de Bruyne the only players permitted to speak.

Despite talks between players, clubs and the PFA reaching an impasse, managers like Klopp and Moyes will be free to strike their own deals as their cuts are considered ‘a private matter to be negotiated with employers’, with no need to enforce a collective agreement.