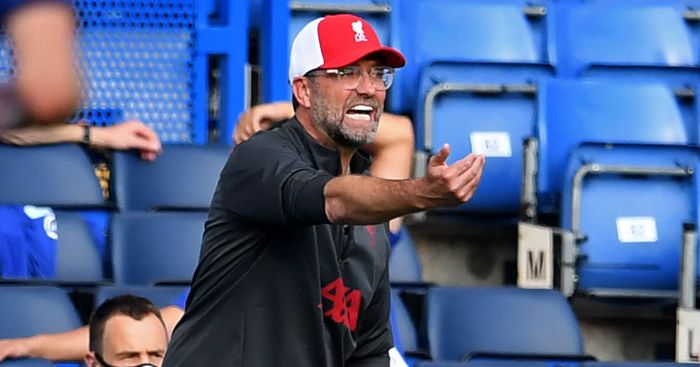 Jurgen Klopp has explained that he was shouting at a Liverpool member of staff and not any of his players after a Chelsea player was shown a red card in the Reds’ 2-0 win on Sunday.

Sadio Mane bagged his first league goals at Stamford Bridge as Liverpool pounced on defender Andreas Christensen’s dismissal, coasting to the win and even handing a second-half debut to new signing Thiago Alcantara.

Jorginho’s failed penalty twisted the knife for frustrated Chelsea, with the Italy midfielder losing his flawless Blues record of eight successful spot-kicks, and in turn destroying many an accumulator set up after using the bet365 signup offer that was being touted at the weekend.

Intervention from VAR saw Christensen’s initial yellow card upgraded to a red card as he got his marching orders – but Klopp took umbrage as a member of the Liverpool bench applauded the decision.

The Liverpool Echo claims that Klopp was heard shouting: “Are you crazy? We never ever do that, ok?”

Speaking about the incident, Klopp moved to clarify exactly what happened: “It was not one of my subs but another member of staff and I told him already what I thought and he is good with that. I am fine with that but in the moment it wasn’t what I wanted to see.

“I saw the sending off only in the situation. I saw Christensen’s arms around Sadio so I thought in the moment it is a sending off but I couldn’t see it back since then so if you have seen it differently, then I respect that.

“Would we have won it [if Chelsea had XI]? Who knows that! I thought we were good in the first half so I thought we could win it but if we would, I don’t know.

“That was already very good and I was ready for a very positive half-time talk with a few pictures on what we could have done differently, where we have to move quicker, pass quicker, easier and stuff like this. Then, the red card, yes and it changed the game.”