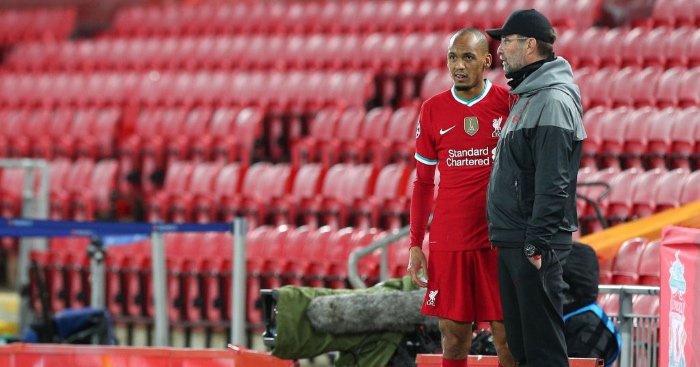 Liverpool manager Jurgen Klopp believes Fabinho’s injury against FC Midtjylland is the ‘last thing we needed’ as he joins Virgil Van Dijk on the sidelines.

Fabinho pulled up with what looked like a hamstring injury and had to be replaced by youngster Rhys Williams.

Despite the injury, Liverpool managed to grind out a 2-0 win at Anfield.

Diogo Jota continued his good run of form by finishing off a great Liverpool move. Trent Alexander-Arnold played a quick one-two with Xherdan Shaqiri before putting Jota through.

The Portuguese international easily dispatched of the chance to score his third goal of the season.

Mohamed Salah was then tripped in the box during injury time by defender Paulinho. The forward smashed home the resultant penalty to give Klopp’s men all three points.

Speaking about Fabinho’s injury, the Klopp told reporters: “Exactly the last thing we needed. I don’t know, he felt his hamstring so that’s not good. He said he could’ve played on but not sprinting so that doesn’t help. We will see, we will have to do a scan and see but clearly it’s not good.”

When asked about the overall performance, he said: “It was a tough night. It’s a bit like in a marriage, there are good and bad times. It’s not a bad time but it’s a tricky time. 100% we have to stick together and fight harder and that’s what the boys did tonight.

“Losing Fabinho in the first half… it’s a shock for the team because now we have to sort that injury.

“We had to make the change at half time with Jordan Henderson. He said ‘I’m fine’ but in these moments you have to be responsible and the plan before the game was to give him around 45 minutes so he would be okay for West Ham.

Their next match is in the Premier League against West Ham this weekend.