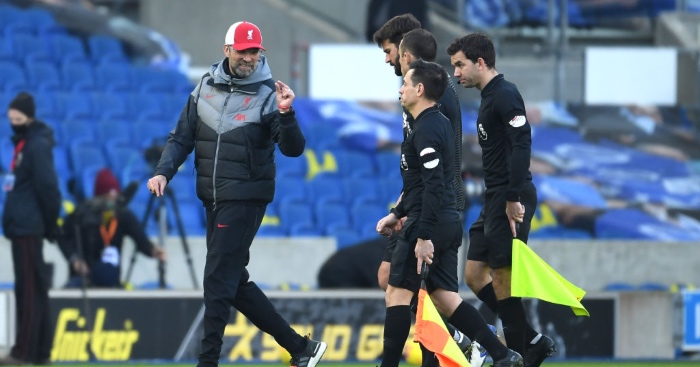 Liverpool boss Jurgen Klopp got into an interesting exchange of words with BT Sport following his team’s 1-1 draw with Brighton.

The German was angry at injuries to numerous players during the match, including James Milner.

The veteran midfielder went off with a hamstring injury during the second half.

The interview began with typical discussion about Liverpool’s performance.

Speaking to BT Sport’s Des Kelly, Klopp said: “It is how it is. I think the decisions were right.

“You try to create a headline. The ref whistled it. You try always, all the time. Today I say it wasn’t a penalty. What do you want me to say? I said it was a penalty because the ref whistled it, after watching it.

“I couldn’t be more proud of the boys for how they played today. We struggled a bit in the first half an hour with the new last line, because we didn’t drop in the right time.

“We sorted that but in the second half we had some problems with energy. In the situations around the goals, we were brilliant. Mo’s goal was a brilliant goal. Sadio’s header was outstanding. All good, it’s just tough times. That’s how it is.”

But then things got heated as Kelly disputed Klopp’s claims regarding the Premier League broadcasters and injuries.

Here is the interview transcription:

DK: James Milner, hamstring was it?

DK: What me personally?

JK: But you work for them, yeah. Hamstring, surprise, and they had injuries but ask Chris Wilder how we can avoid that.

JK: I don’t know how often I have to say it, you picked the 1230, not you personally, but you did it, us on 1230, between now and December and New Year, one more Wednesday…

DK: When you say picked the 1230, the Premier League clubs chose that slot, there’s a reason that slot is there.

JK: These are difficult times.

DK: Of course these are difficult times, the stadiums are empty, the broadcasters are supporting the game.

DK: Your chief executive should be with the other chief executives having that discussion, if you come down here and just have a go at the broadcasters it doesn’t go anywhere, it’s not going to change anything.

JK: I’ve not had a go at the broadcaster, I just say how it is. After Wednesday, Saturday 12.30 is really dangerous for the players.

DK: But you also said the broadcasters don’t care and that’s the problem, it isn’t the problem.

DK: I didn’t pick it, every pick is agreed by the Premier League, every executive around that table.

JK: You always rely on things we agreed in another time, we did.

DK: If it was all about player welfare, why did the Premier League clubs block the five subs?

JK: Because, that’s very interesting now. When we had a talk between managers, a week ago, it was 55, if not 60 (per cent) for five subs. Since then nothing happened. Chris Wilder or whoever says constantly that I am selfish. I think all the things that shows is that he’s selfish. I was in a similar situation when I worked at Mainz and it was all about staying in the league, but they have three subs and one point if I am right. If you can’t do five subs in a game like this, it’s not for tactical reasons. Today, five subs, I take off Robbo to save him, not to make our game better, just to save him. It’s not about we change tactics and system and stuff, and bring five players, it’s just to save the players. Of course I save my players but it’s all players and from now into December you will see it.

DK: We agree with you, and I can understand what you’re saying, but you’re going about it in a strange way, you’re attacking the broadcaster instead of getting the support you need in the Premier League meeting.

JK: What I want to say is, I only go for broadcasters with a Wednesday and 12.30 (Sat) and only seven managers have a similar problem and they all agree. Jose said now I should stop doing it, I wanted to stop doing it because it doesn’t help, but the problem is the contract. Yes, our CEOs, shareholders did that and it’s not a problem but in this season it’s a bigger problem because of no pre-season, the intensity, because of the shorter season. Have a look how many, I speak about Liverpool, we had this slot three times, no one else, of course it’s a problem for me, it’s a problem for me to pick a team, that’s my problem.