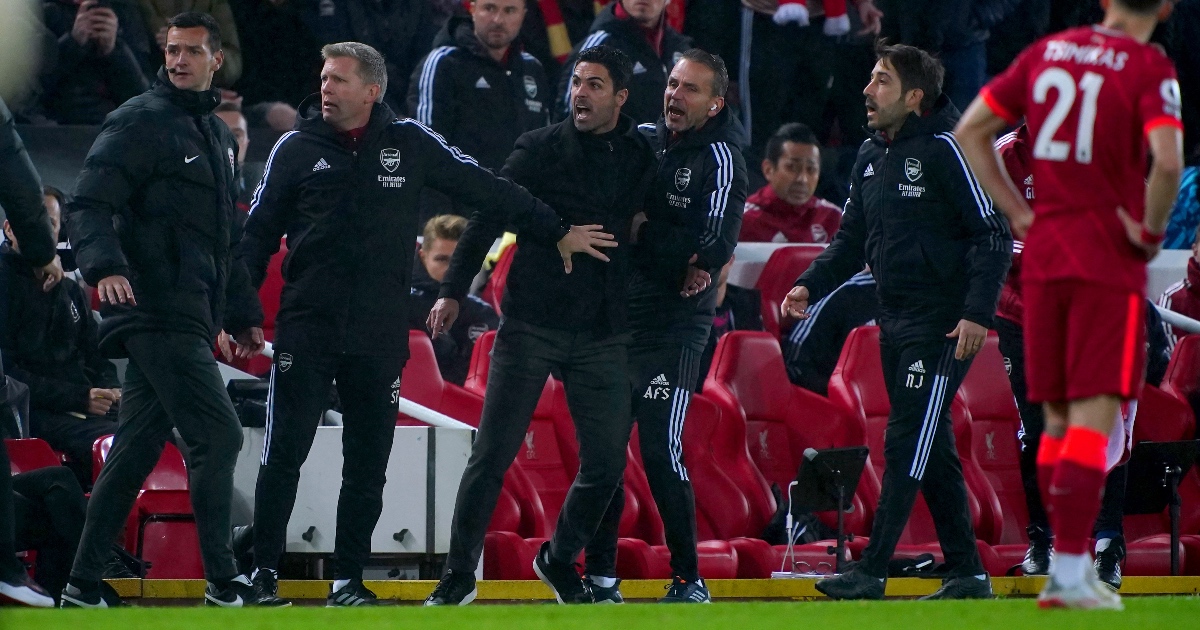 Jurgen Klopp has revealed the reason behind his altercation with Mikel Arteta in the 4-0 win over Arsenal on Saturday.

Goals from Sadio Mane, Diogo Jota, Mohamed Salah, and Takumi Minamino secured an emphatic home victory for Liverpool but the first-half was far from comfortable, as the hosts struggled to find their rhythm while Arsenal posed a threat on the counter-attack.

Arteta cut an agitated figure on the touchline and tensions boiled over at the half-hour mark when the Spaniard took issue with an elbow from Mane on Takehiro Tomiyasu.

Klopp saw nothing wrong with the incident and made his feelings clear to Arteta, who reacted furiously.

“With the situation, Sadio didn’t touch the player,” the German told talkSPORT.

“Then they go up and ask for a yellow card. It happens against Sadio so often. It happened against Real Madrid last year and he couldn’t do anything because the ref was on him saying ‘one more thing and you’re off’.

“For an offensive player, he’s not a hard player or crazier tackler.

“For Atletico [Madrid] here [at Anfield], we had to take him off at half-time because they tried to decrease our number here.

“I just asked: ‘What do you want in that situation?’ To show yellow cards for no contact, otherwise it would be a crazy game.”

Arteta, meanwhile, tried to play the confrontation down, insisting he and Klopp were merely “defending” their teams.

The win puts Liverpool in second-place and narrows the gap with league leaders Chelsea to four points.

Asked if the performance was flawless, Klopp replied: “No. Perfection was not the word I had in my mind since the game finished but I thought we did really well.

“We cannot take these kinds of performances and goals for granted and we will not, but the international break is not a great time.

“It’s not just a problem for us, but we lost the last game and the boys go all over the planet.

“Then they came back and it’s bits and bobs there and we have just one session to prepare for the game against the in-form side in the league. So it’s tricky.”