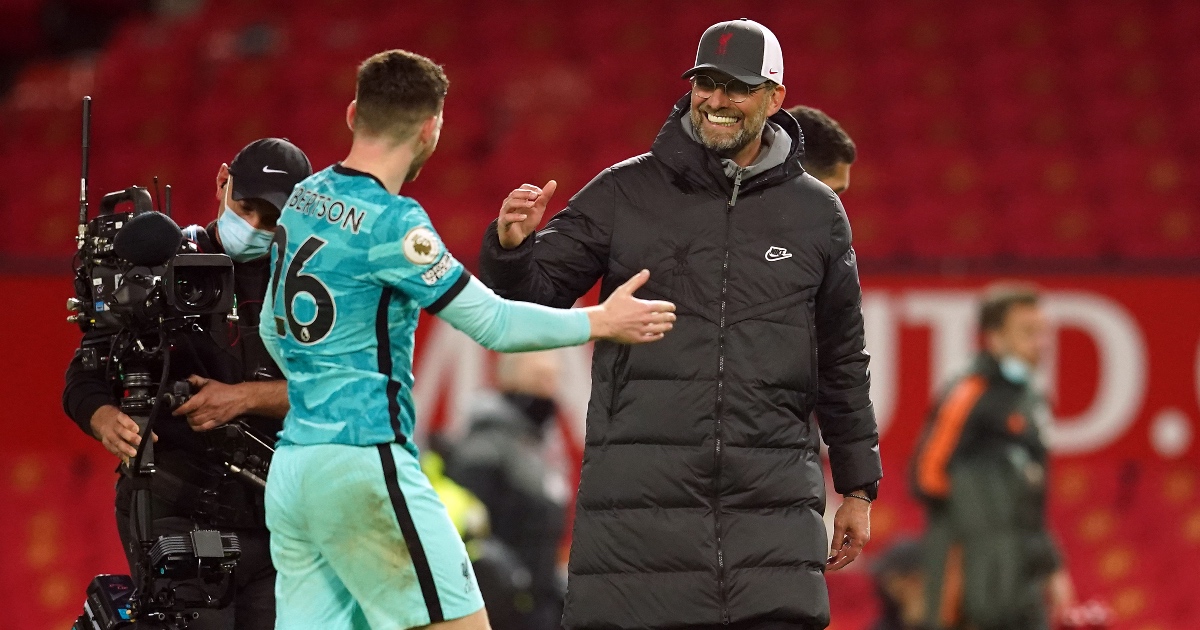 Jurgen Klopp has praised ‘outstanding’ Liverpool for showing ‘great fight’ in their win over Man Utd.

The Reds started slowly at Old Trafford but went on to record a comprehensive victory on Thursday night which could prove huge in their top four push.

Goals from Diogo Jota, Mo Salah and a Roberto Firmino brace helped them on their way to a 4-2 victory. It was also the first win for Klopp at Old Trafford as Liverpool boss.

But the Red Devils couldn’t hold on for long as their defence looked weak without skipper Harry Maguire.

Jota flicked a Phillips shot into the United net for Liverpool’s equaliser.

A Roberto Firmino header in first-half injury-time put his team in the driving seat.

Whatever Ole Gunnar Solskjaer said to his players at half time, it didn’t work as Liverpool went 3-1 up two minutes after the break.

A catalogue of errors allowed Trent Alexander-Arnold to shoot at Dean Henderson. His save ultimately played in Firmino, who finished confidently to secure his brace.

Marcus Rashford pulled one back for United but Liverpool had the last laugh through Salah. He raced in behind and beat Henderson to secure all three points.

Reacting to the victory, Klopp told Sky Sports (via BBC Sport): “Great fight, good game, intense – all derbies should be – and my first win at Old Trafford. Good timing I would say. We needed it. We deserved it. All good.

“We didn’t do that well in the first 15 minutes but then we got control and we could play the way we wanted to play.

“It was good. All good performances. Our two centre-halves were a little shaky at the beginning of the game with passes but then did a really good game. Trent was in proper shape tonight and played pretty much everything.

“They couldn’t chip the ball through to Bruno Fernandes any more and step by step we got control of the game. It was of course tricky at 3-2 but we scored that fourth goal. We needed that. It was very intense.

“I really thought the midfield played outstandingly well. When Curtis Jones came on he helped a lot. It was good.”