Home All The News Klopp: Meeting Maradona was like ‘meeting the Pope’ 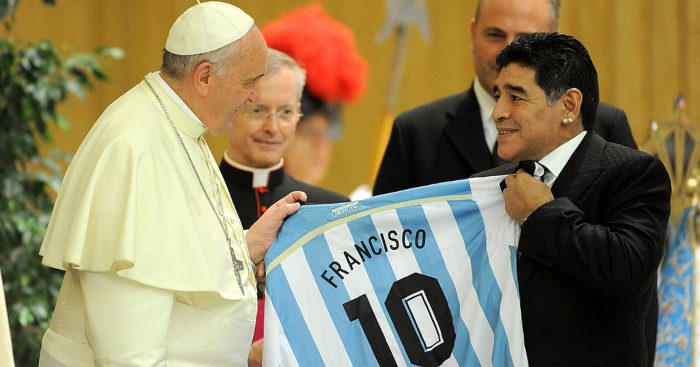 Liverpool boss Jurgen Klopp has compared meeting Diego Maradona to “meeting the Pope” after the Argentina legend’s death this week.

Maradona, regarded as one of the greatest players of all time, died on Wednesday after a reported heart attack.

He inspired his country to World Cup glory in 1986, and also helped Napoli win the Italian league title in 1987 and 1990.

Klopp had the pleasure of meeting Maradona once and has described what it was like to meet the superstar.

Klopp said: “The best through my lifetime. Maybe it is not right anymore because I have seen Cristiano [Ronaldo] and Lionel [Messi] many times now as well. In my own playing career he was the stand out player.

“His life I think shows how nice and how difficult life can be when you are a world class footballer.

“I met him once. For a player of my level meeting him was like meeting the Pope.”

Meanwhile, Liverpool are currently second in the Premier League this season with the likes of Spurs and Chelsea making solid starts to the new season too.

And Klopp predicts an “interesting season”, he said: “A lot of quality in the squads of these teams. They all played so far a really good season so far.

“Not surprised Spurs and Chelsea are there. Southampton look really good, Leicester we played only a few days ago and know how good they are. A sign it is all close together this season. It is a difficult and interesting season for everyone. There are a lot of chances for teams.”