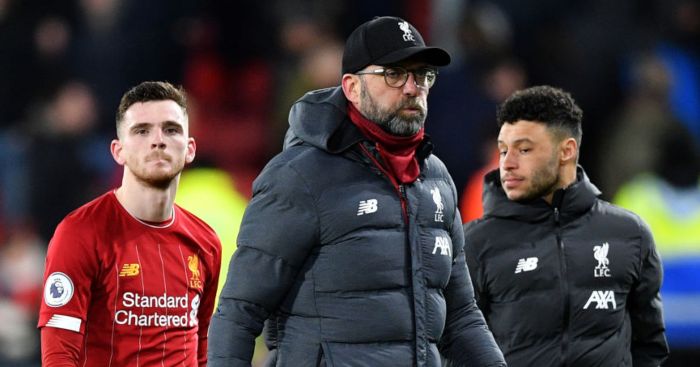 Jurgen Klopp is happy that Liverpool “can play free football again” after Watford brought their record-breaking run to an end.

Watford stunned the runaway Premier League leaders with a deserved 3-0 win at Vicarage Road on Saturday.

The Mailbox has already dissected the defeat, with Klopp detailing “the biggest surprise” of the loss.

It was an unceremonious climax to a remarkable sequence in which Liverpool equalled the record for most consecutive victories in England’s top flight, but fell six games short of breaking Arsenal’s 49-game unbeaten stretch.

Klopp said that there was “not really” any particular disappointment at that run ending, “because I don’t think you can break records because you want to break records”.

He continued: “You break records because you are 100 per cent focused on each step you have to do, whatever record it is – a marathon or whatever – and for that you have to perform.

“The boys performed and that’s why we won the games, but tonight we were not good enough and that’s not now a plus for me that I think in history, when they look back in 500 years and will say ‘Liverpool nearly did it’.

“That’s not my main concern, you cannot change that and it was always clear, sometime we would lose a game. We didn’t wait for it, but it was clear it would happen – we didn’t think about it, but we knew it would happen and tonight it happened.

“Now I see it rather positive because the closer you come to these records…I am not bothered, but I am not sure how other people think about it, so now on we can play free football again, we don’t have to defend or try to get a record, we can just try to win football games again and that is what we will do.”