Home Johnny Nic Is Klopp one of last true heroes in the Blart Age? 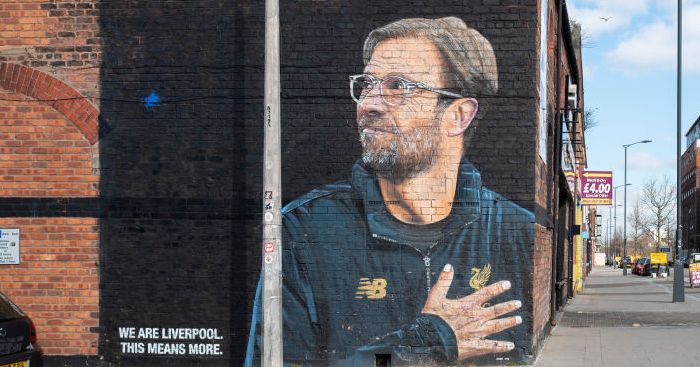 Each Friday my Everybody Loves… column (Juninho was last week) celebrates a player who is widely loved and I always ask for people’s comments. Sometimes the degree of passion people have for a player is quite remarkable. Almost as if they are a member of their own extended family.

This is something that non-football followers miss out on. That powerful bond that we have with a player or manager – albeit anonymously and at a distance – is like no other. I can’t think of another walk of life where the same kind of relationship between performer and audience exists. While we might admire or envy musicians or actors, it isn’t quite the same sort of intimate thing. The reasons for feeling so strongly can be many and varied and not just for being a top goalscorer or goalkeeper. Sometimes it’s just someone who you admired as a man. It is a kind of distanced and unrequited friendship. Paternalism, perhaps. We gain something from our admiration of them. It is enriching to hold players and managers in high regard and to place that regard in aspic, long after their playing days are done.

This weekend, on the death of Jack Charlton, I found myself very moved by old footage and interviews with him and I won’t be the only one who shed a tear. And again, it struck me how unusual this was. I mean, obviously, I didn’t know the man, and yet it felt as though I did. It felt like Jack had been in my life, all my life. Like a relation, perhaps, who pops round on birthdays, Christmas and holidays, he was a familiar, comforting sort of presence. A pillar upon which life was built.

When Big Jack took his first managerial job at Middlesbrough at the start of the 1973-74 season he was only 38, but it seemed like he was 30 years older. He smoked fags, liked a pint, wore a sheepskin coat, shouted very loudly and basically looked like every gadgee that you’d find down your local social club.

This factor lives on as one of the reasons he is still so revered on Teesside. He was straightforward, honest and blunt in an area that valued those qualities greatly. So he was loved as a man and as a personality; add that to the record 15-point win of the second division in that first season that earned him the Manager Of The Year award, and a Boro legend was forever made.

It is in the furnace of such achievements that these strong football relationships are often forged. Obviously, to some degree these feelings are an adventure into nostalgia. A look back to happier, less stressful times when you were young and when life was less complicated.

Rightly or wrongly, almost all of us believe football was better in the old days – whenever those old days might be to us – so it is natural to feel affection for some of the people who made our memories. Nostalgia for players and managers can be a turned corner in the book of our life, marking specific times and places and people. That’s a very powerful thing and should not be lightly tossed aside or readily dismissed.

Writing the Everybody Loves…column has shown me that we need to treasure and value where and whenever we can, because if we don’t, we will have nothing to look back on with the warm glow of recollection. But I now worry that this important aspect of the game is in retreat. My pieces usually dwell on a player from 15-25 years ago; an entirely different time and culture. Can this aspect of the game survive the social media era? We’re so much more profoundly distanced in so many ways from players and managers now. Can it survive these days of mega-money and intrusive coverage? Is it becoming a thing of the past?

Until the last couple of decades, we didn’t really know much about players beyond what their favourite meal was from a Q & A in Shoot! (always steak or fish and chips) There was no evidence of off-colour Tweets from six years ago, no compromising videos of a hotel room romp, no heartfelt apologies written by their agent for leathering someone in the face outside a nightclub, or for hosting sex parties.

In short, if you liked a player or a manager for any reason, you could never really learn anything that might put you off them. As hard as it might be to imagine, there was a time when the press wouldn’t even report a player’s indiscretions, not wanting to embarrass or cause trouble for them and, of course, no-one was able to capture a wasted player taking a kip in a skip on their phones.

In the age of social media, today’s hero very quickly becomes tomorrow’s zero and the following day’s hero once more; always either an angel or a devil. We hesitate to select our heroes or legends because we’re so aware that at any moment our choice may be shown to have done or said something that isn’t acceptable and then you will be seen to be on the side of people who do bad things and no-one wants that. It has all made us hard-bitten and cynical.

It isn’t helped by the rush to praise players. Ordinary, simple acts of decency or kindness by a footballer are now often vaunted by fans as though the work of a saint and not simply commonplace. Equally, a minor indiscretion can be blown up into a crime against nature. Such overreaction whether positive or negative isn’t healthy. It seems childish and immature and shallow; each is now a reaction to the other in the polarised social media universe.

So it wouldn’t be surprising if we psychologically fear pinning our colours to the wrong mast and unwittingly endorsing someone who proves to be some shade of rotter.

With these trends in play, I do wonder if this sort of long term fan-manager-player affection will be as commonplace in the future. Everything seems more disposable, including players. They pass through clubs in greater numbers and speed than ever before, so there’s less time to build up an emotional bond or relationship in your head with them. And with players often separated from normal life by the tinted windows of extreme wealth, they’re far less likely, or indeed able, to go down the club for a pint when there’s always someone who wants to have a go at you, their anger drummed up on social media, their pals waiting with their phones ready to capture their mate laying one on a big player and become a social media sensation for 36 hours. What a world.

Your love for a player or manager used to be quite a private, personal thing. After all, this sort of relationship is utterly one-sided. You don’t know the person, really. You’ve probably never even met them. So your affection was a creation of your own making, sculpted out of your own imagination from what information you could glean about them and out of what you see with your own eyes on the pitch.

Before we all became individual global publishing empires, this would have been kept between yourself and a few pals but now you can broadcast it to anyone, and anyone can rubbish your affections and mock you for them. That’s not a nice feeling and can even be upsetting. So maybe better not to cultivate those feelings at all in order to protect yourself.

That being said, when big lovable personalities combine with big success, the way Jurgen Klopp does, it is impossible to believe he won’t be revered for the coming decades like Shankly et al before him. But then, he is probably an exceptional outlier. There’s only one Jurgen Klopp.

I certainly hope these ‘relationships’ we have always built with footballers remain part of the game because they evolve beyond nostalgia into beacons in the dark and stormy nights of the soul, beacons which can help guide us safely back to the shores of sanity, later in life. A reminder that not all is bleak all the time. We all need soul food and our recollection of footballers can feed us.

If it becomes less and less commonplace, lost in the idiot blarting of social media, we will have lost a lot of the ties that bind. Football reduced to an exhibition played by largely anonymous people, few or none of whom we have any admiration or affection for, who we will look back on with little warmth, would be a much diminished sport.

The football we watch today is another thread in the warp and weft of our lives, the more disposable it becomes and the less we get out of it, the more threadbare the tapestry of our own existence will become.